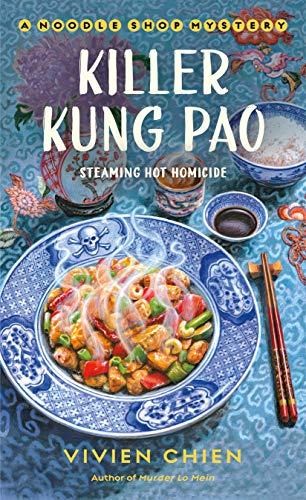 Is life at the Ho-Lee Noodle House becoming too hot to handle?

Lana Lee’s plate is already plenty full. Running her family’s Chinese restaurant in Cleveland’s Asia Village is challenging on the best of days. But just when Lana thinks she might be able to catch her breath before the weekend—which she’s eager to spend with her equally overworked boyfriend, Detective Adam Trudeau—Lana witnesses a car accident in the parking lot. And now she has no choice but to get involved.

June Yi, of Yi’s Tea and Bakery, is a serious businesswoman well-known for her heartlessness. But June meets her match when she rear-ends the Cadillac belonging to Mah Jong lover Mildred “Millie” Mao. As each woman curses—and threatens—the other, it becomes clear to Lana that trouble lies ahead. Still, who could have imagined that Millie would end up dead at the beauty salon? The evidence suggests that she was electrocuted while having a foot bath, and all eyes are on June. Can Lana find a way to solve this case before another fatality occurs in Asia Village?


“Lana Lee, you’re the only person in this world who would choose to dye their hair gray,” my sister, Anna May said, scrutinizing the photo of a sassy model with the hair color I wanted for myself. I had been carrying the picture around in my purse for inspiration. “Are you sure this is a good idea?”

“First of all, it’s not just any gray,” I replied, grabbing the photo out of her hand. “It’s gunmetal gray. And second, of course it’s a good idea. It’s gonna be my best hair yet.” I ran a hand through my pink peekaboo highlights. The color was beginning to fade, and I was tired of keeping up with one of the weakest colors in the rainbow.

“I don’t know why you can’t just leave your hair alone. You’ve been on this bizarre hair-dyeing kick for a while now. Don’t you want to give it a rest before you damage your follicles any further?” Anna May, who was slightly older and much more reserved than me, tucked a lock of smooth, glossy black hair behind her ear, exposing a dainty pearl-drop earring. Her typical hair length was always just a little past her shoulders, except on the rare occasions when she broke out a curling iron.

Everything about Anna May was classic. Her makeup was forever neutral and appeared almost nonexistent. Her nails were either cherry red or French manicured—never anything besides the traditional white tip. And her style of dress often reminded me of things you might find in Jackie O’s closet. But it worked for her, and I would begrudgingly agree that my sister was a beautiful woman.

I, however, was the total opposite and staunchly refused to look anything like her. As previously mentioned, I like to mix up my hair color, and lately have been experimenting with more unnatural hues. My nails are whatever shade I feel fits my mood or the season, and my makeup … well, I own every color of eye shadow that exists. As they say, variety is the spice of life, and I like a vibrant life.

I waved her concern away with the folded-up photo before stuffing it back into my purse. I wasn’t going to let her sensibilities rain on my parade. After all, it was my favorite time of day: five p.m. on a Friday, and I was getting ready to leave work, where I’m the manager of my family’s Chinese restaurant, Ho-Lee Noodle House.

Was it my lifelong dream to end up working for my parents and to leave work smelling like sweet and sour sauce on a daily basis? No. But it was actually working out pretty well despite my original protests. Turns out that I like to be in charge of things. Even better, I was good at it.

But it was now the end of the workweek, and after a long five days of managing the daily functions of the noodle shop and dealing with the public I was thrilled for the weekend to begin. The next morning, I would be pampering myself at the salon, Asian Accents, and my stylist, Jasmine Ming, was as excited as I was to be dyeing my hair this stunning shade of gray.

So even though I wouldn’t be on the clock tomorrow, I would still be headed to Asia Village, since both Asian Accents and the Ho-Lee Noodle House are under the same Asian-inspired roof. Located in the quaint suburb of Fairview Park, the Asian shopping center is about twenty-five minutes away from Downtown Cleveland. If it’s me driving though, I can make it in about seventeen. But don’t tell my boyfriend—he’s a cop.

The enclosed plaza has everything you could think of under its sky-lit roof. In one fell swoop, you can get your hair done, purchase books by your favorite authors, grocery shop, have dinner, update your cosmetic collection, enjoy a doughnut or three, and even sing some karaoke, if it tickled your fancy. I haven’t even mentioned the fact that you can also stock up on tea cakes, or find the perfect supplements and herbs to compliment your new healthy lifestyle. After all, you might need something to counter all the doughy goodness you purchased from Shanghai Donuts.

Our family’s noodle shop has been at the plaza since before I was born, and I’d spent more time within those four walls than I’d care to admit.

Anna May had in recent months taken an internship at a prominent law firm in Cleveland—Andrews, Filbert, Childs & Associates—so her ability to lend a hand at the restaurant had become extremely limited. But since our evening helper and resident teenage thorn in my side, Vanessa Wen, was currently out with the stomach flu, Anna May had agreed to give up her Friday evening to help out. There’s nothing worse than a twelve-hour workday in my book.

“Seriously, Lana, how long are you going to maintain this lifestyle? You’re twenty-eight years old now—and before you know it, you’re going to be thirty—and you don’t take care of yourself at all. Things don’t get easier as you age, trust me. You eat horribly, you don’t work out, and you’re not even trying to look like an adult.”

I swear that I tried to withhold my eye roll, but sometimes it just happens without me realizing it. This is what my sister is best at. Lecturing me. Even though she is a measly three years older than me, she acts like she’s about ten. And she has all this “worldly” wisdom to pass down to her incapable younger sister. Lucky me. “I don’t see what my hair has to do with any of this.”

“It’s a gateway, Lana. You’re not taking life seriously, and it’s showing in your hair.”

I gaped. “That is the most ridiculous statement I have ever heard in my life.”

“You refuse to grow up.” She folded her arms over her chest and lifted her chin. “I think this new rebellion says it all.”

“New rebellion?” I snorted. “Me dyeing my hair is not a rebellion. And I think I’m doing pretty well considering. I mean, after all, I am running this restaurant. And doing a bang-up job, I might add.”

I held up a hand. “Henry says? So, is your new love interest the reason why you’re giving me this lecture? Unbelievable.”

Anna May had recently started “casually dating” one of the partners at her fancy law firm, which I was pretty sure wasn’t the best idea, but did that stop her? Of course not. My sister often found justification in her own actions because she considered herself to be the most level-headed person on the planet.

She held her head even higher. “Henry says that personal presentation is everything. You are your own representative, Lana. Do you want people to view you as this immature, young woman who constantly chooses to go against the grain of society?”

I started to dig in my purse for my car keys. She was just getting on top of her soap box, and I had plans to meet Adam for happy hour at the Zodiac, a local bar where my best friend and roommate, Megan Riley, bartended. I didn’t want to give up any more of my personal time listening to this drivel.

Anna May continued spouting at the mouth while I tuned her out. I heard something about how I would have never fit into the lifestyle I had previously hoped to have for myself. And maybe she was right. A year ago, I’d daydreamed of being a glamorous businesswoman with a corner office and enough high-powered suits to overflow a walk-in closet. But that fantasy had died the minute I walked out of my previous job. After all, you can take your boss flinging papers in your face only so many times before you have to say enough is enough.

“I’m going now,” I said, talking over her rant. “Adam is waiting for me at the Zodiac.”

“Oh, don’t even get me started on how you’re always wasting your time at that stupid bar.” Anna May uncrossed her arms, and put her hands on her hips, mimicking our mother’s lecturing stance. “I hope you don’t have a drinking problem on top of everything else.”

I let out a deep groan and flung my purse over my shoulder. “Thanks for helping out tonight,” I said, unwilling to dignify her statement with a response—much less a justification. “I’ll talk to you later. Call me if there’s an emergency.”

I started to walk out of the restaurant, dropping my usual shuffling steps and taking the long strides that I normally reserved for high heels. I’d manage to keep my cool and not engage in a screaming match with my sister as I’d been well known to do. And she said I wasn’t mature. Ha.

But my swagger was quickly ruined because just as I was about to exit the restaurant, Ian Sung, property manager to Asia Village, was walking in and blocked my exit. Damn. So close to freedom.

“Lana.” Ian, who was impeccably dressed in a navy blue Italian suit and polished light brown dress shoes, gave me a once-over. “Are you on your way out for the day? There’s something I wanted to discuss with you.”

“Can we walk and talk?” I asked him. “I’m running late for an appointment.”