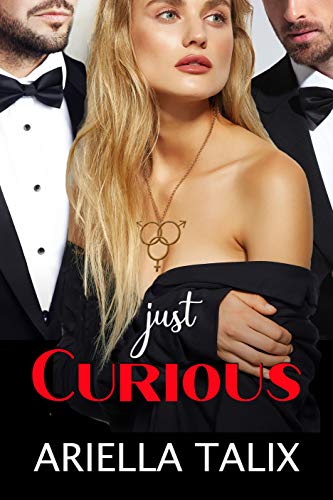 "This book is amazing. There's nothing bad I can say. The plot is interesting, hot and at times very thrilling. It moves along fast enough for you not to get bored but still you can keep up. The suspense adds a sudden, very welcome twist to the story and I was hooked from the start. The characters are also great. " *****

"We loved your book!"

"Jackson is the sweetheart, Willa is the bold adventurer, and Casey is the bad boy with the heart of gold. I love them all. Holy hot sex scenes, Batman!"

Willa Camden, a successful author of steamy novels, becomes entwined with Jackson Mitchell, a brilliant billionaire, and his best friend Casey Melrose. Their love is shared equally, and Willa is not always in the middle.

Craving excitement, they embark on international adventures in the style befitting a billionaire.

Cyber threats, blackmail, and theft turn their world upside down. Their careers are jeopardized, and lives are in danger.

Fair warning: They curse a little and have sex a lot, so please don't be shocked. Join them for a wild ride.

If you're ready for a book that will have you on the edge of your seat and grabbing for a fan, this story is for you.

Willa Camden squinted at the television.  She was trying to figure out how she knew the woman giving her acceptance speech at the Oscars for Best Original Screenplay.  Willa recognized the grating tone of the woman’s voice and the fake smile with overly whitened teeth.  She appeared to be in her early to mid-thirties.  The woman simpered at the audience and clutched the statuette to her chest.  Her angular face was covered in gaudy makeup.  It was too bad, Willa thought.  If she hadn’t been so made-up, she might have been attractive.  Unfortunately, her brassy-blond hair had a terrible case of dark roots.

“There is something so familiar about her…” Willa muttered to herself.  She was certain they’d met.  Her name appeared on the screen: Deb Abbey.  It didn’t ring any bells; she certainly wasn’t one of the screenplay writers Willa knew.

“I’m so proud of this work,” Deb enthused nasally to the audience.  “It started out as a novel, but I just saw everything in my head so vividly, I changed the work over to a screenplay about a quarter of the way through.  Thank you to the Academy and to the actors, director, and the entire crew who brought my words to life so wonderfully.  I can’t name you all, but you know who you are.  And thank you to the people who inspired me.”  Music played, and Deb turned to head offstage.

Huh, not much of a speech—especially for a writer.  Dying of curiosity, Willa grabbed her laptop and Googled the movie—which was apparently new—to see if that would give her any clue about the writer’s identity.

Within seconds, she had the trailer booted up.  Her face went scarlet, and she began to shake.  Like a ton of bricks, the memory of meeting “Deb Abbey” came back in a rush and settled in her chest, crushing her.

“Fucking bitch!” she hollered at her laptop as her world blew apart.  Willa jumped up and thundered around her house, finally deciding she needed to get outdoors before she broke something in her rage.  She went to the fireplace where they’d always kept a bowl of smooth beach stones.  She loaded up her pockets and ran for the door where she kicked off her shoes.  Thoughtlessly, she flicked on the backyard lights and stomped down the stairs to the beach, where she ran to the water’s edge.  Hot tears poured unchecked down her face.  She hadn’t even locked the door behind her.

Jackson Mitchell was looking idly out his back window as he contemplated his next business venture.  The sunset over the Pacific had long since faded to night, but he still stood there in his dark house, looking at nothing.  His brain did that to him sometimes.  He could be so deep in thought, he forgot about his surroundings.  He’d only recently bought this house, and its location right on the La Jolla Shores beach comforted him.  It was a place where he could be creative.  The soothing sound of the water and the glorious sunsets sucked him in.  As soon as he set foot inside, he had made an offer on the spot.

He blinked, pulled from his reverie when the neighbor’s yard lights went on, illuminating their shared stairs down to the beach and much of the sand beyond.  Jackson caught a glimpse of a woman running toward the water, her long blonde hair flying behind her in silky disarray.  She was slender and dressed in yoga pants and a lightweight hoodie.  He knew she had to be chilly on a windy night in February, even if this was southern California.

Jackson frowned at the sight of her.  Her jerky movements projected the message that she was extremely upset about something, and this was made even more clear when he heard her screaming at the top of her voice.

He couldn’t take it.  This was someone in need of help.  Jackson grabbed a jacket by the door and took off after her.  When he reached the sand, he kicked off his shoes.

As he drew closer to her, he could see that she was repeatedly wrenching something out of her pockets and heaving it at the water.  Each time she hurled whatever it was, she screamed profanities at the ocean.  They were pretty colorful.

“Um, I’d ask if everything is okay, but clearly it isn’t.  Want to talk about it?”

At the sound of a voice close behind her, Willa whipped around, looking like a terrified animal.  “What?” she gasped, clutching her heart.  “You scared the shit out of me.”

“Sorry, I don’t mean to startle you.  Is there anything I can do?”  Jackson realized then that her eyes were pale blue but currently rimmed with red as if she’d been crying.  And she was shaking like a leaf.  “I’m Jackson Mitchell, your new next-door neighbor.  Sorry I haven’t been over to say hello yet.  I was working up the courage to come ask to borrow a cup of sugar.”  He shot her a disarming grin, but she just stared at him.  “…Now probably isn’t the time, I’m guessing.”

Willa surveyed him carefully.  He had a charmingly crooked smile and earnest blue eyes.  She had to look up to gaze at him; he was tall.  His dark, wavy hair was tossed about in the wind, and his scruff gave him a distinctively masculine look.

She smiled at him ruefully, despite the fact that she was currently angrier than she’d been in years.  Looking back toward the water, she answered, “I don’t think anyone can help.  It’s a done deal, and I’m an idiot.  Thanks, though.”

She pulled another rock out of her pocket and heaved it into the ocean, giving a hefty grunt with her effort.  Just then, a wave swept in and covered her feet and ankles with freezing ocean water.  She gave a squeak and a little jump and shivered.

“That’s an interesting anger management technique you have, unless there’s a fish out there that’s been causing you grief.  Were those rocks?”

Out of ammo, Willa stuffed her freezing hands into her pockets.  She turned to face Jackson and said with a sniffle, “Yeah.  It was my dad’s favorite way to relieve stress and burn off anger.  It’s surprisingly effective.  I’m Willa, by the way.”

“Willa Camden, yes, I know,” he replied.  When she looked at him in surprise, he added, “My real estate agent is a big fan of yours.  I think she kept hoping for a glimpse of you because she’s showed up unannounced a few times at the house,” he chuckled.  “After I moved in.”

Willa narrowed her eyes.  “Hmm… I think maybe that has more to do with you than with hoping to catch me.  Is she single?”

“Oh, yes.  She made that very clear.”  He said flatly as he looked into her eyes.  “Look, Willa, you’re clearly freezing.  Come back upstairs and let me make you a hot drink.  You can tell me what’s on your mind or not, but I’d lose my gentleman status if I ignored the blue lips and the shaking.”  At that, he whipped off his jacket and enveloped her in its instant warmth.  He put a hand in the small of her back and gently propelled her toward the stairs.  Once they were through, he locked the gate behind them and snatched up his discarded shoes.  He liked Willa’s comment about his real estate agent since it let him know she might be a teensy bit attracted too.

She was just about the prettiest thing he’d seen in ages, but she obviously had quite a temper.  He couldn’t help thinking as he looked at Willa that she was the quintessential, long-legged California beach girl—blonde, blue-eyed and beautiful.  He bet she would rock a bikini when the weather warmed up.  His real estate seemed more valuable than ever.

When they reached his door, they toweled off the sand from their feet, and he led her inside.