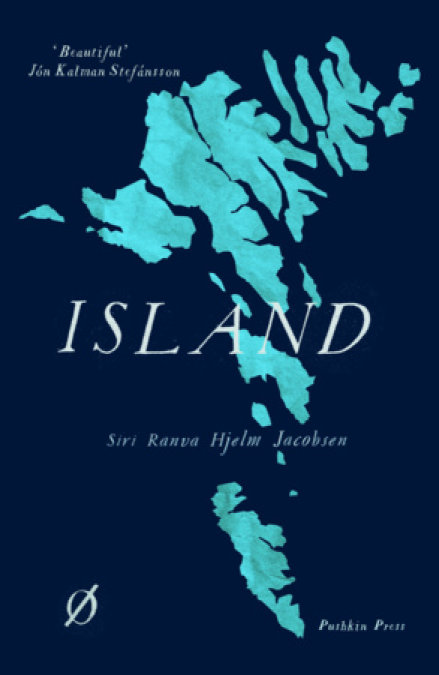 A young Danish woman explores her family's past and Faroe Islands ancestry across three generations. In the process she uncovers details of the passions and challenges her grandparents and their siblings confronted when they were her age, and considers universal themes of home and identity.

Family brings the young woman back to the Faroe Islands - the windswept, rocky northern archipelago where she has never lived but which she has always called home. There she finds her stories entwining with those of her ancestors as she searches for a way to connect with the culture and her kin. Rooted in the wild beauty of the islands and the author's own history, this is a bewitching tale of exile, homecoming, and what it means to belong.

Su›uroy
She stands with her back to the low copse of planted trees, looking down the mountain to
the village, blue in the August night, and the sheep that are like stones among unbroken
grass. Further off, the sea is sleeping. Vágs Fjord is still, blue on blue against the sky above
the ruler-straight horizon, strung taut between the headlands, a line only ghosts and
legends can walk.
Now she closes her eyes. Bending all her young will she follows the blue road: past
the Shetland Islands and Norway’s compact mountains, across the Kattegat and in over the
low land, the butter land, the fields, the farms – all the way to the Zealand market town
where Fritz must now be sleeping heavily.
Marita, her name is. She’ll be leaving soon, and this is where she starts: Su›uroy, the
southernmost island in the Faroes. Here the fjords are deep and the hills rugged. The
landscape is knottier and more abrupt than on Marita’s island, Vágar, but it’s the first one
you come to from the rest of the world.
In the country she’s going to there is a railway. She pictures the tracks sluicing
through the inhabited earth. People streaming away. Taking a train. You can get off
wherever you like. In a city, perhaps. Another city. A forest.
The trees sit up high in the uncultivated land further away from the village.
The pines are battered and young. Wind-swept.
She hears the noise.
From up here the village looks tiny. The houses doze, turned towards the fjord.
Their roofs catch the blue fore-light, shining palely like the crown of an infant’s head.
Vágs Fjord is long and thin, a sausage of water between the mountains, which the
currents of the sea have munched at. Au revoir, doll fjord. She thinks it. There’s more to life
than this.
She wants to hitch up her dress, take a running jump, sail clear over all of it – the
parting, the journey. Now she’s in the new country, now she’s walking down a flat, paved
street and into a house that smells of wood, and there stands her fiancé, there stands Fritz,
as if no time has passed since they were separated, just turning and saying, ‘Oh, there you
are.’ Just like that.
She spits. The taste of resin fills her mouth, tacky on her gums. She bit down on a
pinecone; that was earlier. It crunched all the way into her jawbone. Her teeth ground and
the pinecone crunched, while her hand did what it had to with the steel wire.
The wind pushed at the branches of the trees.
The rust-brown needles fell.
There, on the ground.
It’s later now, she’s on her feet, she’s standing. The sea tussles with the sun behind
the horizon. There’s a distant crackle of red. Brooks clink, waterfalls whistle. She has to go,
down there. Hesitantly she teeters her pelvis forward. Tenses. One short, stupid moment
she’s afraid some of the steel wire has got stuck.
Marita is already in her church clothes. How far ahead, how cold-bloodedly, some
might say, she was thinking before she struck out into the darkness. The dress is nice, the
cut contemporary, taken from a Danish magazine. Marita sews her own clothes. Reads
patterns and comes up with sleeves, bodices, skirt widths by eye. For a long time she’s
dressed like someone meant for more than the factory by the harbour and an everyday in
fish. The smell of sour woollen socks in the village hall. Some of them down there think she
believes she’s too good for them. The same people also think she isn’t good enough. Marita
knows that. She’s fond of them now, in the way you’re fond of people you’re shortly going to
leave.