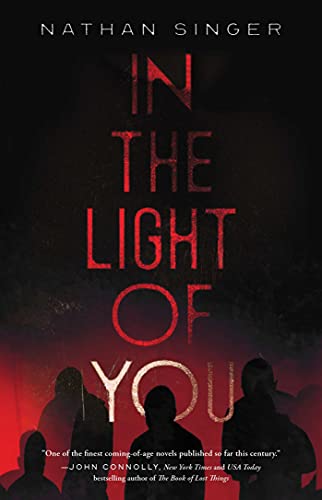 In the Light of You

“ One of the finest coming-of-age novels published so far this century” (John Connolly, New York Times bestselling author), In the Light of You is a timely and powerful story about the consequences of intolerance and the agonies of being young and disillusioned in a racially divided America. Angry, disaffected sixteen-year-old Mikal Fanon has just moved out of his poor Kentucky suburb to an even poorer Black neighborhood in Ohio. Feeling like an outsider in a world he perceives to be pitted against him, Mikal joins a gang of Neo-Nazi skinheads for reasons that are not entirely clear to him at first. The gang’s charismatic leader, Richard, takes him under his wing, and Mikal finds himself pulled into the wild, fast-paced, and dangerous lifestyle of the white power underground. Emboldened by his newfound sense of belonging, Mikal finds himself committing horrible acts of violence without a second thought. But two women threaten to tear his world apart—a passionate Black activist named Niani Shange to whom Mikal is secretly (and desperately) attracted and Sherry Nicolas, Richard’s new girlfriend, whose presence serves to further destabilize an already volatile situation. These two fundamentally opposite yet eerily similar forces threaten to throw fuel on an already raging fire, promising a bloody and explosive end. But who will survive, and who will be burned?