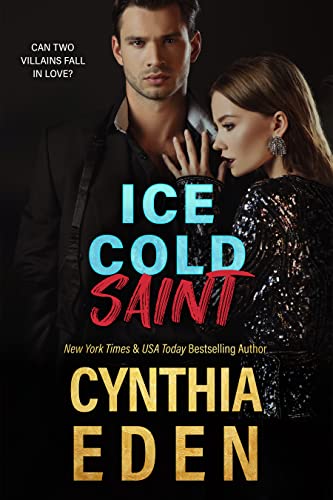 “You said that wrong. What you meant was that you’re here to fall in love with me.” - Alice

Saint is in the family business…the business of hunting killers and closing unsolved cases. He knows his reputation—most people think he is a monster. Dangerous, cold, deadly…and with no conscience. But it takes a guy like him to get the job done. And his latest job? Well, that job has him tracking down a suspected Black Widow…the beautiful and ever-so-seductive Alice Shephard. A woman who is linked to the disappearance of three men.

Beauty can be the coldest lie of all.

Whispers and scandal follow her every step, but Alice doesn’t seem to care. Is she responsible for the disappearances—and possible deaths—of three ex-lovers? Saint will find out. He’s stepping into her web, and if she’s guilty, he’ll personally lock her away, just as he has done on case after case before. Emotions never get in his way.

Wanting her isn’t a surprise. Needing her is.

Alice seems immune to his charm. Fair enough, mostly because Saint isn’t known for charm. But he is hell on wheels when it comes to seduction, and the attraction between him and Alice is electric. When he touches her, need rocks through him, a desire so fierce that it threatens to consume them both. But Saint can want her and still lock her away. No problem. Or…

Problem. What if she’s not guilty?

When Alice saves his life, Saint realizes there is more to her than meets the eye. Maybe she’s using him, maybe everything is a game to her, or maybe…maybe Alice is the real victim in the story and not the villain. Unlikely, but…what if? What if all along someone else was attacking from the dark? What if someone else is determined to claim Alice, to eliminate all other men from her life?

And what if Saint might just wind up losing the one person he needs above all others?

They call him Saint, but everyone knows he’s a monster…and he’s ready to let his dark side out to hunt.

Author’s Note: As part of the Ice Breakers, Saint is intent on solving cold cases. But his latest case heats up—or rather, goes molten—the instant he meets Alice. She’s supposed to be a villain. Fair enough, he’s not exactly hero material. Can two villains fall in love? Time to find out. These two don’t play nicely, they love hard and dirty, and they will take on the world for each other.
Read more

“She has to be stopped.”

Saint Black stared at the picture before him. A beautiful, smiling woman gazed back up at him. The smile on her full lips was taunting, sensual, and it never touched her eyes. Unusual eyes, a mix of topaz and brown—almost gold. Her gaze in the photo seemed oddly luminous as she peered back at him.

“I get that she doesn’t look like a killer,” the would-be client who paced in his office said, her breath catching. “That’s part of the problem. Or—or maybe it’s part of her appeal. I don’t know. Men fall at her feet. Always have. Men like my brother, Donovan. They fall for her, and then…”

Saint forced his gaze to lift. To lock on the lady who’d surged into his office five minutes ago, right before he’d been preparing to cut out for the night.

“Then she kills them,” she finished as she lifted her hand and swiped a tissue under her left eye.

Tracy Eldridge. That was her name. She’d been late for her appointment with him, and he’d been fairly certain she’d just be a no-show.

His fingers slid toward the picture she’d dropped on his desk moments before. “You haven’t told me who she is.”

“Alice Shephard.” The name came out like a curse. “I tried to warn Donovan that she was trouble. I knew it from the first moment I met her. But he wouldn’t listen. Now he’s gone, the others are gone, and she’s still out there. It’s only a matter of time until she strikes again.”

Curiosity trickled through him. Curiosity—always a dangerous thing. Because once he became curious about something…Saint’s gaze slid back to the photo. He frowned when he realized that his finger was sliding lightly over her smile.

What in the fuck?

He immediately stopped the odd movement.

“I want to hire you,” Tracy announced. “Money is no object for me. You have to catch her.”

Now they were getting down to business. “Did she jump bail? If there are warrants out for her—”

Tracy rushed toward his desk. She slapped her hands down on the surface. “No! No, there are no warrants, that’s the problem! They never arrest her! The cops fall under her spell just like everyone else, and they let her go.” Pain and rage shook the words even as tears glittered in her pale blue eyes. Her blond hair had been pulled back into a severe twist. “They let her go,” she repeated in a seething voice, “and no one will help me stop her.”

Tread carefully. “I’m a bounty hunter. If this Alice Shephard is not wanted for a crime, there really isn’t much I can do.”

Her lashes flickered. Her mascara had run, darkening the skin beneath her eyes. “I’m not trying to hire you in your bounty hunting capacity.”

Yes, he’d suspected as much. So he waited for her to continue.

Saint didn’t let his expression change. He never did. When it came to being stone-faced, he was a master. “What connections might those be?”

Her chin lifted. “Are you bored right now?” Then, before he could answer, she shoved her hand into her purse and yanked out a checkbook. Diamond rings glittered on her fingers, weighing them down. She snatched a pen from his desk. Scribbled an amount on the check and shoved it toward him. “Or…how about now?”

“I know. I’ve tried reaching out to the others. They were no use to me. They—they told me they would try to help when they had time.” She tore up the first check. Wrote another. “We are running out of time. I know she’ll kill again. She always kills again. Men fall for her. She lures them in, and then she kills them. Three dead

lovers. Soon, she’ll pick a fourth.” Tracy pushed another check toward him.

Saint straightened in his chair. “What is it—exactly—that you want me to do?” He knew people—quite a few of them actually, thanks to his bounty hunting work—who would literally kill for that much money.

He, however, wasn’t in the killing business.

But he did dabble in some crime solving. A man needed a hobby, didn’t he?

Once more, his gaze flickered back to the photo. Alice Shephard appeared to be a small woman, built along delicate lines. It was never easy for a woman to make a much larger individual vanish. At least, not without help.

“You always catch your bounties, and with the Ice Breakers, you don’t give up. I want that. I need that. Alice Shephard is a killer.” Her breath heaved in and out.

He made no move to take the check. His gaze lingered on Alice’s image.

Beauty can hide a monster.

“I know she did it!” A sharp crack in Tracy’s voice. “And if you won’t help me to prove it then—then I will just stop her myself!” Rage and stark desperation twisted in her words.

He took the photograph. Put it in his desk drawer. Slid the check into the drawer, too. “I’ll see what I can do.”

Tracy’s jaw dropped. “You—you—” Her eyes lit with what appeared to be feverish hope. “You’ll take my case?”

His mind had already started to assess the possibilities. “You’re describing a black widow.”

“A black widow. She chooses her mates, then she kills them.” He’d never had a black widow case. Should be interesting.

Again, curiosity stirred. Stronger this time. Curiosity had always been his weakness. Maybe because he spent so much time just feeling bored—or feeling fucking nothing—that when curiosity came along, he tended to get hooked.

“I haven’t done anything yet.” And he would make no promises. “I’m just going to dig around a little bit. See what I discover.” About the beautiful and potentially deadly Alice.

“I want her locked away.”

Too bad. We don’t always get what we want.

“I want her to lose everything that she cares about in this world,” Tracy continued passionately. “I want her to hurt just like I hurt. She thinks she’s gotten away with murder, but we’ll show her that she hasn’t.”

If Alice was guilty, then, yes, he would see her locked away. Jail was a real bitch. He should know. He’d spent too much time there himself.