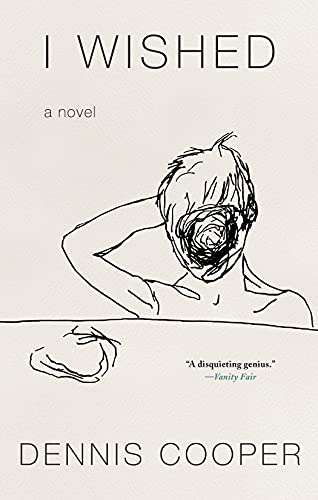 “I started writing books about and for my friend George Miles because whenever I would speak about him honestly like I am doing now I felt a complicated agony beneath my words that talking openly can't handle.”

For most of his life, Dennis Cooper believed the person he had loved the most and would always love above all others was George Miles. In his first novel in ten years, Dennis Cooper writes about George Miles, love, loss, addiction, suicide, and how fiction can capture these things, and how it fails to capture them. Candid and powerful, I Wished is a radical work of shifting forms. It includes appearances by Santa Claus, land artist James Turrell, sentient prairie dogs, John Wayne Gacy, Nick Drake, and George, the muse for Cooper's acclaimed novels Closer, Frisk, Try, Guide, and Period, collectively known as “The George Miles Cycle.” In revisiting the inspiration for the Cycle, Dennis has written a masterwork: the most raw, personal, and haunted book of his career.

I started writing books about and for my friend George Miles because whenever I would speak about him honestly like I am doing now I felt a complicated agony beneath my words that talking openly can’t handle.

There’s no one I can talk to, basically. Every friend I used to have who also knew him hasn’t sought me out in years, which would be easy since I’m very mildly famous, whereas their last names are so commonplace that, when I search the web for them, literally thousands of candidates show up.

I’ve talked about my friend in so many articles and interviews. If you do a search using his name, pages and pages will turn up, and every one that’s not about some far-flung namesake is either by me or about me, or it’s something made by someone who only knows the characters I’ve named for him.

How could someone like him die without a single friend or member of his family ever putting up a tribute page or even mentioning his name in tweets or Facebook posts, even on his birthday or on his death day’s anniversary or even randomly in reference to something in their lives or art that brought his memory to mind.

Why hasn’t anyone who knew him ever tried to contact me to say, “I knew him too,” or “Thank you for devoting so much writing to him,” or “How could you have written such disturbing things about my friend or brother or former boyfriend or son or cousin?” Is what I’ve done that obscure? I guess.

When George doesn’t cross my mind, which can happen for a while, weeks, months, I’m okay, but then I think of him and get like this. But not “like this” because I almost never talk about him, period. I’ll say a little, and people will say, “That’s interesting and sad.” But they mean for me and not for him.

Or I write about him, and my readers say, “That’s sick or awesome, or he’s so cute, or he’s too unsympathetic, or he’s very touching, or he’s boring, or he’s really sexy, or I knew someone like him too, or I relate to him so much,” which is the best or only meaningful response that I can even hope for. That’s as good as it will ever get for him.

I saw a therapist for three years, and I talked about him there, but she said he was a symbol in my lifelong playing out of shit my parents did to me, and she just wanted me to talk about my past, not him. I would ask her please, please forget about me and think of me as just some person who is telling you about him.

I know how difficult he was to be around, and how emotionally hot and cold, and I understand he did and said some awful things to people near the end when I wasn’t with him unforgivably, but could his death really have been such a big relief to everyone? Like, I never need to think about that guy again?

I had a friend who claims to be a psychic. She did a reading for me once and said she saw him hovering above my head or something. She said he’s always watching over me, feeling so much love and gratitude for something that I used to do for him or have been doing since he died, and I almost believed her, and maybe I even do. That’s how easy it is to hurt me.

Even now I think, What if her envisioning was true, because I want so unbelievably and inexpressibly for him to know he meant and means so much to me that I have written and still keep writing all these elegies and things, even when I’m not communicating anything beyond my need to talk about him, but why?

I guess because I want someone who knew my friend to read this book and find me. I want this book to be more public than my others so it will find people who don’t normally read novels or who don’t give a shit about some weird cult writer’s books because it seems like everyone who either knew him or used to know me doesn’t.

I want to know that all my love for him is worth it or find someone who’ll convince me he was no one much, or who’ll say, “He never mentioned you,” or that he referenced me offhandedly enough that it’s clear I didn’t mean that much to him, and that’s the hope, and that’s the fear, and I know that’s only semi-interesting to read, but it’s very hard for me to even do this.

George’s father is a failed Olympic gymnast who seems overly standoffish and dejected even for a Russian. He still looks teenaged in his early 30s except when he takes off his shirt, because there’s something too dog-eared about his muscles. George thinks he’d look exactly like his father if his father were a worm. He’s a 12-year-old nobody much who wishes he could play guitar and is watching an American cartoon. ...