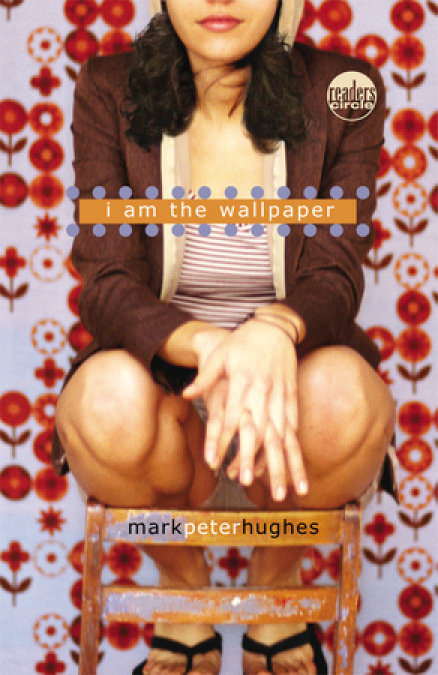 Thirteen-year-old Floey Packer feels like she's always blended in to the background. After all, she's the frumpy younger sister of the Fabulous Lillian. But when Lillian suddenly gets married and heads off on a monthlong honeymoon, Floey decides it's her time to shine.

Funny, honest, and surprisingly moving, I Am the Wallpaper introduces a remarkable new talent.


Finally, today I’m a teenager! I see the next year of my life waving me onward like Brad Pitt in a loincloth! Great things are about to happen. For example:
a. I will say goodbye to tech ed with Mr. Byrd. (Yay!)
b. I will say hello to eighth grade. (Hooray!)
c. Wendel will at long last admit that he likes me.*
d. Lillian will finally get a real job and move out of the house and I won’t have to share a bedroom anymore.**


*This morning I thought of a plan to help him over his shyness thing--sort of a birthday gift from my brain! If I ask Gary, I’m pretty sure he’ll give me a part-time job working with him and Wendel at the studio. Spending more time together ought to help the boy along. Sure, I’ll need to figure out what to say to Azra, but as long as it’s Wen who makes the move and not me, I haven’t broken our deal, right? (Note to self: Start working up an interest in photography.)
**This, of course, may just be wishful thinking, but it’s my birthday, so I can dream, can’t I? (Note to self: Start leaving the Help Wanted section of the newspaper on Lillian’s pillow.)


On top of all the other excitement of the day, I would also finally find out what was inside the mystery package from Aunt Sarah. A week before my birthday, it had arrived in the mail. That was kind of strange because I barely knew Aunt Sarah. Sure, I was aware that she lived in Chicago and that she was a teacher like my mom, but I hadn’t seen her since my dad died, and that was when I was two. My mom was almost as curious as I was.
“So, are you going to open it now, Floey?”
“I can’t,” I said. “It says, ‘Do not unwrap until March fifteenth.’ ”
So it sat on top of the television and I could only wonder what might be inside. It was kind of a fun mystery.
When my birthday finally came, Aunt Sarah’s package sat at my feet along with a handful of other gift-wrapped boxes, waiting for me to reach down and open them. Five eager pairs of eyes looked on. Next to Azra, my best friend, sat Wen. He looked especially lovable in his new rectangular black-framed glasses. He still looked geeky, but in an artsy, hip kind of way. It was easy to see why Azra and I both had crushes on him. Near my mother sat Gary, my mother’s tennis partner, and Frank Sinatra, my sister’s crotchety old ferret. The only person missing was my sister, Lillian, who was already an hour late, typical for her. In fact, we’d just decided to go on without her.
But just as I was reaching for Aunt Sarah’s package, Lillian showed up. Everyone turned to see her burst through the door with two complete strangers.
“Everybody, I’d like to introduce you to my new friends, Frida and Digger!” she said in her big, loud voice. “They’re from Sweden!”
Frida and Digger were tall, smiling blond girls in giant parkas. They looked about the same age as Lillian, twenty-one. Lillian explained that she’d met them on the bus coming back from Providence, where she’d been walking some rich lady’s dog.
She spoke slowly to the blonder of the two. “It is Digger, right?”
The other one, who must have been Frida, nodded. From the uncertain way the two girls looked at each other, I felt sure their English was shaky at best. Frida took out an unwrapped box of scented soaps. They’d obviously picked it out only moments earlier at the dollar store where the bus dropped them off.
“Happy birthday, Floey,” Frida said to Azra, enunciating every syllable carefully and handing the box to my friend instead of me.
“Come on in,” my mother said, sounding pleased that they were here to take over my birthday. “Let me take your coats. We were just getting started. Anybody want soda?”
That’s when everybody, including Azra and Wen, stood up to say hello to my sister and her new friends, leaving me alone in my chair, the gift-wrapped boxes still unopened.
This was classic Lillian. My sister always had to be the bride at every wedding and the corpse at every funeral. She didn’t care what she did to attract attention. Once, she climbed onto the roof of the town hall, saying she wouldn’t come down until they stopped destroying the rain forests. Another time, when the school was thinking about starting a dress code, she showed up for her classes in a bikini. She was loud and rowdy and fun and everybody loved her for it. Of course, she was also thin and pretty, with thick dark hair and a perfect little nose, so boys practically burst their glands trying to get her to notice them. She had about a zillion friends and all of them wanted to be just like her.
It was the Cult of Lillian.
Sometimes when my sister is around I feel almost invisible. I’m like the wallpaper, there but barely noticed. But this was especially frustrating because today was supposed to be my day, not hers.
Eventually, everyone settled back into the living room. Frida and Digger made themselves comfortable on the sofa between Azra and my mother while Lillian plopped down on the floor in front of Wen. Still, I was going to have to wait a little while longer to find out what was inside Aunt Sarah’s package because now Lillian was entertaining everybody.
“Baba ghanoush,” she said, dunking a celery stick into one of the dips my mother had laid out. “Don’t you just love to say that? It practically flops around in your mouth. Baba ghanoush. Baba ghanoush.”
Gary, whose comb-over looked particularly bizarre today (Ma said he was “losing” his hair, but as far as I could see he must have misplaced it long ago and there was no hope he’d ever find it again), sat back in the armchair and repeated it thoughtfully. “Baba ghanoush. Baba ghanoush.” Then he chuckled. “You know, when you’re right, you’re right. It’s a great word, Lil.”
Soon, everybody was doing it. “Baba ghanoush. Baba ghanoush.”
And nobody was paying any attention to me.
I am the wallpaper.