A propulsive and daring new novel by the author of Very Nice about a woman on the run from catastrophe, searching for love, home, a swimming pool, and for someone who can perhaps stop the bleeding from her head.

"Marcy Dermansky is one of the most wildly original writers that I've ever read, and Hurricane Girl showcases what makes her so amazing. In tracking the unpredictable movements of a strange and hypnotic journey in the aftermath of a natural disaster, Dermansky nails the sensation of being alive, of navigating a world so strange that it’s almost a dream, of trying, again and again, to anchor yourself to a moment, to assure yourself that you exist, to withstand anything and somehow keep living." —Kevin Wilson, author of Nothing to See Here

Allison Brody is thirty-two and newly arrived on the East Coast after just managing to flee her movie producer boyfriend. She has some money, saved up from years of writing and waitressing, and so she spends it, buying a small house on the beach. But then a Category 3 hurricane makes landfall and scatters her home up and down the shore, leaving Allison adrift.

Should she go home from the bar with the strange cameraman and stay in his guest room? Is that a glass vase he smashed on her skull? Can she wipe the blood from her eyes, get in her car, and drive to her mother’s? Does she really love the brain surgeon who saved her, or is she just using him for his swimming pool? And is it possible to ever truly heal without seeking some measure of revenge?

A gripping, provocative novel that walks a knife’s edge between comedy and horror, Hurricane Girl is the work of a singular talent, a novelist unafraid to explore the intersection of love, sex, violence, and freedom—while celebrating the true joy that can be found in a great swim and a good turkey sandwich. 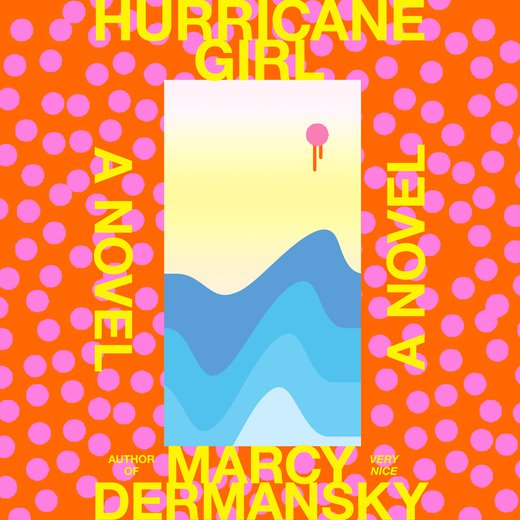 Allison had lived in her beach house for a week and a half when the hurricane warning came. Category Five. Orders to evacuate.

She spent a night in a motel.

She drank gin and tonics, her father’s favorite drink, and watched the local news in her motel room.

Whereas Allison had bought the house. It would be okay. That was what she told herself.

And, in the end, in fact, the storm was reduced to Category Three and had turned north. Allison felt grateful to be spared. She got up, only slightly hungover, bought a coffee, and drove back to her house. Which was gone. She did find it, but in pieces strewn all over the yard. Wood beams and siding everywhere. The toilet, from the second floor, was upright in the same place, on the ground. The red couch was precisely where it had been, in the living room that no longer existed. The roof lay in the middle of the road. Strangely, the steps up to the now-absent porch were still intact.

When Allison first heard about the storm, she imagined she would weather it. But then the winds picked up and she realized she was afraid.

Her neighbor next door had nailed boards across his windows. Allison thought about asking him to help her. Allison also did not want help from men. She also did not like the look of her neighbor. He wore a baseball cap and had large muscles, wore sleeveless T-shirts that said USA.

“Bye, house,” Allison said as she sank down on the front steps, clutching her cup of Dunkin’ Donuts coffee. That was all she could find that morning on the drive from the motel. “I loved you.”

Allison was not sure what to do.

She thought about sitting on the front steps, but probably that was not safe. She had spent so many good hours on the porch, imagining her future.

The house was insured, at least.

She was not a complete idiot.

“You are an idiot,” Allison said out loud with a sigh.

Allison had a tendency to be unkind to herself.

In this case, it seemed warranted.

Her mother, always a worrier, had advised her against the move. Her friend Lori had also been against it. “You won’t like it there,” Lori had said. “The beach might be good, sure, but think about hurricane season. Republicans. White supremacists.”

Allison had claimed not to be scared of such things.

“Well then you are an idiot,” Lori had said.

Allison often wished that she had a best friend who was nicer to her. Often, it felt like not enough people were nice to her. Her next boyfriend, if nothing else, would be nice.

Allison stretched her arms out to the sky.

She was incredibly stiff, as if all of the tension of the day before was somehow stored in her body. She walked around the foundation of her house, taking pictures with her cell phone. There was one of her sneakers, blown on top of the neighbor’s hedge. The hedges were still perfect. The neighbor’s house did not look damaged. It was a brick house. Sturdy.

Allison’s house, clearly, had not been particularly sturdy.

She had forgone any inspection. She had had to act fast. It was an auction, no time to be careful. Allison had worried, driving cross-country, that there would not even be a house, that she had participated in an elaborate Internet scam.

So the whole thing had not been a complete loss.

Allison’s phone rang, but she did not answer it. It was her mother. The kind thing to do, of course, would have been to answer it. Allison had not even listened to the messages that had started coming in once the hurricane began.

She did not think that her mother would actually say I told you so, but somehow her not saying so would not take away the sting. Her mother had told her so.

Allison was homeless and she was broke.

It was wild how fast the tides could turn.

Part of her also knew that she was fine.

She would make more money. Find a more appropriate home. Allison could write another script. She could even go back to her movie producer boyfriend. She could go back to his beautiful house and swim in his beautiful pool. He had not wanted her to leave. She could get back into her car and do the trip in reverse, make time move backward. She could wait for her insurance money to come in.

Allison stared at the red couch. She had bought it new at IKEA. She had not even hung any art on the walls.

This was not so bad.

Even if it felt that bad.

And it did feel that bad.

In her week and a half in the house, Allison had not met anyone. Had barely had a conversation. She had gone swimming every day, jumping waves, floating on her back. She had taken long walks on the beach. She had watched rabbits run from the bushes at the edge of her yard and then take cover. She had eaten turkey sandwiches for lunch and then sometimes turkey sandwiches for dinner.

Until the day of the hurricane, the weather had been perfect. Allison had an idea for a new screenplay, a TV show maybe, but she did not try to write it. She knew that when the time came, it would be there, waiting for her, inside her very good brain. She had time.

Somehow, she felt busy. Swimming every day. Taking walks. She would have time to write. She could wait for the rain, she told herself.

She had not considered that it would rain as hard as it did.

It did not seem fair that the houses on either side of Allison’s were still standing. It made Allison think of the Three Little Pigs. She, of course, had gotten the house made of sticks. The neighbor in the baseball cap pulled into the driveway of the brick house next door.

“Tough luck,” he called out to her, getting out of the car.

“Let me know if you want to sell the land. I’d be happy to take it off your hands.”

So much for one moment of sympathy.

He handed her a business card.

“It would be foolhardy to rebuild, don’t you think? I can pay you a good price.”

Allison looked at the card. Jim Smith. That was really his name. She had the urge to ask him how he spelled it.

“I was supposed to buy it, but the realtor was a cunt.”

Allison squinted at him. Jim Smith.

“She said she was going to email me the paperwork and then sold the property out from under me.”

Allison could hear a voice in her head: her father, telling her to make a deal. Ask for more than it’s worth. She could ask for a lot. She could seek out that same realtor, the one who clearly loathed him. Jim Smith. Allison was glad, at least, that he would no longer be her neighbor.

Allison shrugged. “This just happened,” she said. “I don’t know what I am going to do.”

“Just think about it,” her neighbor said. “And make sure you clean up this mess,” he said. “It’s an eyesore.”

Allison said nothing. She watched Jim Smith head inside his house, close the front door.

Allison squeezed her eyes shut. She wanted her house back.

Anyway, it was not a complete disaster.

Allison had saved her clothes. Her laptop computer. Her cell phone. Her expensive facial lotion. A favorite coffee mug she had bought more than ten years ago, taken with her from one home to the next. It was white, with a green fish painted on it. There were yellow strips above and below the fins. It was a random design. Allison loved this mug.

She had barely furnished the house. She had been planning on taking her time. She did not need, for instance, a kitchen table. She ate her turkey sandwiches sitting on her front porch. She had bought a couch. And look what had happened to that.