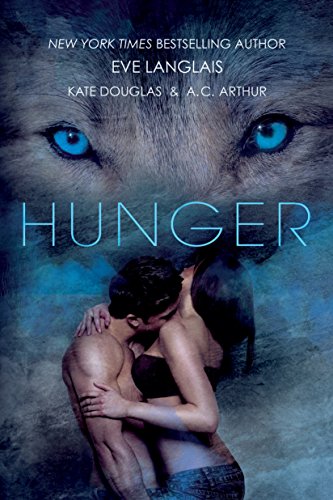 In The Alpha’s Mate, villains aren’t supposed to rescue damsels, and pack alphas are known to have complete control of their wolf. But when Fabian saves a certain lady from drowning, everything he knows gets tossed away and only one thing becomes clear: she’s his mate—and someone wants to kill her. Hell no. Protecting her, though, is only part of his problem. He also has to convince her she belongs to him. In her words, “Hell no.”

When she flees, little does she realize this wolf loves to chase. And when he catches the woman he wants? She’ll become the Alpha’s Mate.

Previously published in the 2-in-1 e-original Claimed by the Mate Volume 3 and in print for the first time!

In Dangerous Passions, finding a mate shouldn’t be all that difficult for a sexy werewolf on the prowl. Modern women want romance and seduction, and Feral Passions Resort has served that purpose for providing both for the men of the Trinity Alps pack. Only two are still unmated—alpha leader Traker Jakes and his lieutenant Evan Dark—but danger stalks the women they’ve chosen. Danger that threatens everyone in the pack at Feral Passions.

In Bound to the Wolf, Marena Panos is an attorney with a dark secret that follows her into the mountains and into the bed of a Phelan Sava, a lycan whose strength and shared penchant for pleasure/pain will eventually own her body and soul.


The fresh air presented a nice change after the time she’d spent getting bounced around in the confining, and somewhat stifling, trunk of the car. However, getting to vacate her vehicular coffin didn’t mean her situation improved, as she found herself heaved over a shoulder with less care than a sack of potatoes. How rude, but then again, she really couldn’t expect much manners given she was in the midst of a kidnapping, her own, to be exact.

Certainly not how I planned to spend my evening. But more exciting than the catching up on the DVR programming she had planned.

One tall lamppost lit the surroundings, but this was the only sign of civilization. The sounds of the city didn’t penetrate the gravel-packed parking lot. Night had fallen, and the hum of crickets from the shadowy forest filled the air as opposed to the buzz of flies in dirty alleys. A city girl at heart, she didn’t often find herself in such lush green places and, given the mosquito that buzzed looking for a spot to land, with good reason.

Logical deduction put her in some kind of conservation area, a guess she made because of the glimpse she got of a placard reading: PLEASE STICK TO THE MARKED TRAILS. And KEEP OUR PARKLANDS CLEAN. DON’T LITTER.

Does dumping bodies count? She idly wondered what kind of fine that would entail.

The jouncing journey on her kidnapper’s shoulder proved short, her landing abrupt, the splintered, weathered wood planks she hit not providing the most cushiony of landings.

“Would it hurt you to be gentle?” she grumbled.

She took that to mean yes, it would.

“Should we kill her now?” a gruff voice asked.

She frowned. That seemed kind of drastic, especially given she didn’t even know these thugs, although they’d certainly targeted her. They’d lain in wait in the parking garage of the building where she worked. Like an idiot, she never even sensed them until they’d conked her on the head.

“How should we kill her? I’m not too keen on getting blood on these shoes. I just broke them in.” The shoes in question were some type of patent leather. Not a great loss if he tossed them.

Thug Number Two replied, “We could strangle her, but I’ve heard them forensic folk can sometimes lift prints.”

“So use gloves.” Said with a duh-like sigh that she wanted to echo.

“Did you bring some?”

Judging by the silence, her kidnappers came ill prepared. Just her luck she’d gotten nabbed by incompetents. That boded well, for her at least.

“Fuck the gloves and killing her by hand. The river will take care of her for us.”

Death by drowning? Uh no. This conversation about ways to bring about her demise needed to end. She cleared her throat. “Excuse me…” Asshats? No, too aggressive. Gentlemen? Ha, say that with a straight face. “Guys, you really don’t want to do this.”

“A hundred Gs says we do,” retorted the one who advocated drowning.

A hundred grand? Damn, for that money she’d want to kill herself, too. “Who’s paying?”

“The guy who wants you dead.”

Well, that wasn’t the answer she hoped for. A name would have been nice since the list of people who disliked her was rather extensive. “Murder for money. Is that really something you want on your conscience?”

“Murder?” The one who had carried her snorted. “How is it murder if you fall in the river and drown? I hear this stretch has a pretty decent current. Not our fault if you can’t swim.”

As if she could swim given the way they had her bound. Not only were her hands tied in front of her, but her feet were tethered as well. Overkill if you asked her and not exactly an ideal scenario. It probably explained why her heart pounded, putting rumors to rest by those who said she had none.

“That’s not very sporting. I mean the least you could do is untie me.” She batted her lashes, but they didn’t fall for it.

“Untie you? Not a chance. I am not risking our payment just in case you actually manage to get out of this alive.”

“Maybe we should kill her before we dump the body in the water,” the other one whined. “What if she doesn’t drown?”

This discussion of her demise was really getting old. “Listen, gentlemen,” she said, even if, to her mind, they were little better than petty thugs, “perhaps we can negotiate. If it’s money you want then—”

The open-handed cuff snapped her head. She bit her lip, hard enough to taste blood.

Instead of making her cower or zip her lips, it annoyed her. “Well, that wasn’t very nice,” she retorted.

“Like we give a damn,” snarled the guy closest to her.

“Who are you?” Tell me your name so I know upon whom to exact my revenge.

“As if we’re going to tell,” Jerk Number Two said from behind her. She really should put a face to the voice for when she managed to escape and needed to find him again. She craned for a peek, only to receive another slap to her noggin.

Her head throbbed, and a hint of fear tried to weave its way around her confidence, attempting to strangle it.

Never. Giving up would cost her life. Since she didn’t have it scheduled in her agenda, death would have to wait. She had too many appointments to keep, too much still to experience.

“Didn’t your mother ever teach you to not hit girls?” she muttered.

“Yeah, and then our father told her to shut up with his fist.” The pair of thugs snorted at their poor jest, entirely too pleased with themselves.

Since she couldn’t seem to dissuade them, she tried to stall and gather other info as her fingers worked at the duct tape keeping her hands bound. Damn them for buying the good stuff. “Who hired you?” A hundred Gs wasn’t chump change, but it was also kind of an insult. Surely my death is worth more.

And what was the ultimate plan? Why kill her here, in this spot? Which was where exactly?

A glance around showed her seated on some kind of weathered wooden dock that jutted out over a span of water where the occasional whitecap glinted as the current rolled past.

“You talk way too much,” grumbled the hired killer.

“I told you we should have taped her mouth, too. But oh no, you said we had to keep her breathing until we got here because dead bodies stink up the car.”

“You’ll regret this,” she threatened.

“Yada. Yada. Say hello to the underworld. I hear it’s warm this time of the year.”

A snort of laughter accompanied the rough hands that gripped her arms, and despite herself, fear swamped her confidence. She couldn’t help but struggle, squirming and twisting in their grasp. She used everything she had, even her teeth, managing a satisfying chomp.

“Ow! The bitch bit me,” complained the thug who dropped her.

A minor victory, and she used it to inchworm her way across the dock, not very far, though.

A booted foot made contact with her poor head, and she gasped in pain, then struggled for consciousness as dark spots made her blink.

The cold slap of the water stole her breath, and she sank, much like a rock. No amount of wiggling or thrashing stopped her descent. It didn’t take long before her lungs burned, the pressure of holding her breath urgent.

She breathed out a few bubbles. It didn’t change her situation. It just meant she lived a few seconds longer.

Apparently, fate didn’t want her to pollute the river either, because something caught hold of her.

She caught only a glimpse of his features, the scant starlight providing more shadow than illumination. Yet who cared about his looks? He’d saved her!

Their heads broke the surface of the water, and she drew in a much-needed lungful of air. As she fed her abused lungs, she caught a glimpse of her rescuer. Perhaps he was a merman. He certainly appeared as if he belonged to the water elements with his hair slicked back. However, his eyes, vivid even in the darkness, were lit as if from within with a golden fire that screamed, I am not human!

But he certainly was attractive. He held her with a dependable strength as he trod water for both of them. A savior from the shadows.

She couldn’t help but whisper, “Who are you?” And then her brow creased as her mind hit a wall, a wall she could have sworn hadn’t existed before, and she exclaimed, “Who am I?”

However, her identity issues would have to wait, because it seemed the splashes of water all around them weren’t rocks falling from the sky. They were bullets.

Someone is shooting at us!