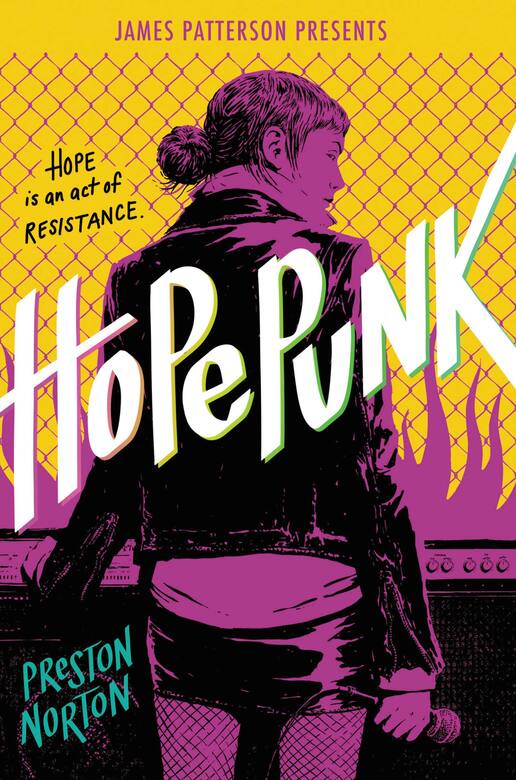 A heartfelt and funny new novel about forgiveness and redemption, and about how hope is the ultimate act of rebellion, perfect for fans of John Green and Becky Albertalli.

Growing up in a conservative Christian household isn’t easy for rock-obsessed Hope Cassidy. She's spent her whole life being told that the devil speaks through Led Zeppelin, but it’s even worse for her sister, Faith, who feels like she can’t be honest about dating the record shop cashier, Mavis. That is, until their youngest sister hears word of their "sinful" utopia and outs Faith to their parents. Now there’s nowhere for Faith to go but the Change Through Grace conversion center…or running away.

Following Faith’s disappearance, their family is suddenly broken. Hope feels a need to rebel. She gets a tattoo and tries singing through the hurt with her Janis Joplin-style voice. But when her long-time crush Danny comes out and is subsequently kicked out of his house, Hope can’t stand by and let history repeat itself. Now living in Faith’s room, Danny and Hope strike up a friendship...and a band. And their music just might be the answer to dethroning Alt-Rite, Danny’s twin brother's new hate-fueled band.

With a hilarious voice and an open heart, Hopepunk is a novel about forgiveness, redemption, and finding your home, and about how hope is the ultimate act of rebellion.

THE GRAFFITI WALL HAD EXISTED FOR AS LONG as human thought. Or at least as far back as Mom and Dad had attended Sundance High. It had clearly been expanded upon in the two decades since. The thought was, if we let kids deface one wall as much as they want, they’ll leave the rest of SHS property alone. There were, of course, certain prohibitions—no swears,

no genitalia, no blasphemy (it was anyone’s guess what a “blasphemy” looked like)—but otherwise, free game. And it worked! I mean, there was the occasional “867-5309 call for a good time” carved on the inside of a bathroom stall, but even those were relatively clean, content-wise.

Maybe it was just me, but I thought the graffiti wall was high art.

It was a mosaic of identity, generations on top of generations. Images and colors and emotions splashed together into a psychedelic, face-melting kaleidoscope. Words like “DOOM” and “EUPHORIA” filled incredible amounts of space, painted like monuments. Phrases like “Be Someone” and “Don’t Wait” offered simple advice that had probably affected countless souls. There were images of staggering tree silhouettes with sprawling roots that wove into an invisible Earth. Black cats slinking by. Birds soaring. An impressive Chinese dragon, red with gold spines and whiskers, winding in and around the graffiti wall like a ribbon, tying the whole thing together.

At the very bottom corner, scribbled in thick black Sharpie, practically faded, someone had written “Faith was here.” It read like a metaphor. The power of past tense. Faith was here but no longer.

Unfortunately, Faith, in this case, was a very real person.

I was there when she wrote it.

I had joked about how tacky it looked next to everyone else’s art. I wasn’t trying to be mean. I was just joking.

Faith had shrugged sheepishly and said, “Yeah, but my existence is all I have to offer.”

Looking back, now that she has left, these are the words that haunt me most.

What a cruel way for the universe to show me how much her existence meant.

I was born full of swear words.

This was what I told people when they asked me when it was, exactly, that I started swearing like a character in South Park. They always seemed curious, considering I was born into the most blisteringly Christian family this side of the Black Hills. I certainly didn’t start verbally swearing until maybe a month before my sixteenth birthday. But as far as my inner monologue was concerned, I felt like I was nothing but swear words. Swear words and this vast, consuming emptiness devouring me from the inside. I heard the word “fuck” once, and suddenly, it was the only word in the English language that made any sense. I held on to it like a life preserver in the middle of an endless ocean.

I’m not saying there was anything inherently meaningful about the f-word. But sometimes, in a world that I completely failed to understand, it felt like the only word that understood me. All I really knew was that the God I had been taught to believe in since I was little had a real fucked-up way of doing things, and I wasn’t sure I believed in that Holy Shithead anymore. And once you’ve allowed yourself to pull that spiritual rug out from beneath your feet, all equilibrium goes out the window. I was left reeling for balance in a world that didn’t seem to make sense anymore.

Anyway, I’m getting ahead of myself. Let me tell you about Faith.

When I say “coolest,” I mean that in a more genuine, intimate sense of the word. Faith was a nerd and a total introvert weirdo. By some fake fashion magazine standard, she was like the exact opposite of cool. Outside of one-on-one conversations, she wasn’t eloquent, she wasn’t TV-definition attractive, and her sense of style didn’t extend beyond understanding the difference between shirts and pants. But she was gleefully, recklessly, 100 percent herself, and if that isn’t cool, then fuck. I don’t know what is.

Faith’s one true love was science fiction. She gobbled up all the subgenres—hard sci-fi, soft sci-fi, apocalyptic, postapocalyptic, space opera, space western, dystopia, alien invasion, dying Earth, Afrofuturism, steampunk, biopunk, nanopunk (there were seriously way too many “punks”)—but her favorite was the granddaddy of the “punk” subgenres: cyberpunk. From books (Neuromancer, Snow Crash), to movies (Blade Runner, The Matrix) to anime and manga (Akira, Ghost in the Shell, Battle Angel Alita), she was hardcore for this shit. And that was just the classics. She had plenty of room for modern Netflix mindfucks like Black Mirror or Altered Carbon. She loved stories with artificial intelligence, virtual realities, hackers, and megacorporations, juxtaposed against a radical change in the social order. When I tried to pry into her obsession, she explained that at their core these stories were about one person making a monumental difference. At their beating heart, these stories were about what it meant to be human.

For as long as I can remember, our family used to go to this megachurch (Faith liked to call it “MAGAchurch”—not a compliment) in Gillette, the next big city from our town. We were there every single Sunday. It was called Traditional Family of Christ, and it looked like a sports stadium and a rock concert got baptized, married, and had good, old-fashioned marital sex. At the time, I didn’t even realize how problematic the title was. But Faith would always nudge me in the side and whisper her commentary into my ear. Like when Pastor Raines instructed his congregation of thousands, filled to the rafters, to not do anything without first consulting the Lord in prayer.

Because God forbid we learn to make rational, independent choices for ourselves,” said Faith.

“It’s a good thing the world is so black and white,” said Faith. “Can you imagine if there was a gray area? We’d be screwed!”

Or when Pastor Brighton said that the Bible is the inerrant, infallible word of God. It is flawless and incapable of error.

“Like when those kids call Elisha ‘bald head,’ so he curses them, and two bears come out of the woods and eat the little bastards—Second Kings, Two Twenty-Three?” (This was tragically and hilariously her favorite scripture and probably the only one she could cite off the top of her head.) “Like, screw those kids! Male pattern baldness is serious.”

If you’re wondering how I kept a straight face through all of this, I didn’t. It almost always resulted in me snorting, barely stifling my laughter, and—when assailed by homicidal looks from both parents—pretending I was just so totally moved by the word of God, praise him. *wipes away rapture-filled tear*

When Pastor Raines went on an incredible rant about the “eternal nature” of gender, and homosexuality being a “direct attack” on the family unit—that anything outside of this was

unnatural and wrong—I expected her to have an entire comedy skit. These guys didn’t get to go on crazy rants like this without some tasty riffing from Faith.

It wasn’t until later that evening that Faith knocked on my bedroom door and peeked inside.

Faith nodded her head. Then shook her head.

Faith stepped inside and shut the door behind her. “Can I tell you something?”

“You can tell me anything.” I thought this was a given, but I scooted across the bed, tucked my legs in, and patted the open space in front of me. I even moved my favorite stuffed animal, Loafy—who was technically a plush loaf of bread with a smiley-winky face—and placed him in my lap, at attention. When we were in elementary school, Faith once told me that she watched the movie Flashdance at a friend’s house, and Loafy and I had kept that secret thus far, and we intended to keep it to the grave.

Faith sat on the edge of my bed, her hands balled tightly in her lap. She was staring at my wall. She couldn’t even look at me.

She was fifteen when she told me this. I was thirteen. What you have to understand is that we were essentially the Flanders family from The Simpsons. I had never met a real-life lesbian—at least not one who was publicly out—and the only famous queer woman I was consciously aware of was Kristen Stewart.

So I wasn’t deliberately being an ass when I said, “What, like Kristen Stewart?”

Faith paused to consider this. “I think she’s bisexual? But yeah, I guess?”

“Whoa, hey,” I said, panicking. I dropped Loafy, scooched forward on the bed, and hugged her. “Hey, hey, hey. I love you, okay? Thank you for telling me that.”

“You’re not going to tell everyone, are you?”

“Do you want me to tell everyone?” I asked.

Faith shook her head violently. “No. Not yet. I think Mom would murder me.”

I wanted to tell her that Mom wouldn’t murder her, but honestly, in my thirteen-year-old brain, I wasn’t entirely sure that was accurate. So instead, I just hugged her tighter. “Your secret is safe with me. Safe as Flashdance.”

Faith started crying even harder. When she finally hugged me, I thought I might snap in half. She hugged me like I was the only thing in the world she had to hold on to. Now that I think about it, I probably was.

I don’t remember that hug ever ending. That memory was pure hug. Pure love.

Faith and I were already close, but from that moment on, we were unbreakable. Our relationship was one of intimate understanding, sacred trust, and fierce loyalty. Because I knew about her sexuality, I felt the need to tell her my deepest, darkest secrets—which were honestly about as deep and dark as an Oprah Cinnamon Chai Frappuccino with extra whipped cream. They consisted mostly of the fact that I was developing a deep, abiding, possibly sexual love for punk rock.

I was also in love with a boy, but someone else was in on that secret.