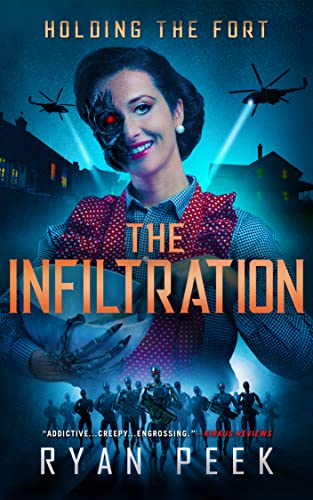 "There's no shortage of excitement and thrills in the Holding the Fort series, and Ryan Peek writes with a blend of tension and humor that I love. The plot never flags, and the characters are authentic and compelling. Ethan Tate and his friends -- and enemies -- are sure to please readers of all ages." — Michael Koryta, New York Times bestselling author


In the Top-Secret town of Blackwoods, Wyoming, a group of young teens desperately tries to warn military authorities about a mysterious ‘Fatal Error’ that will enable a malicious artificial intelligence to take over the world. Ethan Tate and his Team Blackwoods squad have had to save the world before—though they were the only ones to know about it—and they’re hoping they don’t have to do it again.

But when the military gets their warning, they put the town on lockdown, and then life at Blackwoods begins to get truly bizarre. The adults in the town start acting very strangely. Have the machines been unleashed upon the town once again, though this time in a most insidious and all-too-personal way? Could all the kids’ parents possibly be robotic replicates?

Ethan and his team, along with a most unlikely ally, must find a way to turn back this latest existential threat to humanity…and survive some really awkward family time in the process.
Read more

Ethan entered Judy’s Diner a few minutes before two o’clock. The lunch crowd was long gone, and the dinner crowd wouldn’t be due for several hours. He had picked that time for a reason. What he needed to talk about with the rest of Team Blackwoods demanded absolute secrecy.

Ethan took a seat in the far corner of the restaurant and waited. Soon enough, Annika, Caleb, Austin, and Glenn arrived and made their way to the table in the back. Everyone sat down and huddled up. They had just saved Blackwoods, and maybe the entire world, but they somehow felt like outlaws. The things they knew were so Top-Secret, if anyone found out, nothing would ever be the same. Their eyes darted around the room anxiously, looking for anyone, paranoid that someone might overhear them.

“We’re alone,” Ethan said, trying to reassure the group, and himself.

Just then, seemingly out of nowhere, Judy swooped in carrying a tray of ice waters. Everyone flinched in surprise. She began dishing out the glasses of water quickly, like a poker dealer tossing cards. “Sorry to sneak up on you,” she said. “You got my undivided attention. You guys are my only table.”

“No, no…We weren’t s-s-surprised,” Caleb said with a nervous stutter.

“You guys must’ve won your game. Congratulations. Five Cherry Cokes it is.” Then Judy paused and took a closer look at each member of the group. “Hmm…Now you guys don’t normally play together, do you?” she asked with an eyebrow raised curiously.

There was no way in the world Judy could’ve possibly known about the circumstances that’d brought their team together, but, as anxious as they were now, her tone seemed strangely accusing. It was enough to put them on edge.

“Right. This is a new team,” Ethan admitted quickly.

then put his arms around Glenn and Austin next to him and squeezed them in a hug.

“Well, change is good,” Judy said. “Not fair for the others, though…No team’s ever gonna beat the five of you,” she said with a smile.

“Thanks,” Ethan said, returning her smile. Then his smile evaporated and a more serious look overcame him. “We can’t afford to ever lose again.”

Judy winked playfully. “With soldiers like you guys around, I feel safer already. Be back with those Cherry Cokes.”

Ethan and the others exchanged awkward glances, feeling the irony of the moment. Judy soon came back with the carbonated refreshments. She plopped them down in front of the group.

“You folks wanna run a tab?”

Just then, a group of Air Force captains in full uniform entered the diner and made their way to a table beside them. One of them caught Ethan’s eye and nodded at him. Ethan nodded back politely, but let out a frustrated sigh as soon it was safe to do so.

“Great,” Ethan said, then turned to the group. “Feel like video games?” he asked while pointing with his eyes to the captains at the adjacent table.

Ethan and the group took their drinks to the back room of the diner that served as a video arcade. The peppy noises of video games in demonstration mode filled the air. They sat at the only table in the room. Finally, they were alone.

“It’s June fourth.” Glenn checked his wristwatch. “We have eight days, three hours, and about forty-five minutes before the fatal error…whatever that is.”

“No, we have to figure out what the fatal error is first,” Caleb said. “If we warn them now, what good will that do? They don’t know what their error is because it hasn’t happened yet.”

“Yeah, they could make the error all over again,” Austin said. “Only this time it’d be worse. They’d keep us out of the loop. Treat us like kids. Shut down that access elevator to the research facility. They’d give us no chance to ever execute Project Mulligan again.”

“So, we don’t warn them?” Annika asked, annoyed.

“Of course we warn them,” Ethan said, reassuring Annika. “But it would help if we knew a few things about what we’re up against first, just in case.”

“Yeah, but how?” Annika asked.

“That Skulley in the fort,” Caleb said with an eager smile.

“No, no, no,” Annika raised her voice. “Playing God with that awful machine can’t be our first choice. You’d be more likely to speed up the fatal error.”

“I could figure it out,” Caleb said. “I wouldn’t do anything until I was sure.”

“Really? How could you possibly be sure about technology from another planet?”

“Computers are computers…And I can figure out computers.”

“So help me, Caleb, I will call the base myself and tell them everything if you go anywhere near that Skulley,” Annika snapped. “There’s gotta be a better way.”

“There is a better way,” Ethan said.

Ethan took a deep breath and paused for a moment. “We don’t have a basement in our house, at least we’re not supposed to…yet I found a keypad under the thermostat, just like the one in your house, the one that gets you into your sub-basement.”

“Seriously?” Caleb asked in awe. “But I guess that makes sense now, since your dad is a chief engineer like mine.” He paused in thought. “So how does that help us?”

“Your dad told you about his sub-basement office, even gave you the password. My dad didn’t…never even told me his real job at the base.”

“Yeah, but how does that help us now?” Glenn asked.

“Because I know he’s gotta be hiding some pretty important stuff down there.”

Caleb cracked a mischievous smile. “Are you thinking what I’m thinking?”

“Hey, take a look,” Glenn whispered, nodding at the entrance to the arcade room.

It was Zeke and Jeremiah. The brothers nodded, smiled, and uttered a casual, “What’s up, guys?” to the group as they walked past them and made their way to their favorite arcade game.

Everyone stared at the Mitchell brothers in stunned silence. It was a very strange experience for Ethan and the others to be watching them. The brothers were alive thanks to the efforts of the group, but they would never know that. Not that anyone especially craved the credit, but it sure made them feel more isolated from the rest of the town. They desperately wanted to tell Zeke and Jeremiah what had happened, though they knew they couldn’t. Crazy as their story was, the Mitchell brothers would inform their brigadier general father, if for nothing else but a good laugh. But General Mitchell wouldn’t find it funny, and security would be tightened before Ethan and the others could even figure out their next move.

There was no way they could tell them, or anybody, anything. That group of five, it seemed, would be the only ones in the world to know the amazing and frightening truth. It was a lonely feeling. And the video game the Mitchell brothers had decided to play certainly didn’t help matters. It was a stand-up shooting game, where two guns are mounted on a platform facing a video screen. The enemy they were fighting…robots. The irony almost made them sick.

The Mitchell brothers’ taut biceps flexed in their T-shirts as they fired their machine guns at the screen, destroying hordes of oncoming robots. “Get ’em, Zeke!” Jeremiah yelled. “Get the ones on the right!”

“I am!” Zeke shouted back. “You just take care of that left side!”

The blaring sounds of gunfire from the video game filled the room. It also filled the group’s stomachs with an intense uneasiness. It was a visceral reaction to the sounds of combat that soldiers returning home from war experience. It was post-traumatic stress. Everyone’s hands were sweaty, and their throats were tightly worked into knots.

“They’re coming, they’re coming!” Zeke shouted with such intensity it was like he was actually trapped inside the video game. “I’m going down!” he said, firing his weapon madly.

“Me too!” Jeremiah yelled back. “There’s too many of them!”

Annika couldn’t take the tension any longer. She dealt with the mounting stress the best way she knew how: She jumped up from the table and dashed over to the video game.

“Just get out of the way!” Annika shouted in frustration as she nudged Zeke aside and grabbed his gun. “Ethan, get over here!”

Ethan hustled over to the game. “Sorry,” he said to Jeremiah before taking his gun.

The Mitchell brothers were stunned and could only watch as Ethan and Annika began blasting away at the machines on the screen.

“You just let him take your gun?” Zeke asked Jeremiah in surprise.

“Well, you just let her take yours,” Jeremiah snapped back.

The Mitchell brothers’ eyes slowly widened in astonishment as they witnessed Ethan and Annika’s incredible performance. Animated robots were being blown to bits before they could even get close to them. The scout and the sniper’s tactics looked choreographed and expertly planned, though neither spoke a word

to the other. It was as if they were reading each other’s minds. A perfect combat unit, the deadliest of duos.

“Better than we were,” Jeremiah laughed.

“The trick is to spot them from long distance, pick them off before they get too close,” Annika said. “Look for the light shining off their metal heads, gives ’em away…find those red eyes and put a laser right between them.”

The Mitchell brothers looked confused. “But those robots’ eyes are blue,” Zeke said. “And you’re not shooting a laser gun.”

After a few more seconds of intense fighting, an automated voice in the video game made the announcement: “Level Cleared.” Ethan and Annika stepped back from the video game and high-fived each other. Then they gave the controls back to Jeremiah and Zeke.

“You two were amazing,” Zeke said, mouth agape in shock.