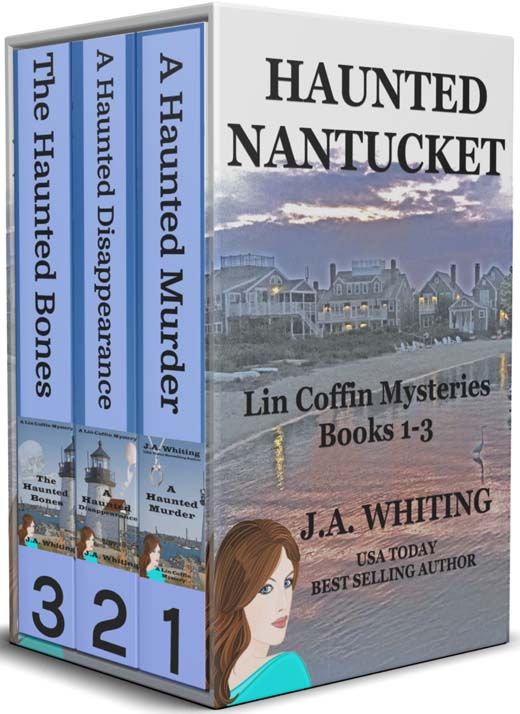 A HAUNTED MURDER :This is book 1 in the Lin Coffin Mystery series.After the death of her grandfather, Lin Coffin returns to the island of her birth, Nantucket, Massachusetts, to make a new start in life, but things don't begin smoothly. After not seeing one for twenty years, a ghost appears in her back yard and her cousin, Viv, becomes a suspect in a murder. Lin and Viv, with the help of several others, work to solve the crime before the killer strikes again.

This story has ghosts and some mild paranormal elements.

A HAUNTED DISAPPEARANCE:This is book 2 in the Lin Coffin Mystery series.The main mystery is solved in each book but you will enjoy the stories more if they are read in order.Lin Coffin is enjoying her new life on the island of Nantucket, Massachusetts. One night while helping her cousin and her cousin’s band members load instruments and equipment into a van, she meets a friendly young couple who help her after she falls on the sidewalk. The next day while working in the garden of a new client, Lin sees the girl again but there is something very wrong.

Lin and her cousin, Viv, with the help of several others, work to solve the mystery of the girl’s disappearance.This story has ghosts and some mild paranormal elements.

THE HAUNTED BONES:This is book 3 in the Lin Coffin series.Lin Coffin and her new business partner, Leonard, have started a landscaping business on the island of Nantucket, Massachusetts. One evening while reviewing a new project, Lin's dog digs in a pile of dirt in the new client's yard and finds a bone. When Lin goes to see what the little creature has found, she sees the ghost of her ancestor watching her and knows that the bone must be human.

Lin and her cousin, Viv, with the help of several others, work to solve the mystery of who the bone belongs to, how it got in the yard, and who put it there.

This story has ghosts and some mild paranormal elements.