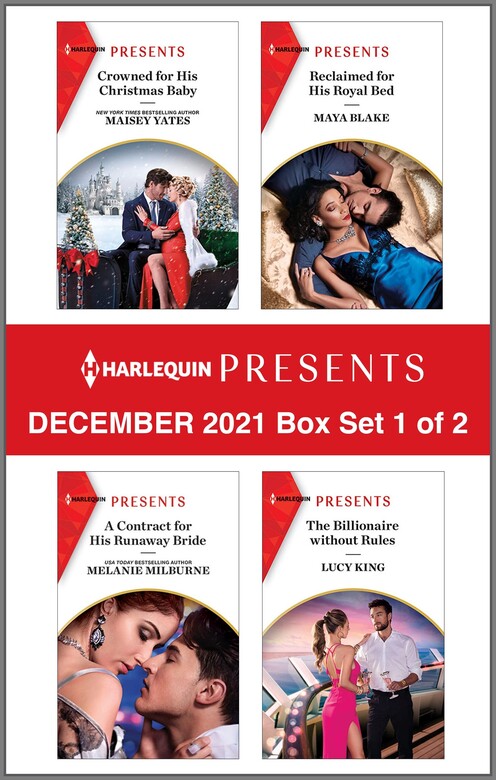 Harlequin Presents brings you four full-length stories in one collection! Experience the glamorous lives of royals and billionaires, where passion knows no bounds. Be swept into a world of luxury, wealth and exotic locations.

This box set includes:
CROWNED FOR HIS CHRISTMAS BABY (A Pregnant Princesses novel)
by NEW YORK TIMES bestselling author Maisey Yates
After being swept up in Prince Vincenzo’s revenge plans, Eloise is carrying his surprise heir. And the man who vowed never to marry is claiming her – as his royal Christmas bride!


A CONTRACT FOR HIS RUNAWAY BRIDE (A Scandalous Campbell Sisters novel)
by USA TODAY bestselling author Melanie Milburne
Elodie needs billion-dollar backing to make a success of her fashion brand. As if pitching to a billionaire wasn’t hard enough, Lincoln Lancaster is her ex-fiancé! He’ll help her, but his deal has one condition: she’ll finally meet him at the altar…


RECLAIMED FOR HIS ROYAL BED
by Maya Blake
Having tracked Delphine down, King Lucca can finally lay his family’s scandalous past to rest…if she agrees to play the golden couple in public. And once again set alight by his touch, will Delphie reveal the explosive reason why she left…?

THE BILLIONAIRE WITHOUT RULES (A Lost Sons of Argentina novel)
by Lucy King
Billionaire Max plays by his own rules but, there’s one person stood between him and the truth of his birth: tantalizingly tenacious private investigator Alex. Who’s demanding they do things her way!

For more stories filled with passion and drama, look for Harlequin Presents December 2021 Box Set – 2 of 2