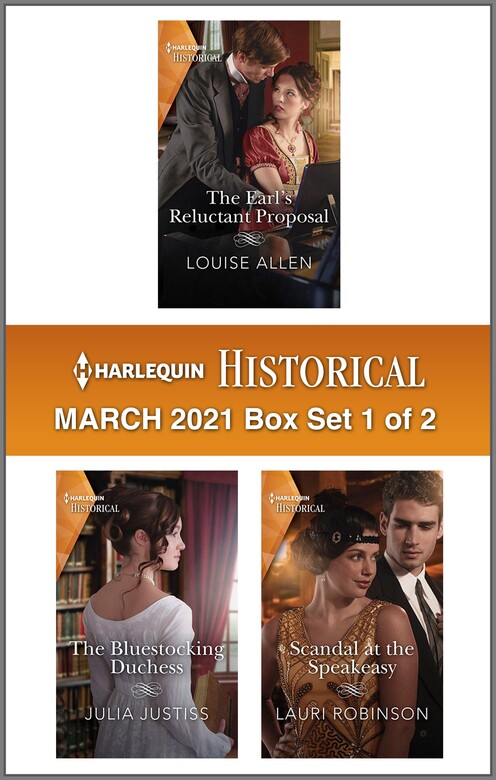 Do you dream of wicked rakes, gorgeous Highlanders and muscled Viking warriors? Harlequin® Historical brings you three new full-length titles in one collection! This box set includes: THE EARL’S RELUCTANT PROPOSAL Liberated Ladies By Louise Allen (Regency) When eligible earl Max Fenton enlists prickly piano teacher Lucy’s help at a house party, he doesn’t expect to be inadvertently compromised…and forced to make a more permanent proposal! THE BLUESTOCKING DUCHESS Heirs in Waiting By Julia Justiss (Regency) Librarian Jocelyn’s friendship with Mr. Alex Cheverton is threatened when he unexpectedly becomes heir to a dukedom! Now he must marry a suitable debutante, not consort with an earnest bluestocking like her… SCANDAL AT THE SPEAKEASY Twins of the Twenties By Lauri Robinson (1920s) New York cop Patrick McCormick’s promised to reunite schoolteacher Lisa with her father. But she also runs an underground speakeasy! She’s on the wrong side of the law, but can Patrick resist the tough-yet-innocent lady…? Look for Harlequin® Historical’s March 2021 Box Set 2 of 2, filled with even more timeless love stories!