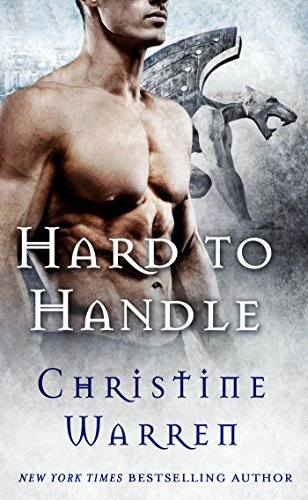 From New York Times bestselling author Christine Warren comes Hard to Handle, the fifth book in her Gargoyles series about a tale that is as old as time…and a love as strong as stone.

The only male among four sisters, Michael Drummond is no stranger to women’s strength and formidable will. But when a fierce woman warrior from another realm bursts into his life, bringing with her a battle between good and evil, Michael is overcome by an explosive dose of desire that only this stunningly beautiful woman can inspire.

The first and only of her kind, Ash is a lone female gargoyle, a creature destined to protect mankind from Demons determined to unleash their darkest forces.
But her bone-deep instinct to do battle is turned off-kilter by her untamed attraction to the dangerously handsome human she can’t stay away from. If they manage to keep the world safe, can they turn the passion crackling between them into a love that will withstand the test of time?

“Soars with fun, witty characters and nonstop action.” - Publishers Weekly on Stone Cold Lover
Don't miss the other books in the Gargoyle series: