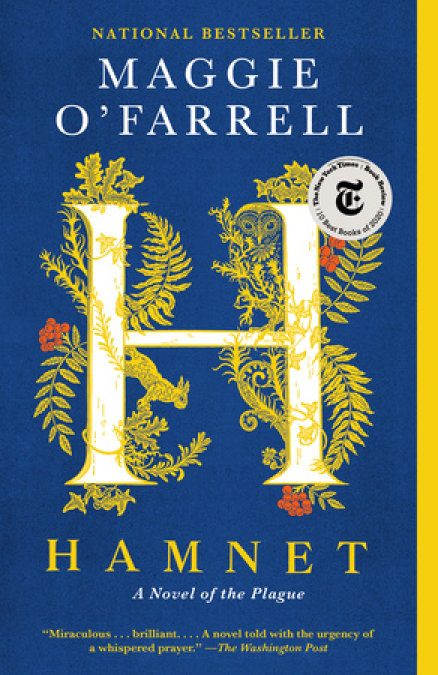 Drawing on Maggie O'Farrell's long-term fascination with the little-known story behind Shakespeare's most enigmatic play, HAMNET is a luminous portrait of a marriage, at its heart the loss of a beloved child.

Warwickshire in the 1580s. Agnes is a woman as feared as she is sought after for her unusual gifts. She settles with her husband in Henley street, Stratford, and has three children: a daughter, Susanna, and then twins, Hamnet and Judith. The boy, Hamnet, dies in 1596, aged eleven. Four years or so later, the husband writes a play called Hamlet.

Award-winning author Maggie O'Farrell's new novel breathes full-blooded life into the story of a loss usually consigned to literary footnotes, and provides an unforgettable vindication of Agnes, a woman intriguingly absent from history. 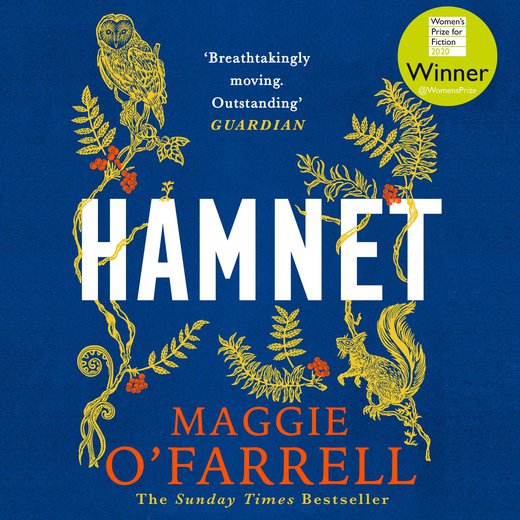 A boy is coming down a flight of stairs.

The passage is narrow and twists back on itself. He takes each step slowly, sliding himself along the wall, his boots meeting each tread with a thud.

Near the bottom, he pauses for a moment, looking back the way he has come. Then, suddenly resolute, he leaps the final three stairs, as is his habit. He stumbles as he lands, falling to his knees on the flagstone floor.

It is a close, windless day in late summer, and the downstairs room is slashed by long strips of light. The sun glowers at him from outside, the windows latticed slabs of yellow, set into the plaster.

He gets up, rubbing his legs. He looks one way, up the stairs; he looks the other, unable to decide which way he should turn.

The room is empty, the fire ruminating in its grate, orange embers below soft, spiralling smoke. His injured kneecaps throb in time with his heartbeat. He stands with one hand resting on the latch of the door to the stairs, the scuffed leather tip of his boot raised, poised for motion, for flight. His hair, light-coloured, almost gold, rises up from his brow in tufts.

There is no one here.

He sighs, drawing in the warm, dusty air and moves through the room, out of the front door and on to the street. The noise of barrows, horses, vendors, people calling to each other, a man hurling a sack from an upper window doesn’t reach him. He wanders along the front of the house and into the neighbouring doorway.

The smell of his grandparents’ home is always the same: a mix of woodsmoke, polish, leather, wool. It is similar yet indefinably different from the adjoining two-roomed apartment, built by his grandfather in a narrow gap next to the larger house, where he lives with his mother and sisters. Sometimes he cannot understand why this might be. The two dwellings are, after all, separated by only a thin wattled wall but the air in each place is of a different ilk, a different scent, a different temperature.
This house whistles with draughts and eddies of air, with the tapping and hammering of his grandfather’s workshop, with the raps and calls of customers at the window, with the noise and welter of the courtyard out the back, with the sound of his uncles coming and going.

But not today. The boy stands in the passageway, listening for signs of occupation. He can see from here that the workshop, to his right, is empty, the stools at the benches vacant, the tools idle on the counters, a tray of abandoned gloves, like handprints, left out for all to see. The vending window is shut and bolted tight. There is no one in the dining hall, to his left. A stack of napkins is piled on the long table, an unlit candle, a heap of feathers. Nothing more.

He calls out, a cry of greeting, a questioning sound. Once, twice, he makes this noise. Then he cocks his head, listening for a response.

Nothing. Just the creaking of beams expanding gently in the sun, the sigh of air passing under doors, between rooms, the swish of linen drapes, the crack of the fire, the indefinable noise of a house at rest, empty.

His fingers tighten around the iron of the door handle. The heat of the day, even this late, causes sweat to express itself from the skin of his brow, down his back. The pain in his knees sharpens, twinges, then fades again.

The boy opens his mouth. He calls the names, one by one, of all the people who live here, in this house. His grandmother. The maid. His uncles. His aunt. The apprentice. His grandfather. The boy tries them all, one after another. For a moment, it crosses his mind to call his father’s name, to shout for him, but his father is miles and hours and days away, in London, where the boy has never been.

But where, he would like to know, are his mother, his older sister, his grandmother, his uncles? Where is the maid? Where is his grandfather, who tends not to leave the house by day, who is usually to be found in the workshop, harrying his apprentice or reckoning his takings in a ledger? Where is everyone? How can both houses be empty?

He moves along the passageway. At the door to the workshop, he stops. He throws a quick glance over his shoulder, to make sure nobody is there, then steps inside.

His grandfather’s glove workshop is a place he is rarely allowed to enter. Even to pause in the doorway is forbidden. Don’t stand there idling, his grandfather will roar. Can’t a man do an honest day’s work without people stopping to gawk at him? Have you nothing better to do than loiter there catching flies?

Hamnet’s mind is quick: he has no trouble understanding the schoolmasters’ lessons. He can grasp the logic and sense of what he is being told, and he can memorise readily. Recalling verbs and grammar and tenses and rhetoric and numbers and calculations comes to him with an ease that can, on occasion, attract the envy of other boys. But his is a mind also easily distracted. A cart going past in the street during a Greek lesson will draw his attention away from his slate to wonderings as to where the cart might be going and what it could be carrying and how about that time his uncle gave him and his sisters a ride on a haycart, how wonderful that was, the scent and prick of new-cut hay, the wheels tugged along to the rhythm of the tired mare’s hoofs. More than twice in recent weeks he has been whipped at school for not paying attention (his grandmother has said if it happens once more, just once, she will send word of it to his father). The schoolmasters cannot understand it. Hamnet learns quickly, can recite by rote, but he will not keep his mind on his work.

The noise of a bird in the sky can make him cease speaking, mid-utterance, as if the very heavens have struck him deaf and dumb at a stroke. The sight of a person entering a room, out of the corner of his eye, can make him break off whatever he is doing—eating, reading, copying out his schoolwork—and gaze at them as if they have some important message just for him. He has a tendency to slip the bounds of the real, tangible world around him and enter another place. He will sit in a room in body, but in his head he is somewhere else, someone else, in a place known only to him. Wake up, child, his grandmother will shout, snapping her fingers at him. Come back, his older sister, Susanna, will hiss, flicking his ear. Pay attention, his schoolmasters will yell. Where did you go? Judith will be whispering to him, when he finally re-enters the world, when he comes to, when he glances around to find that he is back, in his house, at his table, surrounded by his family, his mother eyeing him, half smiling, as if she knows exactly where he’s been.

In the same way, now, walking into the forbidden space of the glove workshop, Hamnet has lost track of what he is meant to be doing. He has momentarily slipped free of his moorings, of the fact that Judith is unwell and needs someone to care for her, that he is meant to be finding their mother or grandmother or anyone else who might know what to do.

Skins hang from a rail. Hamnet knows enough to recognise the rust-red spotted hide of a deer, the delicate and supple kidskin, the smaller pelts of squirrels, the coarse and bristling boarskin. As he moves nearer to them, the skins start to rustle and stir on their hangings, as if some life might yet be left in them, just a little, just enough for them to hear him coming. Hamnet extends a finger and touches the goat hide. It is unaccountably soft, like the brush of river weed against his legs when he swims on hot days. It sways gently to and fro, legs splayed, stretched out, as if in flight, like a bird or a ghoul.

Hamnet turns, surveys the two seats at the workbench: the padded leather one worn smooth by the rub of his grandfather’s breeches, and the hard wooden stool for Ned, the apprentice. He sees the tools, suspended from hooks on the wall above the work bench. He is able to identify those for cutting, those for stretching, those for pinning and stitching. He sees that the narrower of the glove stretchers—used for women—is out of place, left on the bench where Ned works with bent head and curved shoulders and anxious, nimble fingers. Hamnet knows that his grandfather needs little provocation to yell at the boy, perhaps worse, so he picks up the glove stretcher, weighing its warm wooden heft, and replaces it on its hook.

He is just about to slide out the drawer where the twists of thread are kept, and the boxes of buttons—carefully, carefully, because he knows the drawer will squeak—when a noise, a slight shifting or scraping, reaches his ears.

Within seconds, Hamnet has darted out, along the passageway and into the yard. His task returns to him. What is he doing, fiddling in the workshop? His sister is unwell: he is meant to be finding someone to help.

He bangs open, one by one, the doors to the cookhouse, the brewhouse, the washhouse. All of them empty, their interiors dark and cool. He calls out again, slightly hoarse this time, his throat scraped with the shouting. He leans against the cookhouse wall and kicks at a nutshell, sending it skittering across the yard. He is utterly confounded to be so alone. Someone ought to be here; someone always is here. Where can they be? What must he do? How can they all be out? How can his mother and grandmother not be in the house, as they usually are, heaving open the doors of the oven, stirring a pot over the fire? He stands in the yard, looking about himself, at the door to the passageway, at the door to the brewhouse, at the door to their apartment. Where should he go? Whom should he call on for help? And where is everyone?