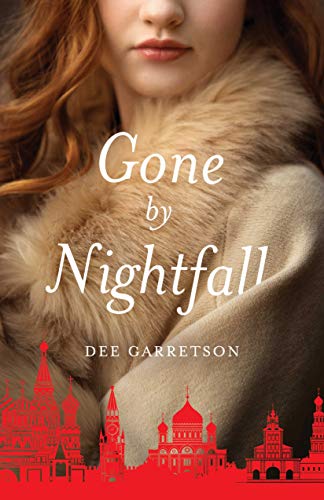 A young woman is torn between her home and her dreams in Dee Garretson's Gone by Nightfall, a thrilling YA novel set during the Russian Revolution.

It’s 1917, and Charlotte Mason is determined to make a life for herself in czarist Russia. When her mother dies, Charlotte is forced to put her plans to go to medical school aside to care for her unruly siblings. Then a handsome new tutor arrives. Charlotte has high hopes that he’ll stay, freeing her up to follow her dreams of becoming a doctor. But there’s more to Dmitri that meets the eye.

Just when she thinks she can get her life back, Russia descends into revolution and chaos. Now, not only does Charlotte need to leave Russia, she needs to get her siblings out too--and fast.

Can Charlotte flee Russia, keep her siblings safe, and uncover Dmitri’s many secrets before she runs out of time?

Praise for Gone by Nightfall

"Amid spy intrigue, coded messages, fairly improbable escapes, a budding romance, and bold derring-do, our quick-thinking, thoroughly engaging protagonist triumphs and the plot never slows. Garretson reaches beyond adventure, too, providing a haunting nuance to the horrors of war through her heroine’s eyes... An action-packed, yet sobering journey into the war to end all wars." —Booklist

"This is the sort of book you want to hide in your closet and read so that no one disturbs you until you're completely finished." —Samantha Hastings, author of The Last Word

I PULLED THE collar of my coat close around my face as I sneaked between the sleighs and automobiles parked in front of the grand duke’s house, hoping I could get beyond the light of the braziers before our coachman spotted me. If Yermak saw me, he’d want to know why I was leaving the ball early and without my stepfather.

No one inside would miss me. The partygoers were too busy sharing the latest rumors swirling around the czar and the czarina. And even though I liked dancing, the choice of partners was limited to friends of my stepfather, or staff officers who had wrangled headquarters jobs for themselves to keep away from the fighting. For some reason those men felt the need to constantly remind one of their great wisdom and wit.

Sewing up a saber cut is not like embroidering a handkerchief, my dear Miss Mason! You should stay with your nursing instead of trying to become a doctor, though you should really attend to soldiers instead of working in that absurd hospital for women. I must say, you American girls find the strangest ways to occupy your time!

The captain who had made this pronouncement about my future was so pleased with himself that I wished I’d had a suture needle handy. I would have sewn the ends of his overly long mustache to his overly bushy eyebrows before he knew what was happening. I hoped by the time I returned, he’d have found another victim to bore.

The sounds of the orchestra faded as I walked away toward the square, picking up my pace as I moved into the darkened streets. The snow had tapered off, so I was at least able to see where to put my next step. I loved Petrograd during the day, when the sun shone on the beautiful buildings painted in a dazzling array of pastels, but at night the city changed. Then the silent buildings felt more like giant tombs, and I could never forget the story visitors were told: that the city was built on bones, the skeletons of a hundred thousand serfs who were forced to erect a city on a swamp, all to please the ego of a czar.

I breathed easier when I saw Znamenskaya Square ahead of me. Since it was nearly two a.m., the square was mostly empty, though there were a few groups huddled around small fires, refugees who had poured into the city from the war zones with nowhere to go and no money to procure a bed or even a warm spot on a floor.

When I reached the entrance to the hospital, I didn’t see the dark shape standing outside the circle of light the streetlamp cast until I heard a soft voice that made me jump.

“Charlotte, I’m here,” Raisa said as she moved into the light.

“You were holding so still I didn’t see you.” I put my hand on my chest. “I think my heart skipped a beat or two.”

She laughed, a sound I hadn’t heard from her for a long time. “Then my practice has paid off. Tell your brothers I’ve been working at staying still so I can be a better vanishing lady in your magic show. When we’re able to practice again, I want to be ready.”

“I’ll tell them,” I said, though it was a bit of a struggle for me to imagine a future that included amusing ourselves with our little family circus again.

She loosened the shawl that was draped around her head, shaking off the snow. “I want you to teach me the trick of pulling a rabbit out of a hat, too. I promised my sister I would show her that when I see her again.”

“We’ll have to recruit some new rabbits,” I said. “Mr. Hatter and Miss Fluff have grown too big to fit in a hat. They spend all day lazing around their pen being spoiled now.”

Raisa smiled, but then a shiver overtook her, and she wrapped her arms around herself. I noticed that her gloves had holes in them. I knew I wouldn’t be able to get her to take mine, but next time I’d bring her another pair, some that had been my mother’s. She wouldn’t refuse those.

“Come into the hospital and get warm,” I urged. “We can talk a little. It’s been weeks.” I’d missed her so much, and I didn’t know when we’d be able to meet again.

“I wish I could, but I don’t want anyone inside to see me.”

“There is only a night nurse on duty. We can trust her. You’ll be safe, I promise.”

“You don’t know that.” She lowered her voice. “People are so desperate, they’ll try to sell any information they have to the Okhrana for a few kopeks.”

Even the mention of the Okhrana, the secret police everyone feared, sent a shiver down my back. I knew the nurses were on my side, but I understood why Raisa didn’t trust people she didn’t know. Her father had been betrayed by one of his own employees and sent to prison for speaking against the czar inside his own newspaper office.

Raisa pulled a chamois bag out of her pocket and gave it to me, the bottles inside clinking together. “It’s only four. I was afraid to take more.”

“Four is more than I’d hoped for! We ran out of the last of our laudanum yesterday, and we don’t have anything else that helps with the patients’ pain. Are you sure your uncle won’t notice?”

“He won’t. I changed the inventory numbers, and he’s usually so drunk he can’t remember what he has.” She shuddered. “It’s amazing he still has any patients left at all. I wouldn’t let him near me if I was sick. The fumes from his breath would be enough to finish me off.”

I hated that she had to live with that man. I knew she wasn’t even allowed to practice her music anymore, because her uncle said the noise of the piano irritated him. “I wish you would come stay with us,” I said. “You could find another job, or if you can’t, the offer for you to be the twins’ governess still stands. The two of them are too much for their poor nursemaid.”

Even in the faint glow of the streetlights, I could see her face take on the fierce look she so often wore. “You know I don’t take charity,” she said. “And I would be a terrible governess. Besides, I have to stay in good graces with my uncle so he’ll keep sending my mother and my sister money. He says he’s sure they are wasting what he sends them, though I know from my mother’s letters he’s only giving them a pittance. I can’t give them anything at all, so I can’t make him angry.”

If I believed in curses, I would have put a particularly potent one on the man. Just when I thought he couldn’t get any worse, he found a way. “Have you heard any word about your father?” I asked.

“The guard who takes the bundles of food I bring him said he is all right, though his hands are swollen with rheumatism.” She brushed at her face and I knew she was trying to get rid of a tear. Raisa hated crying. According to her, it served no purpose, so she didn’t allow it. I pretended not to notice, because I knew she wouldn’t want me to. Better to talk of something else.

“Where is your uncle getting the laudanum?” I asked. “It’s dangerous for you to keep taking it. Maybe I can go directly to his source.”

“He’s got a friend at one of the embassies who has them brought into the country in the diplomatic bags. I don’t know which embassy.”

An embassy contact didn’t do me any good. Even if Raisa could find out who it was, I doubted they’d admit to their black-market work unless I could offer far more money than I had to get in on it.

“I need to get back if I’m going to get any sleep tonight.” Raisa reached into her pocket and pulled out a small book. “I brought this for you to give to Miles. It has some poems he might like.”

I tried not to show my surprise at the gift. I had thought Raisa had gotten over her infatuation with my brother months ago. Raisa was so sure of everything that she couldn’t comprehend Miles wouldn’t return her regard. She didn’t seem to realize he barely noticed her, and I didn’t want to hurt her by pointing that out.

“How is he?” she asked. “He looked fine when I saw him, but I know that doesn’t mean much.”

“When did you see him?” He hadn’t mentioned it to me.

“Oh,” I said. That was an odd place for Miles to frequent. Nevsky Prospekt was Petrograd’s main shopping street, and I couldn’t imagine Miles actually shopping. He expected most things to appear before him as if by actual magic. “He’s been better this winter than last, at least.”

“I’m glad.” She looked around before she spoke again, even though we were all alone. “When revolution comes and my father is let out, Miles can come work for the newspaper. He’s such a good writer, and I’m sure his health will improve when he can do something he likes.”