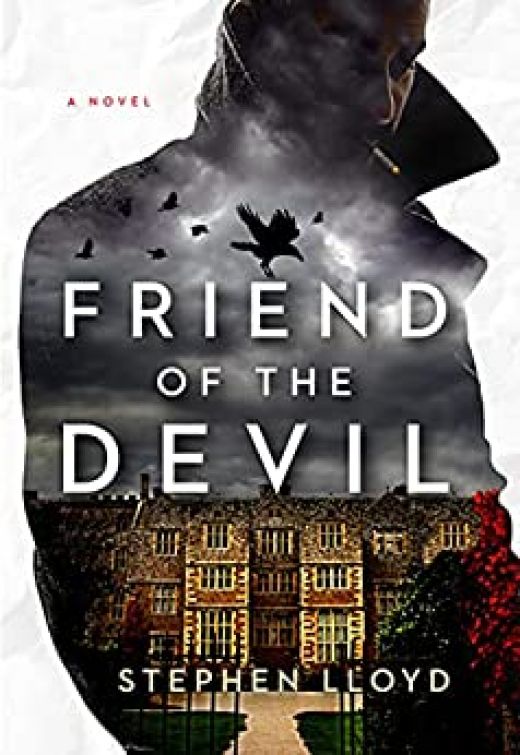 High school can be hell. Literally.

Welcome to Danforth Putnam, boarding school for the elite, sprawled across its own private island off the coast of New England. Sam, a war vet who feels sure he’s seen it all, has been called here to find a stolen rare book. But as he corners D&D nerds, grills steroid-raging linemen, and interviews filthy-rich actresses, he soon senses that something far stranger—“witchy”, in fact—is afoot. When students start to meet mysterious and gruesome deaths, Sam realizes just how fast the clock is ticking.

After joining forces with plucky, epilepsy-defying school reporter Harriet, Sam ventures into increasingly dark territory, unravelling a supernatural mystery that will upend everything he thinks he knows about this school—and then shatter his own reality.

Toss Dracula into a blender, throw in a shot of hard-boiled detective fiction, splash in a couple drops of Stranger Things, and pour yourself a nice tall glass of Friend of the Devil. 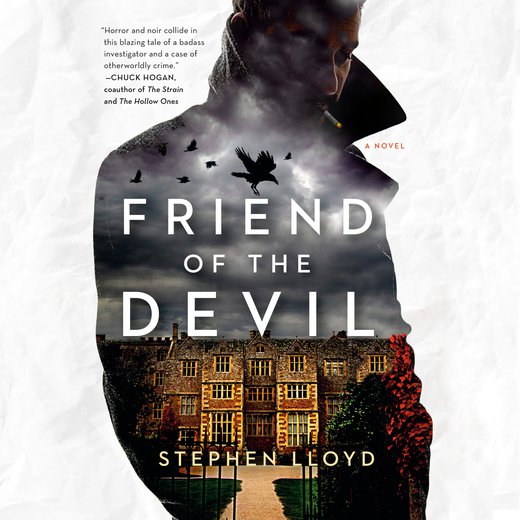 A Wham-O Frisbee with a spinning yin-and-yang symbol sailed over the quad, disappeared for a moment in the sun, then wafted downward until a leaping Rottweiler dragged it to earth in its jaws. A gaggle of barefoot teenage boys with facial hair dyed unnatural colors and twisted into pitchforks or pincers tousled the Rottweiler’s head. A dozen starved-looking kids from the cross-country team, punished by the unfairly warm October day, sprinted past in a glistening blur of Dolfin shorts. An Asian boy with an orange Mohawk wearing a sleeveless Black Flag T-shirt, camo pants, combat boots and a dog collar dabbed at fresh piercings with a Union Jack bandanna he moistened in rubbing alcohol. He scuttled between a pair of glossed and pretty teenage girls who shared grimaces and “Icks” with their glossed and pretty teenage boyfriends, the four of them tall, blond, tanned and sockless in Top-Siders, khakis and pastel Lacoste tennis shirts. A tall, pimply kid wearing a navy blazer and a Ronald Reagan button the size of a hubcap marched up to a small girl with a crew cut and dressed in a flannel shirt who was waving a pink triangle poster. He attempted to rip the poster, but she smacked his glasses off and called him a Nazi, and he skulked away, cursing.

It was a diverse group, Sam noted, in every way but one. They were all filthy rich. At least that’s what Sam assumed. He didn’t really know what the tuition at a school like this was, but it had to be astronomical. They had their own island, for Christ’s sake, twenty square miles off the Massachusetts coast. On it were indoor and outdoor tennis courts, basketball courts, squash courts, Olympic-size pools, a soccer field, a football stadium, a hockey rink, horse stables (for the polo and equestrian teams), a television studio, three theaters and a science lab you could probably smash atoms in. Every building looked like it had been painted yesterday, and the surrounding lawns, hedge paths, rosebushes and topiaries were so meticulously groomed they made his marine buzz cut look shaggy.

Sam sparked his Zippo and lit a Kent. A squat, imperious woman leading a dozen small kids (too small to be in high school, he noted) scowled at him and sniffed at his cigarette. He smiled at her with a lascivious wink and French-inhaled luxuriously until she huffed away, her small train in tow.

“What’d the cops say?” Sam asked the headmaster as they ambled across the quad.

Thomas Arundel was a large man with what Sam noticed was a great head of hair for a guy his age. It had gone gray, some of it white, but every follicle he’d ever had appeared to still be rooted. Tom’s head, Sam thought, did not match his body. Above the neck, with his distinguished silver mane, wire-rimmed glasses and unblemished skin, he was the picture of an effete academic. Below the neck, with his rough, powerful bulk and hands the size of catchers’ mitts, he looked like a dockworker or a former defensive tackle.

“They sent a patrolman. Not a detective. A kid in uniform barely old enough to shave,” the headmaster said. “He did a full twenty minutes of investigating, which mostly involved striking up conversations with pretty female students. Since then, I’ve left five unreturned messages.”

The yin-and-yang Frisbee bounced off the headmaster’s chest and into one of his giant hands. Several players froze, staring at him and cringing.

“Gentlemen,” the headmaster said. He closed his hand and snapped the Frisbee in half, as though it were made of tinfoil, the hard plastic cracking like gunfire. “Do be more careful.” He neatly stacked the Frisbee halves and handed them to a chastened lad, who silently backed away.

Sam caught himself gaping and clamped his lips around the cigarette just before it tumbled out of his mouth. “Cops know how much the book’s worth?”

Tom sighed. “Danforth Putnam is technically in West Cabot County. Last year, West Cabot County had three murders, two dozen rapes, nearly four hundred aggravated assaults and eighteen arsons. I called about a stolen book. Trust me, Mr. Gregory, they don’t care what it’s worth. As far as anyone on that side of the Atlantic is concerned, this is an island full of spoiled rich kids with spoiled-rich-kid problems, and a stolen book, even a valuable one, fits firmly in that category.”

Sam more or less agreed with those on that side of the Atlantic. “A place like this, obviously you have your own security.”

“Well, wait till I get their reports before you fire any of them,” said Sam. His eyes fell on the Asian kid with the orange Mohawk and piercings. “Halloween a few days early this year?”

The headmaster glanced at the Asian boy and sighed. “Today’s youth, Mr. Gregory.”

Sam found himself before the same woman who’d glowered at him for smoking on the quad. There were five feet to her, tops, carried mostly in the torso with her enormous bosom and bullfrog neck. She looked unnaturally white, with wet black eyes pushed deep into her pale, doughy face beneath eyebrows that seemed frozen in angry arches. She looked like a snowman that had been brought to life and was none too happy about it. When she saw Sam, her mouth twisted into a citrus pucker. “May I help you?” she asked in a voice that could freeze pipes.

“My name’s Sam Gregory,” he said. “I’m an insurance investigator for SATCO Mutual.”

She snorted. “I know what you are.”

Sam tilted his head and gave her a smile. “You know, as a private investigator, I’ve gotten very good at reading people. So let’s stop playing games. Obviously, you’re into me. Is there a Mr. Ms. Lee?”

“I just think that, perhaps, we resorted to you rather quickly,” Ms. Lee said. “We might have made some effort to find the book ourselves before summoning the likes of you to prowl about the school grounds.”

The likes of me, Sam thought. Charming. He wasn’t entirely sure of his ancestry. It was likely a mishmash of things, because he confused pretty much everyone who looked at him. Maybe she didn’t like being confused. Maybe his tattoo read a little more roughneck than she liked. Or maybe he was there because of her screwup and she just didn’t want that coming out. Time would tell.

“I’m awful sorry you find my presence here so distasteful, Ms. Lee, and I will do my best not to sully the school grounds with my prowling. In fact, I can wrap this up real quick if you want to withdraw your insurance claim. How’s that sound?”

“Please get on with your investigation, Mr. Gregory,” she said.

He took out a notebook and pencil. “You recently reported the loss slash theft of an eleventh-century manuscript, is that right?”

“There was no loss slash, just theft, and would you mind refraining from that disgusting habit while on school grounds?”

Sam looked from her to his notebook. “Writing?”

Sam smiled. “Yeah, the ones I saw on the quad with you looked a little young for high school.” He glanced around. “Ashtray?”

She took his cigarette between her thumb and forefinger, holding it at arm’s length as if it were the tail of a dead rat, and stubbed it out in a teacup saucer. “I oversee all the children from the lower campus,” she said. “That’s for grades three to seven.”

“You have third-graders at a boarding school?”

“There are women who marry men with children from previous marriages they don’t want to be reminded of,” Ms. Lee explained. “There are wealthy foreigners who want their children well away from the dangers of their homeland. And then there are the foundlings.”

“Orphans,” said Ms. Lee, pronouncing the word slowly and loudly as though for someone new to English. “Danforth Putnam isn’t merely an elite boarding school. It also runs the oldest continuously operating home for orphans in the United States. Since 1654, boys and girls as young as eight have been boarded and raised and taught here for free. Danforth Putnam is first and foremost a philanthropic institution.”

Sam nodded. “Your cat is drinking your tea.”

Ms. Lee turned to see a black cat, having noiselessly leapt onto her desk, now whiskers-deep in her Earl Grey. “Crowley, down!” she said, shoving the cat airborne.

Sam tapped his notebook with his pencil. “Report says the book was in a safe?”

Ms. Lee sniffed, grabbed a cane propped against the wall behind her and walked over to a large portrait of a Puritan with a broad, flat nose, a square jaw, shoulder-length brown hair and the smuggest smile Sam had ever seen. The smile seemed wildly out of place on a Puritan. He had assumed Puritans spent their whole lives scowling with disapproval. The frame was inscribed Mason Alderhut—Founder.

Ms. Lee removed the portrait, revealing a wall safe, which she opened. “I’m not sure how they cracked it, but I plan to write a very strongly worded letter to the manufacturer.”

Sam glanced at the safe, then returned to writing. “What you have there, Ms. Lee, is an Etson 5000 series. It has nylon wheels, false tumbler notches and a bunch of other neato stuff that means it can’t be cracked without explosives. And since parts of it aren’t strewn all over your carpet, whoever opened it had the combo, which ain’t the manufacturer’s fault. So, who knows the combo?”