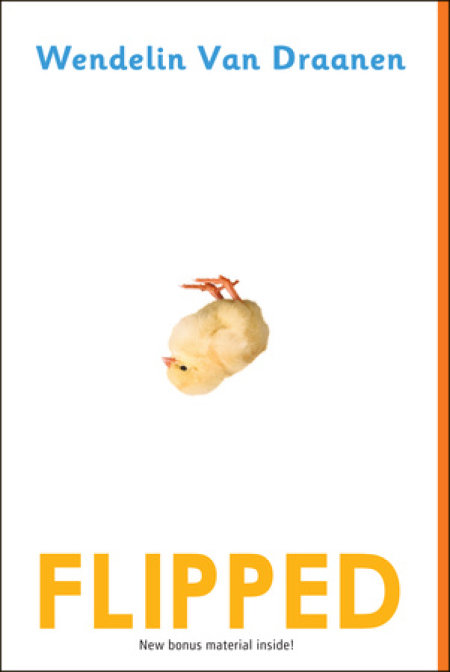 The first time she saw him, she flipped. The first time he saw her, he ran. That was the second grade, but not much has changed by the seventh. Juli says: “My Bryce. Still walking around with my first kiss.” He says: “It’s been six years of strategic avoidance and social discomfort.” But in the eighth grade everything gets turned upside down: just as Bryce is thinking that there’s maybe more to Juli than meets the eye, she’s thinking that he’s not quite all he seemed.

This is a classic romantic comedy of errors told in alternating chapters by two fresh, funny voices.

The updated anniversary edition contains 32 pages of extra backmatter:  essays from Wendelin Van Draanen on her sources of inspiration, on the making of the movie of Flipped, on why she’ll never write a sequel, and a selection of the amazing fan mail she’s received.

Awards and accolades for Flipped:

“We flipped over this fantastic book, its gutsy girl Juli and its wise, wonderful ending.” — The Chicago Tribune

“With a charismatic leading lady kids will flip over, a compelling dynamic between the two narrators and a resonant ending, this novel is a great deal larger than the sum of its parts.” —Publishers Weekly, Starred review

All I've ever wanted is for Juli Baker to leave me alone For her to back off-you know, just give me some space.

It all started the summer before second grade when our moving van pulled into her neighborhood. And since we're now about done with the eighth grade, that, my friend, makes more than half a decade of strategic avoidance and social discomfort.

She didn't just barge into my life. She barged and shoved and wedged her way into my life. Did we invite her to get into our moving van and start climbing all over boxes? No! But that's exactly what she did, taking over and showing off like only Juli Baker can.

My dad tried to stop her. "Hey!" he says as she's catapulting herself on board. "What are you doing? You're getting mud everywhere!" So true, too. Her shoes were, like, caked with the stuff.

She didn't hop out, though. Instead, she planted her rear end on the floor and started pushing a big box with her feet. "Don't you want some help?" She glanced my Way. "It sure looks like you need it."

I didn't like the implication. And even though my dad had been tossing me the same sort of look all week, I could tell-he didn't like this girl either. "Hey! Don't do
that," he warned her. "There are some really valuable things in that box."

"Oh. Well, how about this one?" She scoots over to a box labeled LENox and looks my way again. "We should push it together!"

"No, no, no!" my dad says, then pulls her up by the arm. "Why don't you run along home? Your mother's probably wondering where you are."

This was the beginning of my soon-to-become-acute awareness that the girl cannot take a hint. Of any kind. Does she zip on home like a kid should when they've been invited to leave No. She says, "Oh, my mom knows where I am. She said it was fine." Then she points across the street and says, "We just live right over there."

My father looks to where she's pointing and mutters "Oh boy." Then he looks at me and winks as he says, "Bryce, isn't it time for you to go inside and help your mother?"

I knew right off that this was a ditch play. And I didn't think about it until later, but ditch wasn't a play I'd run with my dad before. Face it, pulling a ditch is not something discussed with dads. It's like, against parental law to tell your kid it's okay to ditch someone, no matter how annoying or muddy they might be.

But there he was, putting the play in motion, and man, he didn't have to wink twice. I smiled and said, "Sure thing!" then jumped off the liftgate and headed for my new front door.

I heard her coming after me but I couldn't believe it. Maybe it just sounded like she was chasing me; maybe she was really going the other way. But before I got up the nerve to look, she blasted right past me, grabbing my arm and yanking me along.

This was too much. I planted myself and was about to tell her to get lost when the weirdest thing happened. I was making this big windmill motion to break away from her, but somehow on the downswing my hand wound up tangling into hers. I couldn't believe it. There I was, holding the mud monkey's hand!

I tried to shake her off, but she just clamped on tight and yanked me along, saying, "C'mon!"

My mom came out of the house and immediately got the world's sappiest look on her face. "Well, hello," she says to Juli.

I'm still trying to pull free, but the girl's got me in a death grip. My mom's grinning, looking at our hands and my fiery red face. "And what's your name, honey?"

"Julianna Baker. I live right over there," she says, pointing with her unoccupied hand.

"Well, I see you've met my son," she says, still grinning away.

Finally I break free and do the only manly thing available when you're seven years old-I dive behind my mother.

Mom puts her arm around me and says, "Bryce, honey, why don't you show Julianna around the house?"

I flash her help and warning signals with every part of my body, but she's not receiving. Then she shakes me off and says, "Go on."

Juli would've tramped right in if my mother hadn't noticed her shoes and told her to take them off. And after those were off, my mom told her that her dirty socks had to go, too. Juli wasn't embarrassed. Not a bit. She just peeled them off and left them in a crusty heap on our porch.

I didn't exactly give her a tour. I locked myself in the bathroom instead. And after about ten minutes of yelling back at her that no, I wasn't coming out anytime soon, things got quiet out in the hall. Another ten minutes went by before I got the nerve to peek out the door.