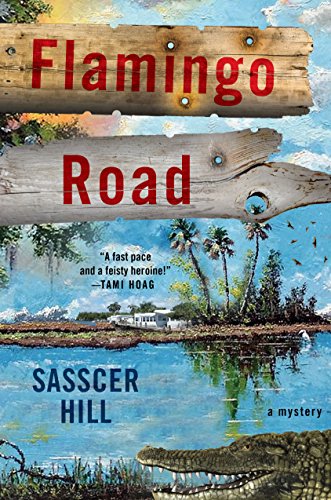 Baltimore police officer Fia McKee is put on leave for excessive use of force after interfering in a crime that turns deadly. Given a second chance, she is sent to work undercover for the Thoroughbred Racing Protective Bureau (TRPB) at the Gulfstream Park in Florida, where she works as an exercise rider. Her assignment is to watch and report back on two racetrack workers who have been suspected of illegal activities and whose horses continue to outperform all expectations, winning their owners unseemly amounts of money in the races.

To complete her cover story, Fia moves in with her semi-estranged brother, Patrick, who lives near the racetrack. Her investigations are complicated when her niece, Jilly, disappears after a shadow gang takes Jilly’s beloved horse. Now Fia must work two angles—first to find out what’s really going on with the men who might or might not be gaming the system, and second to bring the men who prey on horses to justice. Along the way, Fia encounters Cuban gangs living off the grid, a (very handsome) do-gooder who’s close on their trail, and a cabal of super wealthy gamblers who will stop at nothing to ensure they always win.


My name is Fia McKee, and I was a Baltimore City cop until that November night when I drove through West Baltimore alone. Alone, because the department requires their cops to patrol in single-man units. It’s their way of stretching the law farther into the crime-ridden city.

I eased my blue and white cruiser along the streets surrounding Lafayette Park Square, passing by St. James Episcopal Church and a stark ten-story apartment building, where a faint scent of mold soiled the night air. An odd mixture of nineteenth-century brick row houses lined the square. Disintegrating buildings with decayed walls and boarded-up windows crowded against happier homes that had been carefully restored to their former beauty.

Rolling to the corner, I hooked a right onto West Lanvale, the square’s southern perimeter. Scanning the deserted park on my right and buildings on my left, I let the Ford’s big police engine purr me toward the Methodist church at the end of the block.

Someone had shot out the sodium-vapor lamp over the alley that ran between the stone parish house and the church on the corner. I let the cruiser idle a moment. Above the slate roofs, brick chimneys, and church spires, a small slice of November moon did little to illuminate the dim alley.

A flash of white movement caught my eye.

Two people—dark faces, dark clothes—struggled in the alley against the church wall. A white scarf wrapped around the neck of … a woman? I hit my searchlight and pinned them. Yes, a woman, her fingers tearing at the fabric stretched around her throat by the hands of a large man.

The guy seemed oblivious to the sharp beam of my lamp. He must have been high on something. I radioed in my location and the assault to dispatch, then I was out of the car, running through the cold and into the alley.

I pulled my service Glock. “Police! Let her go. Now.”

The man seemed unable to see or hear anything beyond his need to destroy the woman he’d slammed against the stone wall. His lips curled in an ugly grimace. He twisted the scarf with such force the woman’s shoes lifted away from the pavement.

I shouted another warning and ran toward them. He didn’t see me, didn’t stop. The fight drained from the woman. She was going to die.

I closed in. The man saw me. His head snapped back. Just enough. I aimed for his ear and squeezed off the shot. He went down. The woman, choking, fell to her knees, then gulped air off the pavement like it was an oxygen mask.

The man lay motionless near my feet, blood pouring from the entrance hole. The woman darted a glance at me, her almond-shaped eyes devoid of emotion. Her gasping filled my ears. Then I heard a rapid, shallow panting. I recognized it as my own.

I checked the man for a pulse, not really expecting one. I felt no beat, and though he wouldn’t officially be declared deceased until he arrived at the hospital, there was no question in my mind he was already a corpse.

A shuffling movement caught my attention. The woman was trying to crawl away.

“Oh no, you don’t,” I said, grabbing her arm near her shoulder, moving around to see her face. “You have to wait for a medic. You may need to go to the hospital.”

Her hands began to shake. The fear I hadn’t seen before widened her eyes. “No! I have to leave. I can’t be involved in this.”

“Ma’am, can I see some ID please?” What was it with vics? Half the time they clung to me and the other half they tried to rabbit. If the woman had carried a purse, it was long gone, but her peacoat looked bulky enough. “Do you have a wallet? Maybe in your coat? I need to see some ID.”

She rubbed at her throat, sucked in some air, and slid a hand into her coat pocket. I leaned forward, clasped her wrist, and said, “Take it out easy, okay?”

She withdrew a wallet and when she handed it to me, her eyes had gone dead again. “I got nothing to say to you, lady cop. Nothing at all.”

With a mental sigh, I took her wallet and flipped it open. A Maryland driver’s license said she was Shyra Darnell. I was more interested in another piece of ID behind the plastic window next to the license. A permit from the Maryland Racing Commission. A hot walker’s license from Pimlico racetrack, a world from my past. A world I knew well.

Shrill sirens sounded in the distance. I stood up, looking away from the coffee-skinned woman and the dead man on the pavement. Above me, the moon floated over the church spire, as if wanting to drift to the rural land north of Baltimore, where I’d grown up. A place where the vastness of the sky and light of the stars weren’t hidden by brick, mortar, and stone. Or by the anxious, closed-in feel of this city.

The sirens drew close. The twirling flash of blue and red lights exploded into the square. I heard another squad car and saw lights where the ground swept down behind the church to the next street.

Glancing back, I stared at the man I’d shot. This probably wouldn’t go well for me.