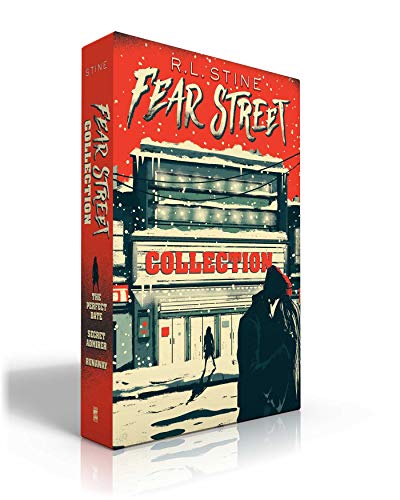 Dare to venture onto Fear Street with this spooky collection of three of the most popular books from R.L. Stine’s bestselling series—now with a fresh new look! Welcome to Fear Street... In The Perfect Date, Brady Karlin is getting on with his life. The memory of his girlfriend—killed in a gruesome sledding accident last year—is beginning to fade. Now he’s met Rosha Nelson, the girl of his dreams. And he’s never been happier. Until a strange figure with a terribly scarred face starts following him everywhere and horrible accidents start happening every time Rosha’s around. Has dating Rosha made Brady’s dreams come true? Or brought his worst nightmares back to life? In Secret Admirer, Selena has it all. She just scored the lead in her high school play, and everyone adores her. So when she starts receiving dead flowers from a secret “admirer” named The Sun, she just assumes it’s a harmless fan. But Selena soon realizes that The Sun is serious...dead serious. Selena doesn’t know what this psycho wants. All she knows is that her number-one fan has become her number-one nightmare. And in The Runaway, Shadyside sounded like such a nice town, the perfect place for a runaway like Felicia. Nobody here would know about her dark powers. Nobody would know what she had done. For once, she could be a normal girl. She could be safe. But someone in Shadyside discovered Felicia’s secret. Someone found out about the awful things her powers made her do. Felicia doesn’t want to run away again. But if she stays, she might lose control. And then people would start to die. This bone-chilling collection includes: The Perfect Date Secret Admirer The Runaway