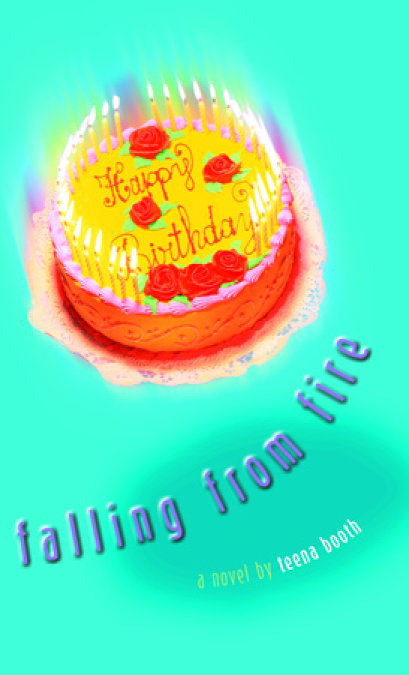 High school freshman Teri Dinsmore is a nobody. Daughter of the oft-married “Best Lookin’ Gal in Town,” younger sister of a popular member of the “rowdies,” her only real friend is the rumpled, eccentric Wesley.

Then a fire, indirectly caused by her birthday celebration, burns down her home and sends her family into a tailspin. All of a sudden Teri begins to see herself and her family in a whole new way. At school, everyone knows who Teri is, including Doug, her secret crush. Even Wesley, the most maddening person she knows, is looking at her with a new light in his eye. When her past disappears in the fire, Teri must put the pieces of her life back together, this time in a way that really fits.

I still dream about the fire. I wake and my throat feels swollen and scratched, my lungs hurt and my hair reeks of smoke. I am halfway out of bed and flailing against the blankets before I realize it's only a dream. Then I look around my new room at Gramma's and--I can't help it--I laugh.

Gramma says things always happen for a reason. (Except for Grampa dying when he slipped on the icy sidewalk and hit his head on the mailbox; she says that happened for no reason at all.) I spend a lot of time wondering why the fire happened. In my mind, I keep turning back to it and going through the whole thing again. I watch the flames shoot out of the windows toward the black sky. I feel the heat rolling from the house in waves. I feel my shock like a hard ache in my chest. I also feel the urge to elbow someone and say, Can you believe this?

I want to understand it, how it happened, how it changed everything the way it did. Sometimes I stop and wonder, what would I be doing right now if our house was still there and I was still in it? I always see myself sitting there on the peach-covered couch, staring at the TV, or making up lists of things I didn't like about myself.

My mother acts like the fire was the great tragedy of her life. She told me she still can't get through one day without crying about something she lost, something she wants back. When she says stuff like that, I turn my face away so she won't see how I feel. Then I change the subject.

Everyone says we're lucky no one died in the fire. I think it had more to do with the smoke alarm than with luck. And if it hadn't been for me, the smoke alarm might not have been working that night.

Back in sixth grade the Timberville fire chief came to our school and passed out orange Junior Fireman booklets. He said that if we did all the assignments in the book and passed a test, we could be junior members of the fire department and get real fire hats. I knew my brother, Andrew, would go nuts over the hat, so I did all the assignments in the book. I still remember that you can't put too many plugs in an outlet and that you're supposed to crawl on your hands and knees beneath the smoke. And if you catch on fire you're supposed to stop, drop and roll.

The Junior Fireman booklet also said you're supposed to hold a family meeting to talk about what to do in case of a fire. That was back when my mother was married to Bill Rickman (or as my sister, Samantha, called him, Beer Belly Bill). Bill worked the swing shift at the mill, so we had to wait to hold the meeting on his night off, which happened to be the Monday night the Raiders were playing the Broncos.

Samantha was fourteen and going through what my mother called her pissed-off stage. I remember she had just started wearing her black baseball cap, pulled low over her eyes, all day, every day, even in the house. She shoved every scrap of her blond hair under that cap so you couldn't even tell she was a girl.

That night Samantha sat on the couch with her knees to her chest, repeating, "This is so lame." Andrew was only two and he was galloping around saying, "I'm a horsey," and making snorting noises.

Samantha sighed extra loud. "This is why I missed going to the movies with Maxie?"

"Oh, hush," said Mom. She was sitting next to Bill, on the arm of his recliner, and her bracelets jangled as she smoothed the blond wave of her hair back into its curve against her cheek. "We all have things to do, Teresa, so let's get the show on the road."

I pushed myself up and walked on my knees to the coffee table to spread out the diagram I'd drawn of the house. "Okay. In case of a fire we all have to know the nearest exit and an alternate exit."

Samantha rolled her eyes. "You just go out the window, genius."

"Sounds like a plan," said Bill. He raised his can of Budweiser as if to toast such brilliance, then picked up the remote control and switched on the game.

My mother snatched the remote away and clicked off the TV. "Can't you leave it off for five minutes?"

"Look," I said, pointing to the diagram. "The front door is the nearest exit to the bedrooms. The back door is the alternate exit. And we're supposed to pick a spot to meet outside so we know we all made it out."

Bill scratched his beard, then reached for the remote. Mom cried, "God!" and wrenched the remote away. "I'm going to throw this thing away, I swear it!"

"Hey!" Bill yelled back. "I get one lousy night off a week. I can spend it any way I want."

"Stop, drop and roll!" Andrew shouted, and rolled into the dining room table so hard that he toppled a bowl of cereal left over from that morning. The bowl landed on him and he rose up, shrieking, his dark hair covered with soggy Cheerios and spoiled milk.

Mom ran to help him, Bill turned on the TV again and that was the end of the meeting. Later, Mom signed the assignment page in my Junior Fireman book anyway, so Andrew got his fire hat.

For the next two weeks I sniffed around the house like a fire station dog, looking for hazards. I even got up the nerve to ask Bill to check the battery in the smoke detector, but Mom kicked him out before he got around to it.

I didn't run across the fire hat again until a year later, when Mom was about to marry Lenny Brungard (who Samantha dubbed Skinny Lenny) and I was looking for my white sandals for the wedding. Andrew wore the hat to the wedding rehearsal at the park, and when we got home, I went around the house looking for worn cords running under the carpets. I also asked Lenny to change the battery in the smoke detector. That was when he still cared if us kids liked him or not, so he grabbed a chair and a screwdriver and took the cover off the smoke detector while I stood beside him, ripping the plastic off the new battery.