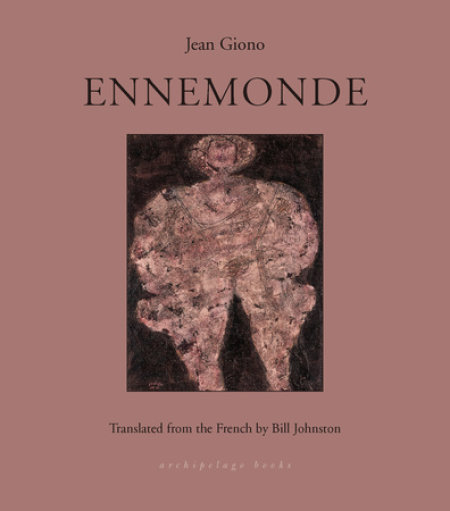 One of the final novellas by the acclaimed French writer Jean Giono, Ennemonde is a fierce and jubilant portrait of a life intensely lived

Ennemonde Girard: Obese. Toothless. Razor-sharp. Loving mother and murderous wife: a character like none other in literature. In telling us Ennemonde’s astounding story of undetected crimes, Jean Giono immerses us in the perverse and often lurid lifeways of the people of the High Country, where vengeance is an art form, hearts are superfluous, and only boldness and cunning such as Ennemonde’s can win the day. A gleeful, broad sardonic grin of a novel.

"Roads move cautiously around the High Country..." So begins the story of Ennemonde, but also of her sons, daughters, neighbors, lovers, and enemies, and especially of the mountains that stand guard behind their home in the Camargue. This is a place of stark and terrifying beauty, where violence strikes suddenly, whether from the hand of a neighbor or from the sky itself.

Giono captures every wrinkle, glare, and glance with wry delight, celebrating the uniquely tough people whose eyes sparkle with the cruel majesty of the landscape. Full of delectable detours and startling insights, Ennemonde will take you by the hand for an unforgettable tour of this master novelist's singular world.

Journeys are not undertaken
lightly in the High Country. Farms may be five or ten miles
from their nearest neighbor. Often it would be one solitary man
traveling those miles to see another solitary man; he never does
this even once in his life. Or else it’d be a whole tribe of adults,
children, and old people setting off toward another whole tribe
of adults, children, old people – to see what? Women demolished
by repeated pregnancies, red-faced
men, and crooked old folks
(and children too) – only to be looked down on by them? The
hell with that. If anyone wants to show themselves, they’ll do it at
the markets. Twenty, twenty-five
miles separate the villages that
neatly line the circuit formed by the road.
In the surrounding country there are beech trees, chestnuts,
sessile oaks – beeches that grow more massive the farther out
you go, sessiles that are ever more ancient; far removed from any
dealings with men, there are families of birches that are lovely
in summer and that disappear, white against white, in the snow.
On the moors there’s lavender, broom, esparto, sedge, dandelion,
and then rocks, rounded rocks, as if long ago, up in these
heights, great rivers used to pass through; then finally, in the
great open spaces are flat rocks, resonant as bells, that repeat the
slightest sound – the hop of a cricket, the patter of a mouse, the
slithering of an adder, or the wind glancing off these terrestrial
springboards.
The sky is often black, or at least dark blue, though giving the
impression black would give – except during the blooming of
the wild mignonette, whose exquisite scent is so joyful it dispels
all melancholy. The time of the mignonette aside, fine weather
is not cheerful in these parts; nor is it sad, it’s something else;
those who find it to their liking can no longer do without it. Bad
weather is thoroughly seductive too, immediately assuming as it
does a cosmic air. There’s something galactic, extra-galactic
even,
in the way it behaves. It cannot rain here the way it does elsewhere
– you sense that God personally sees to it; here the wind
matter-of-factly
takes the fate of the world in hand. The storm

adapts its ways here: it doesn’t flash, doesn’t make any noise; simply,
metallic objects begin to gleam – belt buckles, lace hooks onshoes, clasps, eyeglasses, bracelets, rings, chains. . . ; you have to
mind how you go. You often find twenty, even thirty magnificent
beeches struck by lightning all in a row, dead from head to foot,
burned to a cinder, upright, black, bearing witness to the fact
that things happen in that silence.
Dusk is more often green than red, and goes on for a very
long time – so long that in the end you can’t help noticing that
night has fallen and that now the light is coming from the stars.
In these parts the stars light your way; they’re bright enough for
people to recognize each other when their paths cross. It may be
that you see more stars here than elsewhere; in any case, they’re
certainly larger, for there’s something about the air – whether
its purity, which is exceptional, renders the constellations more
vivid or whether, as some claim, it contains some substance
that acts like a magnifying glass. Naturally, no one’s going to
boast about having been way out in the open in the depths of
night. Whenever they see it coming on, people skedaddle home
before it arrives. There’s a way of behaving toward this land that
was perfected by our ancestors and that has produced excellent
results; indeed, it’s the only way: you shape yourself to it. Every
accident that’s been seen to happen here – and they’re countless
in number, including many that are strange indeed – comes from
some infringement of these sorts of rules or laws.
There’s nothing more straightforward for example than going
from Villesèche to the Pas de Redortier in daylight; it’ll take you
an hour at most. The landscape isn’t exactly cheerful, but it’s
doable; all it needs is a bit of will, or passion (if it’s for hunting),
or foolishness (if it’s for no reason). But on a day when the
clouds are low and dense, and night falls, try then! No one will
chance it.
The tool that people around here have most often in their
hand is a shotgun, whether it’s for hunting or for, let’s say, philosophical
reflection; in either case, there’s no solution without
a shot being fired. The gun hangs from the stem of a wineglass
that’s been embedded in the wall near the chair where the man
of the house sits. Whether this chair is at the table or by the
fireplace, the shotgun is always within arm’s reach. It’s not that
the region is unsafe because of a lack of police; on the contrary,
even in the heyday of banditry there was never any crime up
here, except for one incident in 1928, and that one was precisely
about what everyone is afraid of. Everyone is afraid of loneliness.
Families are no solution: at most they’re collections of lonesome
people who in reality are each heading in their own direction.
Families don’t come together around someone; they separate as
they move away from someone. Then there’s metaphysics – and
not the Sorbonne kind, rather the sort you have to bear in mind
in confronting irredeemable solitude and the outside world.
Monsieur Sartre would not be of much use here; a shotgun, on
the other hand, comes in handy in many situations.
It might seem surprising that these peasants don’t grasp the
handles of a plow. The reason is that the peasants are shepherds.
That’s also what keeps them beyond (and above) technological
progress. No one has yet invented a machine for minding
sheep. The father, head of the family, oversees the flock; the son
or sons are in charge of the small farm that in fact functions as a
closed economy. People only till the acreage necessary for enough
wheat, barley, potatoes, and vegetables to meet the needs of the
family or the individual, and that is why so many of the peasants
remain unmarried, living alone: in this way they have need of so
little that they spend no more than one month a year scraping
the earth.