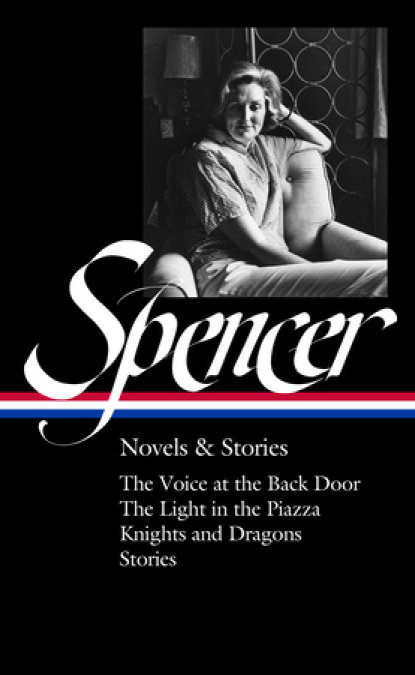 On her centennial, a contemporary of Flannery O’Connor and Harper Lee joins the Library of America with a volume that restores to print her searing novel about the late Jim Crow South


Elizabeth Spencer (1921-2019) was a major figure of the Southern Renaissance, though today her many books and stories are scattered or out of print. This Library of America volume brings together the very best of her writing--three novels and nineteen stories--from a career spanning more than six decades.

The Voice at the Back Door (1957), greeted by The New Yorker as "a practically perfect novel" and here restored to print, portrays small-town life in Mississippi during the late Jim Crow era and the self-interest and hatred that kept injustice firmly in place. Published two years after the Emmett Till lynching, it captures the spitting vehemence of its white characters' speech and may have been proven too potentially controversial for the Pulitzer board (which awarded no prize in 1957). Also included in this volume are The Light in the Piazza (1960), Spencer's most famous work, a deftly poignant comedy about Americans abroad that was adapted to the screen by Guy Green; and a second superb Italian novella, Knights and Dragons (1965), reminiscent of Henry James's novels in its atmosphere, interiority, and concern with transplanted Americans.

Spencer excelled in the short story form and this volume presents a career-spanning selection by editor Michael Gorra that ranges from the early "First Dark" (1959), a kind of ghost story about a spectral oversized house in a Southern town, to the valedictory "The Wedding Visitor" (2013), about the refusal to let the all-enveloping world of place, family, and childhood define one's adult life. Spencer's special focus was families, and few writers have so brilliantly plumbed the passions that unite them and the inner upheavals that can tear them apart.

The Voice at the Back Door

Far into the early winter twilight Duncan Harper remained in the store and the store was full of people. They wanted to hear all the details of the death. For a while they talked in low tones, but gradually they spoke louder and, toward the last, one or two had cracked a joke and there had been a little scuffling, quickly dropped not so much out of propriety as because their hearts were heavy. When a silence fell, they left the store altogether, as though a program had concluded. . . .
On a hill just at the outskirts of town, a Negro woman was sitting in a rocking chair on the front porch of her house. She was dressed in her best silk dress, the dark one she wore to church. Her hands, resting in her comfortable lap, held a handkerchief and a folded fan. She was Ida Belle, for fifteen years Travis Brevard’s Negro woman. All around her front porch and the steps, other Negroes were gathered; they talked a little in low voices, or lounged silently against the porch, staring outward toward the town. Bone-white grass fringed the gullies, and in the clean winter leaflessness the white houses, the courthouse and church steeples and Confederate statue appeared to be quite close, both to one another and to the hill. Ida Belle would not go to the funeral, though she would dress for it as she had dressed today and would sit on the porch in the rocker. The other Negroes, all dressed too, would bank against the porch and fill the yard. . . .
Down in the town, in one of the larger white houses, Miss Ada, Travis’s wife, lay on the bed in a darkened room. A cold compress covered her eyes and the single light bulb which burned near the dresser had been shaded with a newspaper. Two Negro girls stood one on either side, fanning her. Her cries had been silenced by hypodermic: word went out that she was “resting easier.” Food had begun to arrive twenty minutes after Travis fell; there was enough of it now to last for a month. Two ladies, working hard, entered the back hallway from opposite doors. One was carrying a newspaper full of damp fern, the other a pitcher of ice.
“Hot,” said the first, and pressed a sodden handkerchief to her upper lip. “It would be hot.”
“And me with four to feed when I get home,” said the second, pushing back a wisp of hair.
“Why don’t you just go home now, honey? I can manage here.”
“I wouldn’t dream of it! Leave poor Ada? Not for anything in the world!”
“Poor Ada!”
“Poor thing!”
Raising their eyes to heaven, they parted and swept to their imperious labor with a sigh. For women bear the brunt of everything, always. . . .