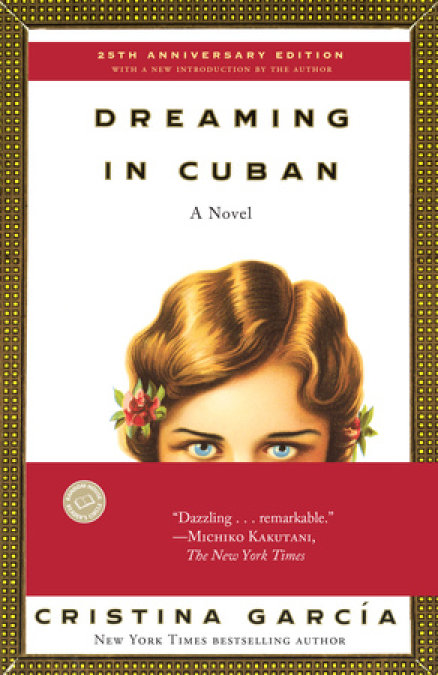 “Impressive . . . [Cristina García’s] story is about three generations of Cuban women and their separate responses to the revolution. Her special feat is to tell it in a style as warm and gentle as the ‘sustaining aromas of vanilla and almond,’ as rhythmic as the music of Beny Moré.”—Time

Cristina García’s acclaimed book is the haunting, bittersweet story of a family experiencing a country’s revolution and the revelations that follow. The lives of Celia del Pino and her husband, daughters, and grandchildren mirror the magical realism of Cuba itself, a landscape of beauty and poverty, idealism and corruption. Dreaming in Cuban is “a work that possesses both the intimacy of a Chekov story and the hallucinatory magic of a novel by Gabriel García Márquez” (The New York Times). In celebration of the twenty-fifth anniversary of the novel’s original publication, this edition features a new introduction by the author.

Praise for Dreaming in Cuban

“Remarkable . . . an intricate weaving of dramatic events with the supernatural and the cosmic . . . evocative and lush.”—San Francisco Chronicle

“Captures the pain, the distance, the frustrations and the dreams of these family dramas with a vivid, poetic prose.”—The Washington Post

“Brilliant . . . With tremendous skill, passion and humor, García just may have written the definitive story of Cuban exiles and some of those they left behind.”—The Denver Post 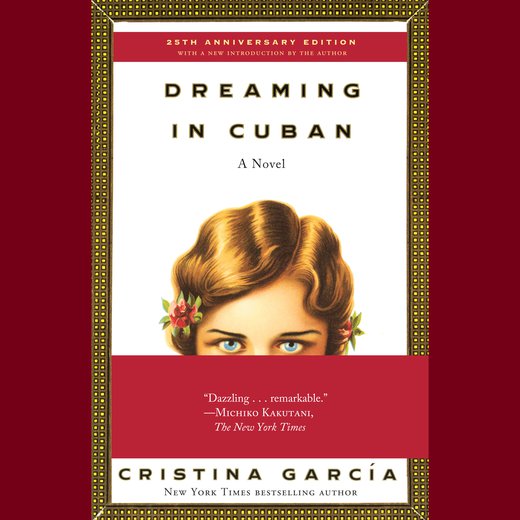 Celia del Pino, equipped with binoculars and wearing her best housedress and drop pearl earrings, sits in her wicker swing guarding the north coast of Cuba. Square by square, she searches the night skies for adversaries then scrutinizes the ocean, which is roiling with nine straight days of unseasonable April rains. No sign of gusano traitors. Celia is honored. The neighborhood committee has voted her little brick-and-cement house by the sea as the primary lookout for Santa Teresa del Mar. From her porch, Celia could spot another Bay of Pigs invasion before it happened. She would be feted at the palace, serenaded by a brass orchestra, seduced by El Líder himself on a red velvet divan.

Celia brings the binoculars to rest in her lap and rubs her eyes with stiffened fingers. Her wattled chin trembles. Her eyes smart from the sweetness of the gardenia tree and the salt of the sea. In an hour or two, the fishermen will return, nets empty. The yanquis, rumors go, have ringed the island with nuclear poison, hoping to starve the people and incite a counterrevolution. They will drop germ bombs to wither the sugarcane fields, blacken the rivers, blind horses and pigs. Celia studies the coconut palms lining the beach. Could they be blinking signals to an invisible enemy?

A radio announcer barks fresh conjectures about a possible attack and plays a special recorded message from El Líder: “Eleven years ago tonight, compañeros, you defended our country against American aggressors. Now each and every one of you must guard our future again. Without your support, compañeros, without your sacrifices, there can be no revolution.”

Celia reaches into her straw handbag for more red lipstick, then darkens the mole on her left cheek with a black eyebrow pencil. Her sticky graying hair is tied in a chignon at her neck. Celia played the piano once and still exercises her hands, unconsciously stretching them two notes beyond an octave. She wears leather pumps with her bright housedress.

Her grandson appears in the doorway, his pajama top twisted off his shoulders, his eyes vacant with sleep. Celia carries Ivanito past the sofa draped with a faded mantilla, past the water-bleached walnut piano, past the dining-room table pockmarked with ancient history. Only seven chairs remain of the set. Her husband smashed one on the back of Hugo Villaverde, their former son-in-law, and could not repair it for all the splinters. She nestles her grandson beneath a frayed blanket on her bed and kisses his eyes closed.

Celia returns to her post and adjusts the binoculars. The sides of her breasts ache under her arms. There are three fishing boats in the distance—the Niña, the Pinta, and the Santa María. She remembers the singsong way she used to recite their names. Celia moves the binoculars in an arc from left to right, the way she was trained, and then straight across the horizon.

At the far end of the sky, where daylight begins, a dense radiance like a shooting star breaks forth. It weakens as it advances, as its outline takes shape in the ether. Her husband emerges from the light and comes toward her, taller than the palms, walking on water in his white summer suit and Panama hat. He is in no hurry. Celia half expects him to pull pink tea roses from behind his back as he used to when he returned from his trips to distant provinces. Or to offer her a giant eggbeater wrapped in brown paper, she doesn’t know why. But he comes empty-handed.

He stops at the ocean’s edge, smiles almost shyly, as if he fears disturbing her, and stretches out a colossal hand. His blue eyes are like lasers in the night. The beams bounce off his fingernails, five hard blue shields. They scan the beach, illuminating shells and sleeping gulls, then focus on her. The porch turns blue, ultraviolet. Her hands, too, are blue. Celia squints through the light, which dulls her eyesight and blurs the palms on the shore.

Her husband moves his mouth carefully but she cannot read his immense lips. His jaw churns and swells with each word, faster, until Celia feels the warm breeze of his breath on her face. Then he disappears.

Celia runs to the beach in her good leather pumps. There is a trace of tobacco in the air. “Jorge, I couldn’t hear you. I couldn’t hear you.” She paces the shore, her arms crossed over her breasts. Her shoes leave delicate exclamation points in the wet sand.

Celia fingers the sheet of onion parchment in her pocket, reads the words again, one by one, like a blind woman. Jorge’s letter arrived that morning, as if his prescience extended even to the irregular postal service between the United States and Cuba. Celia is astonished by the words, by the disquieting ardor of her husband’s last letters. They seemed written by a younger, more passionate Jorge, a man she never knew well. But his handwriting, an ornate script he learned in another century, revealed his decay. When he wrote this last missive, Jorge must have known he would die before she received it.

A long time ago, it seems to her, Jorge boarded the plane for New York, sick and shrunken in an ancient wheelchair. “Butchers and veterinarians!” he shouted as they pushed him up the plank. “That’s what Cuba is now!” Her Jorge did not resemble the huge, buoyant man on the ocean, the gentleman with silent words she could not understand.

Celia grieves for her husband, not for his death, not yet, but for his mixed-up allegiances.

For many years before the revolution, Jorge had traveled five weeks out of six, selling electric brooms and portable fans for an American firm. He’d wanted to be a model Cuban, to prove to his gringo boss that they were cut from the same cloth. Jorge wore his suit on the hottest days of the year, even in remote villages where the people thought he was crazy. He put on his boater with its wide black band before a mirror, to keep the angle shy of jaunty.

Celia cannot decide which is worse, separation or death. Separation is familiar, too familiar, but Celia is uncertain she can reconcile it with permanence. Who could have predicted her life? What unknown covenants led her ultimately to this beach and this hour and this solitude?
She considers the vagaries of sports, the happenstance of El Líder, a star pitcher in his youth, narrowly missing a baseball career in America. His wicked curveball attracted the major-league scouts, and the Washington Senators were interested in signing him but changed their minds. Frustrated, El Líder went home, rested his pitching arm, and started a revolution in the mountains.

Pilar, her first grandchild, writes to her from Brooklyn in a Spanish that is no longer hers. She speaks the hard-edged lexicon of bygone tourists itchy to throw dice on green felt or asphalt. Pilar’s eyes, Celia fears, are no longer used to the compacted light of the tropics, where a morning hour can fill a month of days in the north, which receives only careless sheddings from the sun. She imagines her granddaughter pale, gliding through paleness, malnourished and cold without the food of scarlets and greens.

Celia knows that Pilar wears overalls like a farmhand and paints canvases with knots and whorls of red that resemble nothing at all. She knows that Pilar keeps a diary in the lining of her winter coat, hidden from her mother’s scouring eyes. In it, Pilar records everything. This pleases Celia. She closes her eyes and speaks to her granddaughter, imagines her words as slivers of light piercing the murky night.