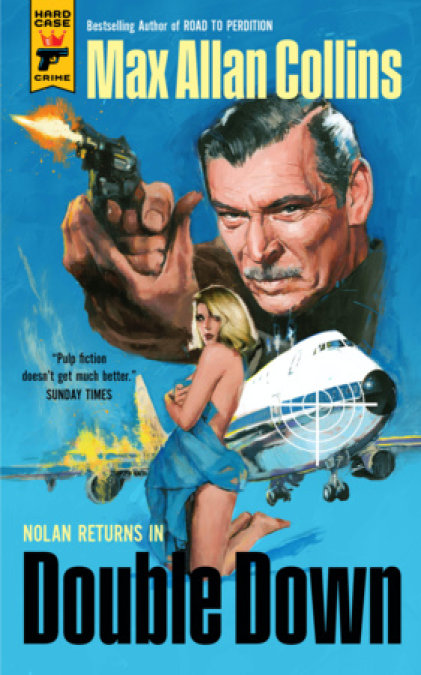 Veteran thief Nolan tangles with a skyjacker and vigilante in two full-length novels from Grandmaster Max Allan Collins (Road to Perdition), collected in one volume for the first time ever.

It Takes a Thief to Take a Thief.

In the aftermath of a bloody heist, Nolan and Jon find themselves flying home to count their ill-gotten gains -- but a skyjacker taking the same flight has other plans. Meanwhile, in Des Moines, someone is offing members of the Mob-connected DiPreta family and the Mob thinks maybe Nolan can make it stop. Maybe he can -- for a six-figure fee.

Originally published as two separate novels (and unavailable in bookstores for 40 years!), DOUBLE DOWN finds Nolan and Jon pursuing the American dream in their inimitable criminal fashion. Flying high off his recent return after more than three decades in SKIM DEEP, Nolan is one of MWA Grand Master Max Allan Collins' most unforgettable characters, and DOUBLE DOWN is Nolan at his hard-boiled, larcenous best.