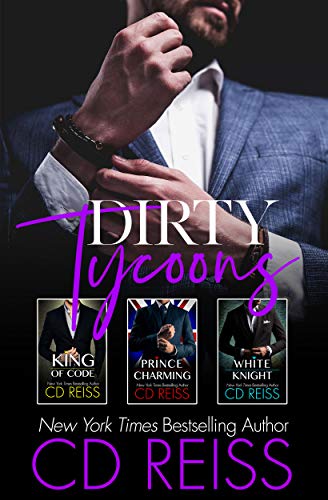 Possessive. Passionate. Powerful. Three commanding men and the women who tame them in three, full length standalone novels. Fall in love with Dirty Tycoons and this preorder special!
KING OF CODE
Taylor Harden's on the edge of fame and untold wealth, until a hacker freezes his company and holds it hostage.
Life as he know it is ruined unless he find out what he wants...or what she wants.
Harper doesn't want much from Taylor.
All he has to do to get his company back is teach her how to please a man.
Step by step, and for every step she'll unlock a piece of his system.
They hate each other. They can't keep away from each other. They're decoding each other with every step, until all Harper's secrets are revealed, and Taylor risks losing his heart as well as his dreams.

PRINCE CHARMING
Keaton Bridge is 100 percent bad boy.
Cassie doesn't need a boy and certainly not a bad one. Nope. She fights crime for a living, and everything about this guy screams trouble, from his charming British accent to his mysterious past. And Cassie doesn't do trouble.
Keaton's got his own trouble. He's trying to disappear, but all it took was one night of passion to sear Cassie into his skin. Now he can't imagine living happily ever after without her.
All they have to do is walk away. But neither of them ever walks away from a challenge.

WHITE KNIGHT
Catherine Barrington was a rich girl. Chris Cartwright was a poor boy.
He left her to make something of himself. A man she could be proud of. A man she could bring home to her parents. A man she could marry.
On the trading floor he became the man he knew he could be. Now, it's time to return.
Rich girl.
Poor boy.
She didn't care about his money, but he didn't believe her. Soon after he left, all the money was gone.
Her life is hell.
Now he's back, and he's different. Pristine. Gorgeous. Rich.
Rich boy.
Poor girl.
Money was never the barrier, until now.
-----
Three full length, standalone romances with hot, passionate, possessive men and the women who tame them.