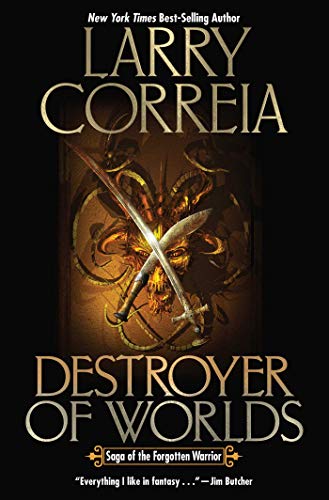 IF IT'S WAR YOU WANT . . . The best of military epic fantasy as the best-selling Saga of the Forgotten Warrior series continues. The Great Extermination has begun. In the Capitol, Grand Inquisitor Omand Vokkan hatches a plot to kill every member of the untouchable caste in all of Lok, down to the last man, woman, and child. As a member of the Order of Inquisition, Vokkan has no official say in the creation of Law, but he has powerful allies willing to do his bidding. Through them, he has convinced the Judges that the genocide will be swift, complete, and without complication. Nothing is further from the truth. Lord Protector Devedas has sworn to uphold the Law. Once, he and the traitor Ashok Vadal had been like brothers. Now, he hunts Vadal and the Sons of the Black Sword, heretics and rebels who seek to live outside the rule of the Law. All Devedas must do is find and kill his best friend and order will be restored to Lok. The rebels seek the secret kingdom spoken of by the Prophet Thera, a paradise where water is pure and food plentiful, where there are no castes, where the people rule themselves, and are not slaves to the Capitol. Ashok Vadal is not sure he believes in such a paradise, but he—along with his allies—do seek refuge in the rebellion’s hideout in Akershan. But Vadal, a former High Protector who has turned his back on the corrupt Law, will not merely wait meekly, hoping that fleeing to Akershan will spare the rebellion from the clutches of the Great Extermination. No, if it’s a war the Capitol wants, Vadal, who has faced down gods and demons, will be all too willing to give it to them. A bout Destroyer of Worlds : “The inevitable fight scenes are just as epic as fans expect. Packed with action, grit, and Ashok’s own grim sarcasm, Correia’s latest is sure to satisfy.”— Publishers Weekly About House of Assassins : “Correia piles on the intrigue, action, and cliffhangers in the invigorating second Saga of the Forgotten Warrior epic fantasy. . . . Correia also weaves in elements that question the value of belief and the cost of giving authority to those who find more profit in preying on the weak. . . . Brisk fight scenes, lively characters, and plenty of black humor continue to make this series a real pleasure.”— Publishers Weekly About prequel Son of the Black Sword: “This book has everything I like in fantasy: intense action scenes, evil in horrifying array, good struggling against the darkness, and most of all people—gorgeously flawed human beings faced with horrible moral choices that force them to question and change and grow.”—Jim Butcher, creator of the New York Times best-selling Dresden Files “Best-selling fantasy author Correia casts a compelling spell with this India-influenced series opener. . . . Correia skillfully sets in motion this story of plots within plots, revealing complex, sympathetic characters and black-hearted villains with equal detail and insight. Full of action, intrigue, and wry humor, this exciting series launch promises many more thrills to come.”— Publishers Weekly (starred review) “Fans who like Correia’s fast-moving style will be pleased with the plethora of action scenes, and epic fantasy readers interested in delving into a new universe should be equally satisfied.  A solid choice for admirers of Brent Weeks and Brandon Sanderson’s Mistborn series.”— Library Journal “Correia is, above all, a storyteller, and he weaves a unique and entertaining tale. Without question, his action sequences pop on the page, his magic system has a nice wrinkle, and he has the foundations laid out for some excellent character growth as the series continues. . . . [A] definite hit.”— Bookreporter “The lore here is fascinating and well told. I enjoyed learning the history of the world and the legend of Ramrowan. The politics are just complicated enough to feel real without being too difficult to follow. Where the book truly shines, however, is in the characters. All are well drawn and distinctively voiced.”— SFCrowsnest “I loved the book, it was great, fast paced, with wonderful characters, and also a lot of wonderful scenes that screamed to be painted.”—Larry Elmore, legendary, award-winning artist, and cover artist for Son of the Black Sword. “ Son of the Black Sword: Saga of the Forgotten Warri or tells of what happens after the war with the gods, when demons were cast out and fell to the world to nearly destroy these unstoppable beasts until the gods sent a hero to save them. Centuries have passed since this event and the people have regulated these events to legend. One Ashok has been chosen to be a protector with a powerful weapon in hand, uncovering those who still practice old ways and are potential dangers to the order—but when he discovers all his efforts have been based on a lie, everything's about to change. A powerful epic fantasy evolves into a solid, compelling read.”— Midwest Book Review About the Urban Fantasy of Larry Corre ia: “[A] no-holds-barred all-out page turner that is part science fiction, part horror, and an absolute blast to read.”— Bookreporter.com “A gun person who likes science fiction—or, heck, anyone who likes science fiction—will enjoy [these books]. . . The plotting is excellent, and Correia makes you care about the characters…I read both books without putting them down except for work . . . so whaddaya waitin’ for? Go and buy some . . . for yourself and for stocking stuffers.”—Massad Ayoob “This lighthearted, testosterone-soaked sequel to 2009's Monster Hunter International will delight fans of action horror with elaborate weaponry, hand-to-hand combat, disgusting monsters, and an endless stream of blood and body parts.”— Publishers Weekly on Monster Hunter Vendetta