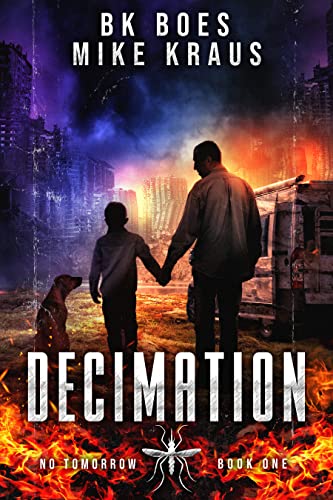 A mysterious illness. An unfathomable death toll. A father who will stop at nothing to save his son.

Tired of the usual post-apocalyptic story? Welcome to your new addiction.

The St. Louis World’s Fair becomes ground zero for a devastating illness that spreads like wildfire - and kills without mercy.

As the threat grows, more reports come in from across the globe of thousands dying by the moment as society is thrown into chaos.

As planes fall from the sky and the city is engulfed in flames, CDC scientist Alex Roman must escape the chaos with his son before it’s too late, all while struggling to understand a terrifying new threat to humanity itself.

No Tomorrow is a 6-book post-apocalyptic survival thriller series from Muonic Press, which has published hit best-sellers like Epoch’s End, MELT, Fracture, Extinction and more, with Mike Kraus, Justin Bell, Tara Ellis, Kenny Soward and more. With a deep emphasis on characters and real-world science, this post-apoc tale will keep you reading well into the night.