(This book was previously published with a different cover and the title "Blood Hunger".)

Nikulas finally has a new lead on his brother's disappearance, a feisty witch named Emma Moss. The problem? Emma is smart and courageous and her scent is impossible to resist. And that scares the hell out of him. Emma deserves more than an eternity with a vampire, but the moment he tastes her blood, Nik knows it's too late. Her life is now linked to his.

Emma still has nightmares about the night her sister was kidnapped—the scars she bears all over her body a constant reminder of what happened—but she hasn't given up hope. So, when a seductive stranger calls claiming to have a new lead, she doesn't hesitate to go meet him. With his teasing manner and pretty-boy looks, Nikulas seemed harmless enough for a vampire. But Emma could sense the predator beneath...

Bound together by their shared cause, tormented by their fated attraction, they set out to find their siblings.
He needs her to survive. But can Nikulas save her from the one thing that may ultimately destroy her—himself.

The witch is MINE.

Nikulas pushed himself off the ground and rose to his full height. He rolled his head on his shoulders, then looked toward the house he’d been watching.

Or rather, the female inside the house—Emma Moss.

He’d been here every night for the past week, watching, waiting, learning her habits and her routine, hoping to pick up on something that would confirm his suspicions.

So far he’d learned…absolutely nothing. Except she worked too much and seemed to be a vegetarian.

This was the first time he’d spent the entire night there, though. Usually he’d find a good vantage point in one of the trees surrounding her place right after sunset—about seven or eight at night—and he’d hang out until she went to bed around eleven. There was nothing much to see after that.

As far as he could tell, Emma was a loner. She had no family. No friends. She didn’t even have a pet.

And wasn’t that interesting in and of itself.

In spite of the fact he’d learned nothing to support what he knew about her, he didn’t consider the past week a complete waste of time. Mainly because Emma Moss was fucking hot. Boring…but hot.

Even from halfway down her driveway hiding under a canopy of trees, he could see her well enough to know the female had been blessed with some good genes. Her body was lean and petite, and her face—framed by shoulder-length hair of some light, indecisive color…blond, maybe—could be on the cover of a magazine.

He’d love to be able to see that hair in the sunlight…run his fingers through it…lift it to his nose. He’d bet she smelled great with all the showers she took. One every night as soon as she came home, and probably again in the morning. She seemed to be the type.

Nik had just decided it was time to leave when he saw her bedroom light come on. Curious as to what her morning routine was, he leaned back against his favorite tree, crossed his muscular arms over his hard chest, and prepared to watch the show. His eyes followed the light trail as she made her way downstairs in the god-awful robe she always wore and walked into the kitchen and out of sight.

He waited where he was, thinking she wouldn’t be there long. Probably just getting a drink.

Yup, there she goes, back upstairs, glass of water in hand.

He grinned widely, proud of himself that he’d guessed correctly, but between one second and the next, his smile turned into a scowl.

Man, I need to get a fucking life.

Emma walked across the bedroom and into her bathroom. A few minutes passed, then the lights turned off one by one as she made her way downstairs annnd…out the front door.

Nik shoved away from the tree. Shit! He needed to hightail it out of there, he wasn’t ready to be seen. Besides, it was way too close to dawn. Still safe for him to be out, but just barely. He really needed to go.

Instead, he pulled his hood up to cover his light hair and silently moved to a more concealed vantage point behind the tree.

He watched as she strode across the porch to the top of the steps and stretched, grabbing her feet behind her—first one, then the other. Nik’s eyebrows lifted when she bent over to touch her toes, giving him a full view of her ass. A pose that brought an interested lift to other parts of him, as well. She shook out her arms and legs, put her ear buds in, and headed his way at an easy jog.

As she came closer and closer, Nikulas became as still as the trees around him. Standing in the pre-dawn shadows of a large maple, he watched, mesmerized, as the most stunning creature he’d ever seen passed within mere feet of him, completely unaware of his presence.

His lungs began to ache as she jogged by, reminding him to breathe, and he sucked in a big gulp of air. A second later, he wished he hadn’t done that.

Her luscious scent hit him hard, and his body responded instantly, gums burning as his fangs elongated. Saliva filled his mouth and his muscles hardened in preparation to hunt. To feed.

He’d spent the past week watching her from afar through the windows of her house, but nothing had prepared him for the sight, and smell, of her up close and personal.

His eyes followed her with an interest bordering on obsession. She moved with the easy grace born to a natural runner. Her…oh yeah…strawberry-blond ponytail bounced in the breeze, and her flawless, alabaster skin was just starting to flush a bit from the wind and exertion. He watched her cute little backside—in those tight running pants—bounce by him and out to the end of her driveway, where she turned right and headed down the rural road.

He scrubbed a hand over his mouth as he watched her.

The burning of the sun’s rays as it peeked over the horizon rapidly cooled his ardor, and Nik took off to head back to the tricked-out RV, about two miles from Emma’s house, where he and Aiden—Guardian of Nik, Hunter, best buddy, tech wizard, and all around badass vampire—were holed up.

They’d found a clearing in a secluded area of the woods to park their pimped out mobile unit. It had started out as a Fleetwood Pace Arrow, which was worked over to include things like steel shutters over the windows, technology out the ass, weapon caches, and a souped-up engine (think Meet The Fockers).

Luckily for him, vampires were blessed with supernatural speed. He laughed out loud as he raced the fiery rays of the sun, feeling high off the adrenaline flooding his system and the close call with Emma. Nik barreled through the RV door like a SWAT officer, seconds away from turning into a bonfire and grinning like an idiot.

Aiden swung his chair around from the security monitors and watched, unperturbed, as his friend frantically slapped at the smoking areas of exposed skin on his arms and face.

“One of these days, mate, you’re going to cut it too bloody close. And I’m the one who’ll be chasing your ashes all over these bloody woods come nightfall, trying to collect enough to have a decent funeral. I will give you a brilliant elegy, and finish it just in time for Luukas to throw me into the sun for not doing my job of protecting you.” Aiden squinted his eyes at his friend of over 300 years. “What’s with the grin?”

Nik pushed his blonde hair out of his face. “Today is the day, my friend…or night rather. I’ll call Emma at work and have her meet me after dark, somewhere public…that little bar down the road, maybe…and get her on our side.”

“Do you know how you’re going to manage that?” Aiden asked.

“You doubt my skills of persuasion, Aid? After all the years you’ve known me?” Nik scoffed. “Besides, how could she resist this handsome face?” He gave him his best roguish grin.

“You’re sure she’s the right girl? I would hate to kidnap the wrong one.”

Nik stared at him. He had to be joking.

“Alright, I’d hate to kidnap the wrong one this time. And besides, those other times weren’t really kidnappings, they were just weekend dalliances of mutual consent…for the most part.”

Nik rolled his eyes and shook his head. This was a conversation for another day. Another day a long time from now. Like, never.

“It’s her. I’m sure of it. There’s no way she knows anything, though. She’s totally clueless. As far as I can see, Emma Moss doesn’t know who, or what, she is.”

Aiden unfolded his six-foot one-inch frame from his chair and stretched his arms over his head. His shirt rode up, exposing a strip of flat, muscular stomach. “You really think she’s unaware she’s a witch? How can she not know?” He yanked his shirt down and pressed a button on the console that locked down the RV for the day. “How does she explain all of the unexplainable in her life? The premonitions? Things moving around on their own and such?”

Nik shook his head. “I’ve been watching her all week, man, and I’m telling you, she’s completely clueless. She has no idea what she’s capable of.”

Aiden nodded, a thoughtful look on his face. “Well, that would explain why she hasn’t gone after her sister, yet. I’ll ring up the guys and tell them to prepare.” Aiden turned back to grab his cell. “And then you and I need to get some rest, mate. I don’t know about you, but I’m bloody knackered. And we’ve a busy next few days ahead of us.” 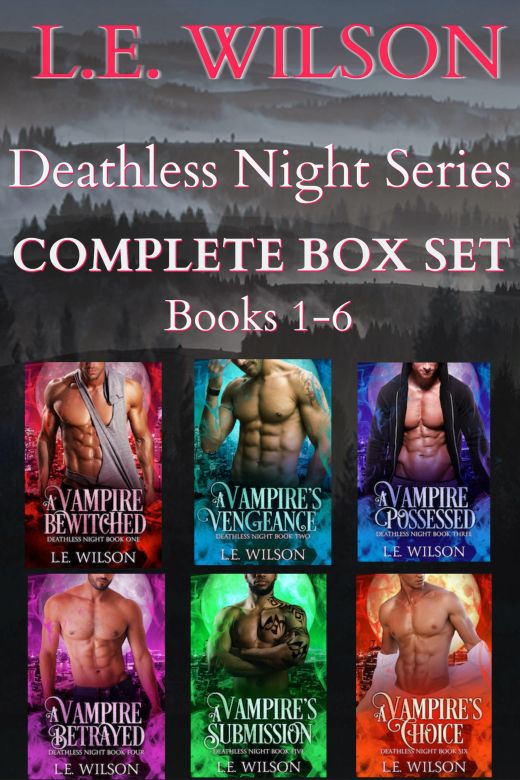