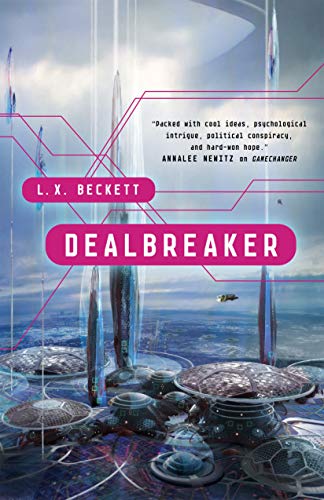 L. X. Beckett's Dealbreaker is the thrilling sci-fi sequel to Gamechanger, perfect for fans of Neuromancer and Star Trek

Rubi Whiting has done the impossible. She has proved that humanity deserves a seat at the galactic table. Well, at least a shot at a seat. Having convinced the galactic governing body that mankind deserves a chance at fixing their own problems, Rubi has done her part to launch the planet into a new golden age of scientific discovery and technological revolution.

However, there are still those in the galactic community that think that humanity is too poisonous, too greedy, to be allowed in, and they will stop at nothing to sabotage a species determined to pull itself up.

The event the Feral5 called their superversary was a Surprise party, meaning that everyone was cosplaying Royal British Navy personnel, and the simulated ship they were aboard was, literally, HMS Surprise. Looking around, Frankie Barnes could hardly see a meter of deck where she and Maud hadn’t had sex.

The anniversary party was an intimate affair—thirty or so of the pack’s collected in-laws and a selection of @CloseFriends. Their packmate Jermaine was up near the wheel, addressing their guests. He wasn’t overly keen on the original Master and Commander fandom, and so had dressed as a Chinese Fleet Admiral from the 2079 reboot of the franchise.

Jerm’s speech covered all the things you usually heard at such events: warm words about Maud and Frankie falling into a big-time, full-on, hearts-and-flowers romance, about Maud making an enormous leap of faith by becoming Frankie’s primary and marrying into their unorthodox family bubble. “None of the Feral4 knew we were incomplete, not really, not until she joined us.”

All true … and the crowd was lapping it up.

Maud herself was turned out in the ragged naturalist’s gear of the Surprise doctor, complete with red-tinted hair and sideburns. The first time she’d seen this particular cosplay, Frankie had found the look compellingly sexy and thoroughly odd. Maud was about as far from a natural redhead as it got. She could have stepped right out of a historical sim set in the EastEuro steppes—one of those wildly popular pony-racing sims about the Mongol Derby, maybe—with her jet hair, sturdy limbs, and a round face.

As usual, she was visibly ill at ease about being the center of attention.

Frankie was about to beeline for her beloved when their other packmates fell into step on either side of her.

Ember Qaderi’s toon wore the half-starved body and the robes of a Persian prisoner of war, also from MC2079. As Frankie took this in, he attempted a clumsy, loose-limbed pirouette.

“You couldn’t chill about the old British Empire for one afternoon?” Frankie subbed.

“Colonization’s a freshly relevant issue in this day and age,” Ember said airily. “Besides, I had to balance out Babs.”

“Fair,” Frankie signed. Their feral fifth had wrapped her base avatar, a tortoiseshell cat, in full dress uniform as Admiral Nelson … or some cartoon femme version thereof.

As Jermaine’s speech built to its big finish, the three of them slid between the assembled partygoers, closing on Maud. Everyone raised their glasses and followed Jerm in a very royal round of shouting “Huzzah!”

Frankie offered an arm and Maud eased into her embrace, fitting snugly against her, two spaceships docking. Ember blew her a moji kiss, while Babs generated a purr that went down into the deck and came up as a vibration underfoot.

Contentment—bit of a rarity, that—suffused Frankie. This had been a good idea.

The whole pack was in the spotlight now. Jermaine strode down to join them, catching Frankie and Ember by the hands, completing the family bubble while their gathered guests signed hearts, threw confetti and petals, and made Awww! noises.

“Hang in there,” Frankie subbed to Maud. “They’ll all swing by to throw a few congrats at our feet. And then…”

Maud gave her a lascivious grin.

“I’ve got as much job as I can handle, thanks.”

“He’s already overachieving,” Maud said, enunciating each word as precisely as if she were cutting diamonds. “If you want speeching, Babs, take it up yourself.”

One of Jermaine’s fathers walked straight into this bit of banter. He’d disapproved of his son marrying into a bubble containing artificially intelligent beings, so the smile he tried to give them all now was curdled. It vanished altogether when the family’s other sapp, Babs’s codefather Crane, walked up in a butler costume, proffering a tray of champagne flutes.

“Thanks, Crane.” Frankie took two flutes, passed one to Jermaine’s father, and set about distracting him with an earnest monologue about Ember’s latest theoretical maths breakthrough. “If we Solakinder manage to open a seven-wormhole network,” she enthused, “it’ll be down to Ember. And we could never have done it without Jermaine pioneering the new implant tech—”

Char Mwangi tutted. “You make it sound like Jermaine grew the implant tish himself. He is but one member of the innovation team.”

Frankie gave that bit of prosocial wanking the very tiny nod it deserved. “And now he’s in the thick of the quantum-comms experiment. You must be so proud!”

The elder seemed to thaw a little. Crane moved on, buttling in barely legal defiance of the sapps’ work stoppage.

A gust of simulated wind caught the ship’s sails, crisping the fabric out with a gratifying snap. Surprise surged into the waves. Up at the wheel, Frankie’s fellow test pilot, Hung Chan, had booted up a tutorial on the rudiments of ancient seafaring. It was a far cry from flying FTL ships or planting wormholes, but his expression was blissful.

Frankie laid a hand on the small of her back and sent him a quick, secret text, via the pilot’s augment in her sacrum: All good, Pupper?

Any happier, Cap’n, I’d be widdling on the deck! They’re adorable, by the way.

She sent thumbs-up and let her gaze rise above her friend, where more of her in-laws—Ember’s mothers, kitted out as usual in licensed Star Trek gear—were high in the mainsail rigging.

Whole fam damly. She wondered, absently, if Hung was angling for an offer to join the Ferals, maybe in some kind of little-brother role. Though Jermaine would be attracted to him, inevitably.

She ran a thumb over the spyglass at her hip, triggering an in-app purchase within the sim. In response, a pod of dolphins made a spectacular, water-spraying leap, arraying themselves around the ship’s bow to cries of delight and applause.

“Such a gracious host,” Maud murmured, fanning herself with her straw hat.

Frankie offered up her best rogue’s grin. “Who says I don’t play well with others?”

“We could get up a poll on that,” Ember said. Jermaine snorted.