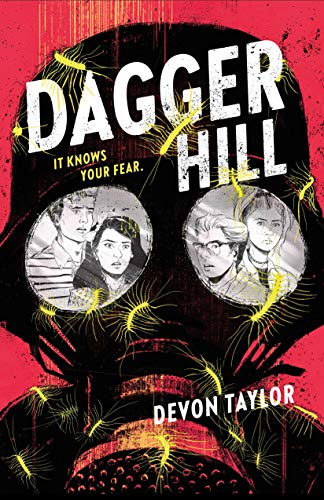 Stranger Things meets One of Us Is Lying in this creepy paranormal mystery about four friends who find themselves hunted by a malevolent presence in their sleepy hometown. It knows your fear... Summer, 1989. Four best friends―Gabe, Kimberly, Charlie, and Sonya―are preparing for their last summer together before senior year, after which they’ll all be splitting up to start college in different parts of the country. They make a promise to always find their way back to each other, no matter how far away from their sleepy Pennsylvania hometown they get. But their plans are destroyed when a plane crashes right on top of their favorite hangout outside of town―and right on top of them. In the catastrophic aftermath of the incident, Gabe, Sonya and Charlie are plagued by eerie visions and messages from an unknown watcher. They soon realize that the plane crash was no accident, and now they are being hunted by a sinister presence. And everyone is still searching for Kimberly, who has been missing ever since Gabe saw somebody wearing a gas mask carry her out of the woods the day the sky fell down on them... Praise for Dagger Hill : "A wild and satisfying romp through small town friendships, government conspiracies, bloody histories, long-kept secrets―and all of your deepest, darkest fears." ―Katrina Leno, author of Horrid


ON THE MORNING of the most disastrous day in Windale history, I’m in the passenger seat of my dad’s patrol car, dripping sweat. The ailing Crown Vic hasn’t had fully functioning AC since last summer, when Dad burned out the blower, and today is already one of the hottest days on record. I shift and squirm, trying to find some relief. But my clothes are glued to my skin and my bare arms are peeling off the leather like it’s flypaper.

“Dad,” I say, “are you ever going to take this thing in to the shop? I think I lost ten pounds just this morning.”

Behind the wheel, Dad turns the patrol car off Route 24, onto Old Briar Lane. We were in the Triangle before this, sitting in the damp, stagnant air of the car, parked right in front of the air-conditioned police station. We were breathing in the reefer stink coming from Sid Porter’s comic shop, and Dad was trying to decide whether he wanted to go in there and bust him for possession (again) while I was around. Then the voice of Rebecca Conner, Dad’s top deputy and right-hand woman, crackled through on the radio, told Dad she needed him out at the Webber farm right away. And off we went.

Dad caresses the worn-out steering wheel and says, “Why would I take it to the shop”—I mouth the next part along with him—“when I can just fix it myself?”

He doesn’t see me mocking him, so it’s safe to keep jabbing. “Because you don’t have time to fix it yourself. And if I’m going to ride around with you all summer, I can’t keep sweating like this. It’s going to totally screw me for football next year.”

Dad’s lips press together. He knows what I’m doing, trying to skip out on him. Not just today, but the rest of the summer. I told my dad I wanted to be a cop because I thought it was what he wanted to hear. I told him I wanted to play football for the same reason. Now I’m bartering with one to get out of the other. For now, at least. It’s my last summer in Windale, before senior year, before graduation. I’d rather spend it with my friends than cruising around town in this piece-of-shit car, wasting away in the heat.

The Webber farm comes into view, a wide swath of flat, grassy fields surrounded by low hills and dense trees. Clark Webber runs a cattle farm, and his land is all pasture, but today there’s not a cow in sight.

Dad angles the Crown Vic onto the property and parks behind his other two deputies’ patrol cars. He shuts off the engine, and the car chuckles with relief.

“I thought you wanted to do this with me,” he says, looking at me but also not. He’s squinting at something just over my head. I’m forced to stare at either his mustache, coated in droplets of sweat, or the ring of damp fabric that’s supposed to be his collar.

“And you’d rather spend it with your friends.” There’s color in his cheeks, and I can’t tell if it’s from the heat or from his rising anger. Maybe both. “Is that what you’re doing this afternoon?”

Here we go. “Yeah. We’re just getting together for lunch. Then maybe a movie at Sonya’s place.”

“Dad, why are you interrogating me?” I say, gesturing out the window at the farm. “Shouldn’t we…?”

“Just tell me where you’re having lunch, son.” Dad’s tone is patient, but his words are exactly the opposite. This is a conversation that’s nearly as old as I am.

I mumble the answer, because I shouldn’t have to say it when he already knows.

“Come again?” he says, raising his eyebrows. He stops short of cupping his hand around his ear.

“There it is.” Dad leans back, looking satisfied but also seething. Meanwhile, through the windshield, Rebecca Conner appears and waves, a little frantic, her brown skin shining with sweat. Dad gives her the “one second” finger, then cocks a thumb in my direction. Subtle.

Rebecca doesn’t miss a beat, though. She nods, gives Dad a thumbs-up, then catches my eye and winks. Hang in there, kid, she likes to say when Dad is on one of his tirades. Melvin O’Connell, Dad’s other deputy, is as good a guy as they come, but Rebecca is easily my favorite. She’s exactly the kind of person you want on your side when the shit starts to hit. Usually, when it comes to arguments between me and Dad, she’s on mine.

“Gabe, I’ve been telling you and your friends to stay off that hill since you were ten,” Dad goes on. “It’s not safe.”

“Dad,” I say, dropping my head back against the seat, “can we please talk about this later? Like, somewhere that’s not five hundred degrees and smells like cow shit?”

“Language,” Dad says, not with any conviction. Cussing apparently doesn’t bother him as much as me and my friends hanging out in the only place we ever have to ourselves. “I really don’t like it when you kids go up there, son.”

“We’re not kids, Dad. And we just go up there to … I don’t know … get away. Everyone else from school is always down at the Heart-to-Heart Bridge, and I know you definitely don’t want us hanging around that crowd. Dagger Hill is just the next best option.”

Only some of that is true. Charlie, Sonya, Kimberly, and I—we couldn’t show our faces at the Heart-to-Heart even if we wanted to. The four of us have been friends for so long, and we’re so tightly knit that we’ve funneled ourselves into our own subcategory of the high school social hierarchy. They like to call us the Almost Nobodies.