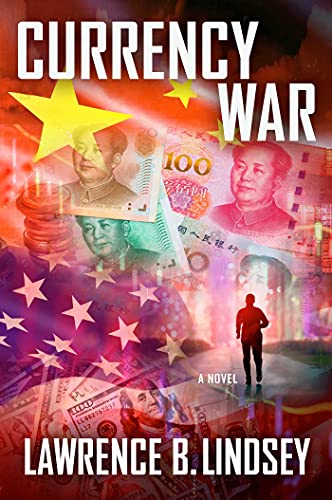 Currency War is an international thriller that only Lawrence B. Lindsey – economist, adviser to presidents, and Washington insider – could tell.

Coleman, chairman of the U.S. Federal Reserve under President Will Turner, realizes this is a harbinger of things to come… a suspicion confirmed by Li Xue, his counterpart in the Chinese government. Li is part of a modernizing movement that is locked in confrontation with a hardline faction headed by General Deng Wenxi. Deng sees the U.S. in a weak economic position and plans to make China the global superpower by replacing the U.S. dollar with the yuan as the world's reserve currency.

So begins a currency war between the United States and China – a war fought in dollars and yuan against a landscape of shifting international alliances and political infighting on both sides. Coleman's marriage is even compromised when his wife – a beautiful, retired MI-6 agent from England – is drawn back into the game of spycraft and intelligence gathering.

As the bloodless war rages, readers are taken on a roller coaster ride through the inner sanctums of power in the world – from the upstairs residence of the White House to the board room of the People's Bank of China; from a high society dinner party in London to the birth of a Political Action Committee at an exclusive Virginia resort; and from the bedrooms of the elite to the forbidden fleshpots of Laos.