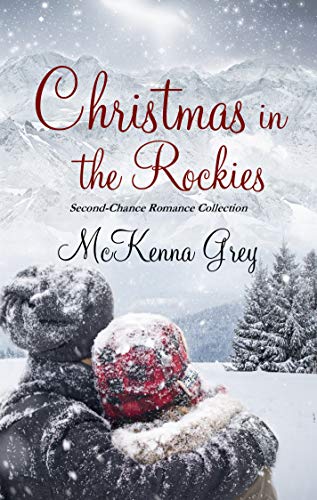 "McKensie's Christmas Gift"
When McKensie Scott returns to Wycliffe, Wyoming, she's uncertain of her future . . . and the man she left behind two summers before. With the help of an unexpected ally, McKensie will discover that sometimes leaving the people you love is the only way to find your path home.

"A Snowy Falls Christmas"
After five years of searching for answers at her family's home in Scotland, Maura Coburn returns to Snowy Falls, Colorado, the place she's always called home. When Wyatt Dobbes sweeps into town to take over his family's horse farm, Maura realizes five years might not have been long enough. When unexpected circumstances bring them together, Wyatt and Maura will soon discover the powerful magic of Christmas, love, and second chances.

"Christmas in Moose Creek"
Saige Travers said goodbye to Owen McGregor sixteen years ago. A spontaneous choice brings Saige home to Moose Creek, Montana, and she doesn't expect her past to catch up with her present. When Owen walks back into her life, she struggles to remember why she left. Together they discover second chances are real and hope is a cherished gift.

Can six willing hearts find a second chance at love? Join us this holiday season and fall in love like it was the first time.

On a winding mountain road in Moose Creek, Montana

THE 4X4 CAREENED to a stop and the driver waited in disbelief at the deplorable timing of Mother Nature. Moose Creek, Montana, had its share of wildlife—bear, deer, elk, mountain lions—but in her thirty-three years, Saige Travers had never seen a moose on this mountain. Until today.

No one waited for her in her swank two-bedroom condo in Seattle except the goldfish her brother gave to her as a joke for her birthday. She’d needed a break from the city and the cataclysmic string of end-of-the-road relationships she’d been in the past five years. More like dates, if she was going to be honest with herself.

She didn’t believe in settling for less when she wanted more. The “more” included her position as an ad executive for one of Seattle’s elite marketing firms, a corner office, and the respect of her colleagues while she worked her way up the time-honored ladder to the top floor.

Unfortunately, no one ever told Saige that when she reached the top, she would be alone more often than not. She enjoyed her work and the success she’d attained, but whenever the holiday season approached and her artfully constructed campaigns graced billboards, television spots, and magazine covers, Saige always experienced a moment of doubt and a touch of sadness.

Saige had completed her campaigns ahead of schedule, and while the leaves began to change in the landscaped park next to her office building, she’d found herself wondering how she ended up in a sky rise 500 miles from home. Autumn was her favorite season in Montana, and staring out her office window overlooking Elliot Bay, Saige realized she was exactly where she didn’t want to be.

In a moment of nostalgia, she clicked the bookmarked tab on her PC that took her to the chamber of commerce website for her hometown of Moose Creek. The town had put up a web camera overlooking Main Street and the tranquil bay of Eagle Lake. Out of habit and enjoyment, she perused the classifieds page, which featured five advertisements from local businesses. She smiled. It was a busy week for the chamber.

Whether it had been fate, luck, or good timing, an idea sparked. Saige had planned everything. From the day she graduated high school, packed up for college, and said goodbye to her high school sweetheart, every second had been part of a careful strategy to conquer the world.

One week ago, Saige had tossed aside every plan she’d ever made, and now she waited for a moose on a road she’d forgotten remained untraveled unless her parents happened to drive to and from town. According to the last conversation with her mother, they’d been holed up planning this year’s Halloween festival for a town that managed to fill every month with some kind of fair, feast, or special event.

If she’d told them she was coming, they would have asked questions, and right now, she didn’t have all the answers.

Coming home tripled Saige’s doubt because it forced her to face what she’d left behind fifteen years ago for her career—Owen McGregor. She had escaped Montana, or so she’d thought, without ever telling Owen how she felt about him. If she had, Saige might have stayed. All she managed was a hug and a few tears when she drove away. She’d kept busy, worked her way to a successful career, and accomplished her goals, but a week hadn’t gone by in those fifteen years when Saige didn’t regret her choice.

Saige pressed on the horn, the sound reverberating off the mountainside only to be muffled by the thick wall of pine trees on the opposite side. She pressed down again, this time gaining the attention of the moose.

“Okay, you win.” Saige held up her hands. “You win. I’ll wait right here until you decide not to stand in the middle of the road, you wacky-looking creature.” She exhaled, removed her wool cap, and lowered the heat a few degrees before she rolled down the window. Winter had come early to Montana, and she relished in the cold, crisp scent of the pine forest. Saige looked back out at the animal and wondered how its head would look above the great fireplace in her parents’ living room.

She shook her head and stared at the moose who stared back. “I know you don’t know what I was thinking, but I’m sorry anyway. Now, will you please get out of the way? I promise to never, ever hunt one of you in my life.”

Saige credited the moose’s departure to its own desire to be off the road rather than her nonexistent telepathic abilities with wild animals. She nodded her thanks to the lanky beast, shifted her car back into drive, and continued up the mountain.

Excerpted from "Christmas in Moose Creek" by McKenna Grey.  Copyright © 2016 by McKenna Grey. Published by Trappers Peak Publishing. All rights reserved. No part of this excerpt may be reproduced or reprinted without permission in writing from the author or publisher. This story is included in Christmas in the Rockies.