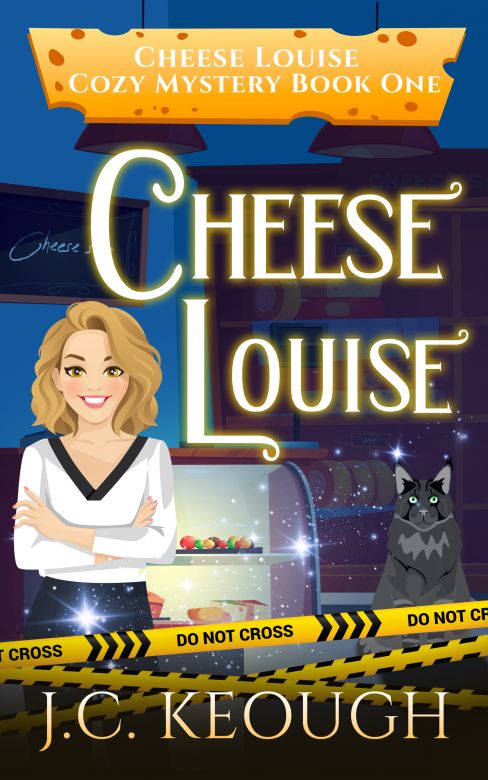 If it came in rinds and wheels, they sold it. But can she keep the lights on when her bestie turns blue?

Gertie Pratt wouldn’t call it a gift. Although her psychic senses have been dormant for thirty years, the cheese shop employee is happy she married a good man. But the forty-nine-year-old’s visions return with a vengeance when her witchy friend and boss is found dead… and it was no accident.

Returning home heartbroken only to walk in on her husband in another woman’s arms, Gertie dumps her cheating spouse and pursues her dream of being a detective. But in between juggling a hunky cop’s distractingly rugged looks, a landlord forcing her out of business, and the dearly deceased’s interfering coven, Gertie manages to bungle every interaction.

Can she use her unique powers to grill all the suspects without losing the fromagerie… and her life?

Buy Cheese Louise for a big slice of fun today!

I pulled the steering wheel hard to the right, and my Mercedes-Benz fishtailed into the back parking lot of a small strip mall. I stood on the brake, and the silver SL slid into my permanent Employee of the Month spot behind Cheese Louise. Despite my aching head, I’d made the short drive from my home to the specialty cheese and honey shop in record time.

The pain stabbed viciously behind my right eyebrow—being jabbed with an ice pick would be more pleasant. I wasn’t sure if my agony was due to lack of sleep, the second glass of champagne I’d drunk at the Lakewood Lilies’ Valentine’s Day gala the previous evening, or a combination of the two.

An oppressive unease had settled on me yesterday before the fundraiser benefiting the homeless. The nagging feeling that something was wrong had stayed with me all evening, although the event had been a smashing success. Afterward, I woke several times throughout the night, swamped by anxiety.

Well, I was a woman of a certain age, and maybe the change was starting. I groaned at the thought as I grabbed my Michael Kors tote bag from the passenger seat and fought my way out of the low-slung car. It already took a rigorous combination of starving myself and working out with the intensity of a Navy SEAL to keep my figure trim. I refused to think about how hard I would have to work at it after that happened.

With barely five minutes to go until I was scheduled to open the shop to the Lakewood cheese-loving public, I was cutting it close, even for me. Saturday mornings were manic, with last-minute cheese purchases for dinners and parties. I strode across the parking lot as fast as I could manage on my stiletto-heeled Saint Laurent boots, then came to a screeching halt. Louise’s beat-up Honda Prius was already parked in the owner’s spot.

Oh, fromage! What was she doing here? I didn’t want her to see me running into the shop this close to opening. Not that Louise would fire me, or even chastise me. We’ve been best friends for thirty years, much to my husband’s disgust. And I’ve worked for her at Cheese Louise for the last twenty of those years. No, Louise wouldn’t be mad, but she would tease me nonstop for at least a week about my legendary tendency to be late.

Shrieking and twittering pulled my attention to the trees that circled the lot. Lakewood, an older community in Dallas, Texas, was filled with old-growth trees and wildlife. The branches, bare of leaves in mid-February, were black with grackles. Something had set the birds off, and they shrieked and clacked above me. I shivered. My Irish mother referred to the feeling as “a ghost crossing your path.”

Their cries grew even more frenzied as I approached the shop’s industrial metal rear door. An arc of electricity sparked from the door handle as I reached for it, stinging my hand. The birds took flight, forming a black cloud that hovered over the parking lot and blocked the rays of the weak winter sun. The world tilted, then disappeared, and a heavy pressure settled on my chest.

When the parking lot came back into focus, the birds had fled, leaving me in solitary silence. I didn’t know how much time I’d lost. Probably only a second or two, since I was still standing with my hand outstretched toward the door. But as sure as I knew my name, I knew Louise was inside, and she was dead.

I dug my phone from my purse but stopped partway through tapping 911. Unfortunately, my psychic ability—or my “gift,” as Louise called it—was minimal at best and faulty at worst. I should at least look inside the shop before going off half-cocked.

Praying I was wrong, I reached cautiously for the doorknob. There were no arcs of electricity this time, but it was locked. That wasn’t surprising. This was the service entrance, and it stayed locked unless we were expecting a delivery. Cheese Louise’s customers used the street-front parking on the public side of the store.

Taking a steadying breath, my keys jingling like a wind chime in my shaking hand, I unlocked the door and leaned into the back room. The lights were on, the florescent bulbs casting a harsh glow on the large room that acted as kitchen, storage area, and office. Everything was in place, and it appeared empty. I sagged against the doorframe in relief. Louise wasn’t here. She must have left her car in the lot and taken a rideshare home. She often did that rather than driving after a late night making cheese platters and having a glass or two of wine. I quashed the niggling voice saying she would never have left the lights on, wine or not.

I stepped inside, and the door banged shut behind me, making me jump. The arc of electricity had just been a plain old static charge, I told myself. And my hangover had brought on the fuzzy feeling I had outside. Bypassing the industrial island that took up most of the floor space, I set my purse on top of our shared desk and smiled. Louise would never know how close I had cut it. As I started toward the front of the store to open up, the pointed toe of my boot kicked a small object. It rattled as it rolled under the desk. I looked down and froze.

Louise lay on the floor, her dark eyes staring sightlessly. The contents of her purse were strewn around her on the cold white tiles. The waxy cast to her unnaturally pale skin convinced me that there was no point in checking for a pulse.