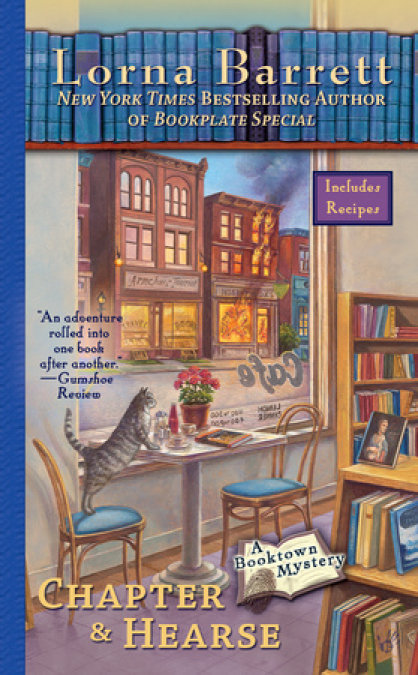 Mystery bookstore owner Tricia Miles has been spending more time solving whodunits than reading them. Now a nearby gas explosion has injured Tricia's sister's boyfriend, Bob Kelly, the head of the Chamber of Commerce, and killed the owner of the town's history bookstore. Tricia's never been a fan of Bob, but when she reads that he's being tight-lipped about the "accident", it's time to take action. 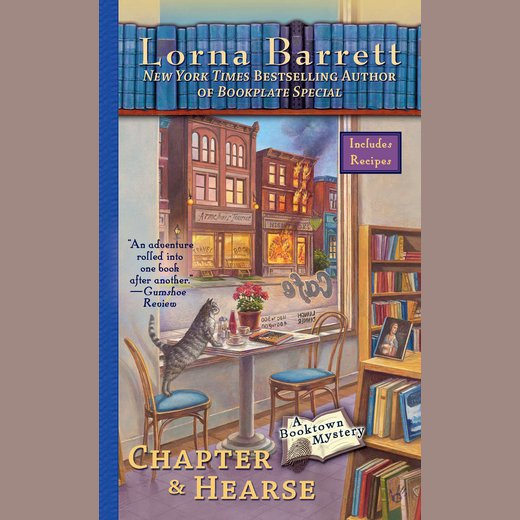 The poster on the Cookery’s display window had advertised the book signing for at least a month. Throngs of people were supposed to be in evidence. A temporary cook station had been assembled, and ramekins filled with diced vegetables, chopped chicken, and spices were lined up like props in a stage play.

Tricia Miles forced a smile and tried not to glance at her watch. “Everything looks perfect,” she said with a cheerfulness in her voice she didn’t quite feel.

The “guest” author, her sister Angelica, stood behind the cook station, head held high, although her eyes were watery and her mouth trembled ever so slightly. Next to her stood a larger-than-life-size photo cutout of . . . herself! The real Angelica was maybe five foot six in her stocking feet—the cutout was six feet tall, dressed in dark slacks and a white blouse covered by a buff-colored, full-front apron with her,name emblazoned across the front: ANGELICA MILES, and beneath that: author of EASY-DOES-IT COOKING.

Tricia tried to concentrate on the living Angelica, but her gaze kept wandering to the cutout. It wasn’t a good likeness, but somehow Angelica had missed that when she’d purchased the thing as an aid for promotion. Her rather demented expression was one of perpetual surprise—either that, or one of a victim of bad plastic surgery. With her fingers splayed, the cutout reminded Tricia of a bird spreading its bony wings. Yes, that was it—Angelica looked like she’d been goosed. Either that, or the photographer had coached her into an uncanny imitation of a constipated blue heron.

The real Angelica spoke, her voice sounding wobbly. “Nobody’s going to come. Not one person.”

“And I,” said elderly Mr. Everett, Tricia’s other part-time employee.

“Don’t forget me,” Frannie May Armstrong said in her Texas twang. Angelica owned the Cookery, Stoneham’s cookbook store, and Frannie managed it for her. Angelica also owned Booked for Lunch, a retro café across the street. Writing cookbooks was just another entry on her colorful résumé.

Unfortunately, the village of Stoneham, known locally as “Booktown,” was more a tourist destination not far from the New Hampshire/Massachusetts state line. Not many of the locals supported the booksellers, who’d been recruited to save what had been a dying village. And shops filled with used, rare, and antiquarian books had done it, too, as evidenced by new prosperity and a much-needed influx of tax revenue.

“Wasn’t a busload of gourmands supposed to arrive for the signing?” Mr. Everett whispered to Frannie.

“I got a call about an hour ago,” she whispered in reply. “They canceled, but asked for a rain check. They may come up sometime in the fall.”

Tricia refrained from commenting. Thanks to the Internet, Angelica had cultivated a relationship with the “Gamboling Gourmets,” who traveled New England throughout the summer, tasting the local cuisines. Tonight’s signing was to be their first outing of the year, and Angelica’s launch party. She’d spent days preparing a table full of desserts—all from her newly published book, Easy-Does-It Cooking, which had been officially available all of two days.

Angelica’s cutout notwithstanding, Tricia had expected at least a few more warm bodies to attend the signing. Mr. Everett’s bride of eight months had come down with a cold, which explained her absence, but surely the employees at Angelica’s café—Jake Masters, the cook, and Darcy Gebhard, the waitress—might have made an effort to be there. And someone else was conspicuous by his absence.

“Anybody know where Bob is?” Frannie asked.

Bob Kelly, owner of Kelly Real Estate and the president of the local Chamber of Commerce, had been Angelica’s significant other for the past eighteen months—ever since she’d come to live in Stoneham.

“I’m sure he’ll have a perfectly reasonable explanation for being late,” Tricia lied. She and Bob weren’t exactly best friends, but she tried to overlook his many shortcomings for her sister’s sake.

“I saw his car parked down the street, near History Repeats Itself,” Ginny volunteered. “It’s been there awhile.”

Angelica nodded, resigned, and tucked a lock of her short, blonde hair behind her left ear. “Business hasn’t been good lately, and he’s been preoccupied. It probably just slipped his mind.”

“I’m sure you’re right,” Tricia said, and hoped her nose hadn’t just grown an inch. For weeks, Angelica had done nothing but talk about the event.

Frannie straightened the stack of unsigned books on the side table, and everyone tried not to make eye contact with Angelica as they waited in awkward silence for someone—anyone—else to arrive. Finally, Ginny suggested Angelica go ahead with her cooking demonstration.

“Well, it’s almost seven thirty, and none of us has had dinner. I can’t be the only one eager to try your Hacienda Tacos.”

“Good old Tex-Mex—the best food on Earth,” Frannie piped up, then sighed. “Next to a luau, that is.” It was Frannie’s dream to retire to the fiftieth state.

Angelica gave a careless shrug and turned on the electric skillet.

Across the street, the newly installed gas lamps glowed. The Board of Selectmen had approved the installation of the old-fashioned streetlights in an effort to capitalize on the town’s history and its new lease on life. Tourists ate up that kind of stuff, and the Board of Selectmen was eager to do all it could to encourage their visits. Unfortunately, when the bookstores closed, the visitors disappeared, leaving no one to appreciate them.

Within minutes, Angelica had prepared the filling, spooned it into corn tortillas, and passed them out to her small—and hungry—audience. The desserts were then sampled, and everyone sipped complimentary coffee, not making a dent in the contents of the five-gallon urn borrowed from Angelica’s café.

As Angelica served Mr. Everett another portion of coconut cake, Tricia gave Ginny a nudge. “Buy a book,” she whispered.

“Use your charge card, and I’ll credit your account tomorrow morning. I want Ange to make at least a couple of sales tonight.”

Ginny shrugged. “If you insist.” She set down her paper cup, grabbed a copy of the coffee-table-sized book filled with glossy photos, and marched up to the cash desk where Angelica stood wringing her hands. “I don’t know about the rest of you, but I’m proud to be the first to get my signed copy of Easy-Does-It Cooking.”

Mr. Everett’s nervous gaze shifted to Tricia. She mouthed the words Buy one—I’ll pay you back.

Luckily, Angelica hadn’t noticed Tricia’s prompting. She pressed a clenched hand to her lips, fighting back tears. “You guys are just the best. Frannie, grab the camera, will you?” she said. Next, she played director, carefully positioning Ginny with her back to the camera, posed to her satisfaction. She shook Ginny’s hand. She raised a finger to make a point. She looked surprised—then serious, and, ultimately, very silly. At last, Angelica reached for her pen, wrote a few words on the flyleaf of Ginny’s copy, and signed her name with such a flourish that it was completely illegible. Frannie kept snapping pictures as Angelica handed the book to Ginny.

“Yes, don’t you think that’s clever?” Angelica said. “I’m going to sign that in all the books.”

Though Ginny forced a smile, her voice was flat. “Go for it.”

As Mr. Everett stepped up to have his book signed, Tricia moved to look out the large display window that faced Main Street. As Ginny had said, Bob’s car was parked near History Repeats Itself. Tricia’s anger smoldered. How inconsiderate of Bob to ignore Angelica’s very first signing. He had to know how much it meant to her.

Tricia glanced back at her sister and Mr. Everett, still posing for Frannie. In a fit of pique, she decided it was time for action. She’d go find Bob and, if necessary, drag him back to the Cookery by this thinning hair. Besides, Angelica’s photographic self was beginning to creep her out.

Tricia took a Zen moment to calm herself before she spoke. “I think I’ll run out and see if I can find Bob,” she told Angelica. “If his car is parked down the road, he can’t be very far away.”

“I suppose,” Angelica said. “But please hurry back to help us pack up some of these desserts.” She shook her head, taking in the amount of leftover food. “I can’t serve all this at the café. Would you like to take some home, Ginny?”

“Would I? Hand me the plastic wrap, will you?”

“Be right back,” Tricia called and headed out the door.

The village was practically deserted, and Bob’s car was the only vehicle parked on the west side of Main Street. Tricia crossed the street and started down the sidewalk. Upon consideration, she decided she wouldn’t berate Bob, at least not in front of Jim Roth, owner of History Repeats Itself. It wouldn’t do to go ballistic with him as an audience. Instead, her plan was to poke her head inside the door and cheerfully ask if Bob hadn’t forgotten another engagement—and probably do it through gritted teeth.

The glowing gas lamps really did lend a quaint, old-fashioned charm to the already picturesque storefronts. Although an expensive indulgence, they added to the village’s ambience—especially outside of Haven’t Got a Clue. It went right along with the atmosphere she’d created, emulating 221B Baker Street in London.

Tricia was within two doors of History Repeats Itself when she paused to look inside Booked for Lunch. Angelica had done a wonderful job decorating the café. Heck, she’d done a terrific job managing two businesses and starting a writing career. Not that Tricia had ever mentioned to Angelica how proud she was of Angelica’s accomplishments. As it was, her swelled head could barely fit through a standard doorway.

As Tricia took a step forward, she heard a phoomph. The Earth shook as a shower of glass exploded onto the street, and a rush of hot air enveloped her, the shock of it knocking her to the ground.

Then everything went black.