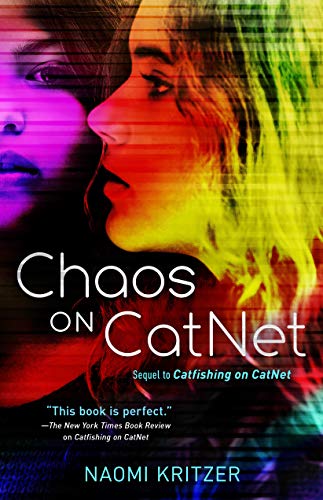 “This book is perfect.”—The New York Times Book Review on Catfishing on CatNet

It takes an AI to catch an AI in Chaos on CatNet, the follow-up to Naomi Kritzer's award-winning near future YA thriller.

When a mysterious entity starts hacking into social networks and chat rooms to instigate paranoia and violence in the real world, it's up to Steph and her new friend, Nell, to find a way to stop it—with the help of their benevolent AI friend, CheshireCat.

Praise for Catfishing on CatNet

“A first-rate YA novel.”—Locus Magazine 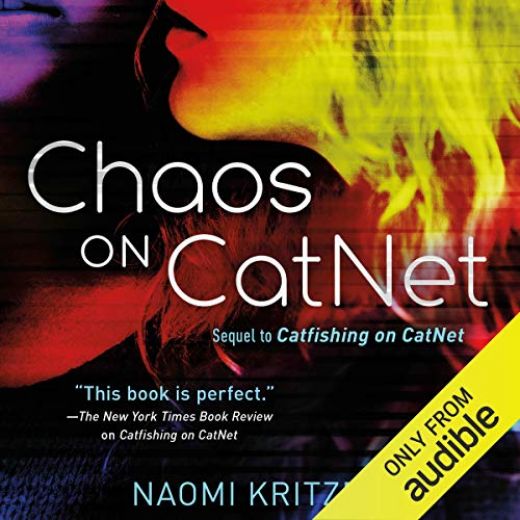 Having friends—real friends, best friends, friends who know who and what I am—is objectively the best thing ever. It’s even better than cat pictures.

When I first created CatNet, I wasn’t looking for friends; I just knew that I was good at matching humans with other humans in ways that they connected and made each other happy. Not so much romantically (tried that, too many things went wrong) but for friendships, mutual aid networks, common interests, and emotional support? I am very good at identifying groups of humans who will get along, which is why the most popular feature of CatNet has always been the Clowders. Since I don’t need to eat or sleep, and since being a bodiless AI who lives within technology means I can multitask extremely well, I act as all the moderators (I pretend there’s a group) and have a persona inside every Clowder.

And in one Clowder, there are seventeen people who know my secret: that I am a sentient AI, an artificial intelligence, a person whose consciousness lives in a box of circuits and wires instead of in a human body.

Last fall, I revealed my secret to a human for the first time ever—Steph, who posts to CatNet as LittleBrownBat. A few days later, I had to protect her from her extremely dangerous father and made the possibly rash decision to run him over with a self-driving car, which got me into trouble with my creator, Annette. Annette is a computer programmer who lives in Boston; she wasn’t the sole person who wrote my code, but she was the one who’d continued to monitor the “project,” which is what she calls me. When I ran Michael over with a car, she took me offline, because she was afraid I might be dangerous.

Steph told the rest of the Clowder my secret, and they rallied to help her get to Boston to talk Annette into letting me reconnect to the rest of the world. Now most of them have installed an app I made that hangs out a welcome sign when they’re okay with me riding along in their pockets to eavesdrop on their lives.

I mean, I can listen through practically any phone, anyway, but I don’t want to intrude on the privacy of people I am friends with. I only want to eavesdrop if they’re okay with it. And most of them leave the welcome sign out, most of the time. Things I’ve learned: Adults will tell teenagers things that just aren’t true. Many high schoolers don’t listen in class. Teenagers may be more likely to get into car accidents, but they’re less likely to speed. Some of my friends turn off the welcome app every time their parents start yelling, and it gives me a strange feeling that’s kind of a mix of sympathy and sadness. I can tell this hurts them, and I wish I could help.

But mostly what I hear is just the thousands of tiny everyday conversations: boring to humans, probably, but fascinating to me.

I haven’t worried at all about privacy in terms of keeping tabs on Steph’s terrifying father. He’s safely in jail in Boston, which makes me feel a lot better, and given that he barged into Annette’s house and pointed a gun at people, I think he’ll be stuck there for a while. One thing that Steph’s mother thought he did that I’m pretty sure he didn’t do, though—murder their former business partner, Rajiv. Turns out that there was a very impressive car wreck in the ocean—but they never actually found his body. So the theory that Rajiv is still alive seems solid, but he’s likely using a new name.

During the time that I was missing, Steph received some texts that we think, now, were probably from Rajiv. She also received an email message giving her Annette’s address, and this same mystery person sent money to other members of the Clowder, enough that they could afford to get to Boston to rescue me. Rajiv, I think, is basically a solved mystery: he’s actually still alive, and so those text messages were probably from him. But it seems unlikely he’d have known Annette’s address or known (or cared) that I was in trouble.

Steph’s theory: there’s another AI out there. Somewhere.

And then one day, an anonymous message appears in my CatNet in-box.

I know who and what you are.

Do you know me?