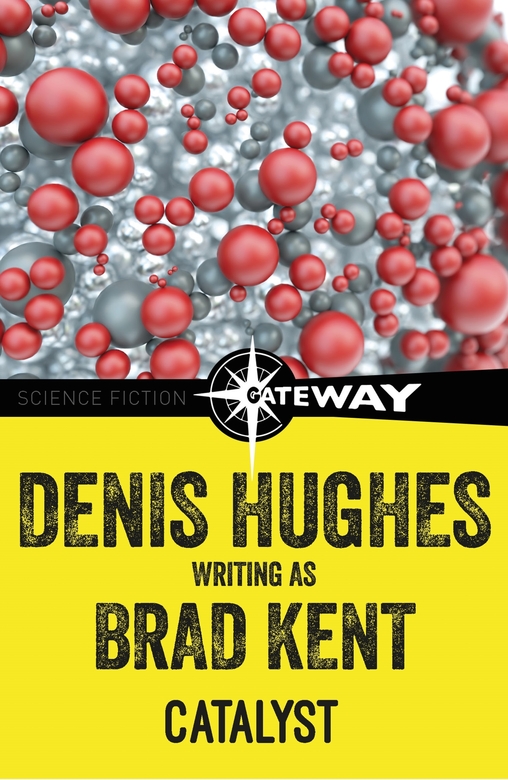 When Michael Corrigan moves from his London flat to a remote cottage in the middle of Dartmoor, he expects to spend his time in peace and quiet, working on his book. Instead, he finds a strange woman wandering the moors in the middle of a storm, dazed and confused with no idea of her location or even her own name.

They find themselves inexplicably drawn to each other, as though they are connected somehow. In another place... or another time?

As the night passes they are plagued with visions of a far-flung future. One where the Earth is on the brink of death, suffocating under a layer of unstoppable lichen, and humans are forced to live underground. How are these two people connected to the fate of humanity? Can they possibly save the world?

This book was published under one of Denis Hughes' many pseudonyms, and is available in eBook for the very first time!

THE cottage was small and snug, sheltered in a ford of the moors. A rough track led to its door from the village four miles away. Anyone approaching the place from that direction came on it suddenly, a low, oblong structure of grey Dartmoor stone, slab roof, and short, stunted chimney. Viewed through the windows of the low-ceilinged rooms, the scarps and folds of the moors rolled unendingly westward, a world of grey and brown and green, wind-swept, often wet and misty, always majestic.

Jagged crags of granite reared tooth-like on a bare ridge half a mile to the north, spectral shapes, ancient as Time.

Locally, the cottage was known as “Old Mark’s Place”, though it bore no official name. Nor did living memory reach back as far as the personality of “Old Mark” himself. If he ever existed he was now submerged and forgotten in the Past.

Empty for many years, the cottage had been restored and furnished by Doctor Septimus Marvane when he inherited the big Marvane Estate from his father. What he originally intended to do with the place was uncertain, but after standing idle for several months it was unexpectedly available to rent.

And for some reason even he could not name, Michael Corrigan took a lease on the cottage.

Corrigan was a writer. His biographies and learned essays on anthropological matters were well-known. People who knew him as a friend looked on Michael Corrigan as quiet and reserved. But he was not the kind of man to bury himself in an isolated cottage in the heart of Dartmoor. All the more strange, therefore, when he rented “Old Mark’s Place”, and moved in one autumn afternoon when the drizzle of a mist was hazing the moors and blurring their outlines.

After carrying his bags in from the car and dumping them in the living room, he went outside again, to stand for a moment staring unseeingly through the mist, feeling its chill, clammy touch on his face.

“What possessed me to come to this place, anyway?” he said aloud, suddenly irritated. “I don’t know!” He slid in behind the wheel of the car and drove it to an open-fronted shed that served as a garage. Turning his collar up, he made his way back to the cottage, still pondering the question he had asked himself more than once. It definitely was a question, for although he manufactured excuses by the dozen not one of them really accounted for his sudden unwarranted removal from a comfortable London flat to his present surroundings.

The drizzle ceased an hour or two later, leaving the sky in the west red and angry with a sullen sunset below a fringe of ragged cloud wrack.

It was the sight of the redness in the sky, coupled with an inward restlessness that troubled him, which finally prompted Corrigan to visit the village as soon as he was settled in.

Thinking the exercise would do him good, he decided to walk down the track. It was a drastic cure, but his mind was unsettled, not at peace with itself. He took a stick and set off, frowning, puzzling his brain as he walked quickly over the uneven surface of the track. Grey, wet granite struck harshly against his shoes as he swung along. A tall, good-looking man, he felt himself insignificant against the vast backcloth of the moors.

Gradually some peace of mind came to him, so that by the time he reached the village he was wrestling with the problems that faced him in the writing of an important treatise on the origins of Neanderthal Man in the northern hemisphere.

The village was clustered tightly round a church on the banks of a swift, narrow stream. It was almost as isolated as the cottage, but seen in the dusk of evening against the now-black sky, its lights and sounds were welcome. Beyond it, on a low hill, Corrigan could see the blocky outline of Doctor Marvane’s house, standing like a fort above the village. There were lights in the windows, and he reminded himself to make the closer acquaintance of the famous biologist whose property he was renting.

Quick at making friends, Corrigan spent an hour in the little white-walled pub. When he finally took his leave it was with the good wishes of the landlord and a standing offer to make himself at home anytime he felt like it. He also took a bottle of whiskey away with him.

Plodding less hurriedly through the darkness, he decided that there might after all be advantages in a country life. He was young enough—thirty-two—to adapt himself to change; old enough to realise that there was much to be said for the peace and solitude of the moors. He felt he would be able to work here uninterrupted, though just at the moment there were many details to be sorted out before he could really begin on the treatise he intended to write.

He was only just beyond the bounds of the village when the rain began. With little or no warning, it came down in sheets, hissing on the surface of the track and turning it into a miniature torrent. In spite of his raincoat, Corrigan was quickly drenched. It was so dark now he could barely see a hand before him, and the lashing rain made matters worse.

A few minutes later he heard the first roll of thunder, reverberating in the unseen clouds. Then the storm broke in earnest. Lightning seemed to spew from the sky in vivid zig-zags of blue; the thunder was right overhead, a crashing, stunning cacophony of sound.

Corrigan halted involuntarily, throwing up an arm to cover his eyes as a blinding flash carved through the streaming rain only a few yards to his right. He muttered to himself and plunged on, knowing full well that there was no shelter to be had till he reached the cottage. Only a stubborn pride prevented him from turning back to the village. He was so wet that it just didn’t matter anymore. The wind howled in his face, driving the rain and battering at his eardrums; the lightning alone showed him where he was going. Almost continuous now, it blazed and died, blazed and died all round him. He felt as if he himself was the very centre of the storm, yet felt no fear in the knowledge. He was not a nervous man, and the fury of the elements was of little more consequence than the discomfort it brought in its wake.

Halfway back to the cottage, with the storm at its height, he stopped abruptly, peering through the fire-shot darkness to a point about a hundred yards to the left of the track.

Surely there had been a figure standing over there!

Lightning hissed and ripped to earth, to be followed by an earsplitting crash so loud as to deafen him.

Dazzled, he stared through narrowed eyes, not heeding the drenching downpour of the rain.

There was someone there! Corrigan could hardly believe it; not because anyone else should be out in the storm, but because whoever it was simply stood there, motionless on a knoll, the blue and white flicker of lightning bathing them weirdly.

“Must be mad!” he grunted. Impulsively he struck away from the track and brushed through knee-high heather to where the figure was standing. He sank to his thighs in a bog, struggled free, made a detour and floundered forward with greater caution.

Then he shouted to the solitary figure on the knoll: “What are you doing there? Can’t you get off?”

If there was any answer the screaming wind whipped it away. He muttered something under his breath and went closer, curious now, the first faint prickle of unreality touching his mind.

As if to light his way, the storm increased in fury. By a series of vivid flashes from the sky he saw the figure more plainly. To his amazement he realised it was a woman, apparently frozen into immobility by fear or some kindred emotion. She wore a pale coloured coat, and in the next flash of lightning he saw that her hair was blonde, plastered to her head and face by the pouring rain.

Scrambling over outcrops of granite on which he barked his shins, Michael Corrigan reached the knoll and stopped.

“Didn’t you hear me when I called?” he demanded irritably.

She looked him full in the face. Her eyes were wide and untroubled; she was oddly calm.

“No,” she said. “No, I didn’t hear you? What do you want?” There was a curious quality about her voice, as if it was not entirely her own. The thunder almost drowned it, for she spoke in little more than a whisper. And her hands were thrust in her pockets. She might have been standing on a seaside promenade in summer for all the notice she took of the storm. Had it not been for the rain that dripped continuously from her nose and chin, Corrigan would have thought he was imagining her presence out there on the moors.

“Look,” he said patiently, “you can’t just stand there! You’ll get pneumonia or something! How did you get here? Where have you come from?”

She looked at him for several seconds before replying. Then: “I shan’t catch anything,” she said. “I don’t know how I got here. Does it matter a lot?” There was a sudden dullness in her tone that exasperated him more than anything else about her.

“Well, I’m not going to leave you here!” he said harshly. “You’d better come back to the cottage; it’s the nearest place.” He reached out to take a grip on her arm, but she swivelled away. The first time she had moved a muscle, he thought. She must be crazy!

Corrigan frowned, wondering what on earth she meant by that cryptic remark. Then he shrugged and turned on his heel.

“Come on,” he flung over his shoulder. “If you are sensible you’ll do as I suggest. I shan’t hurt you; don’t worry.”

He frowned again, pausing as she came up with him. But she stayed a couple of feet to one side of him, no closer. What kind of woman was he taking to the cottage? he asked himself. Whoever she was, there was something pretty qu. . .