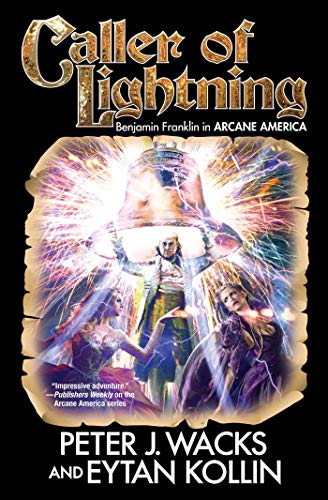 BENJAMIN FRANKLIN IN THE ARCANE AMERICA SERIES Caller of Lightning begins before volume one of the trilogy and brings the series full circle by depicting the origins of Arcane America. As Benjamin Franklin pursues his famous scientific and political work, he uncovers a world-changing magical plot he must thwart to save the lives of those around him. The only problem with that is that he didn't even believe magic was real until an accident with his kite experiment unlocked the ability in him. The ever-inquisitive Franklin races to decipher the rules of this mystical force and learn to control it while maneuvering through the politics and intrigue of the Royal Court in London. But Franklin is in for a shock if he thinks his work as a scientist and inventor will prepare him for the world of magic. Franklin must conquer this new field of knowledge quickly, for he is far from the only one studying magic. In fact, he's late to the race and almost out of time . . . Praise for Peter J. Wacks: "Peter Wacks is a talented writer coming at you from all different genres. Watch out, readers!"--Kevin J. Anderson "There are no single chapters in Peter's stories. If you read one, you are compelled to read them all, beginning to end in one sitting."--Steven L. Sears, Writer/Producer; Xena - Warrior Princess, The A-Team, Walker - Texas Ranger, and others Praise for the work of Eytan Kollin: "Reminiscent of Heinlein--a good, old-fashioned, enormously appealing SF yarn. bravo!"--Robert J. Sawyer "Turns what could have been a one-note trilogy into something more interesting that encompasses a wide range of ideas."-- The Denver Post "The Kollins' masterful command of multiple plot threads, characters, and the motifs of grand-scale space opera make for a breathtaking sequel."--Booklist "Rich with multiple plot thread skillfully handled by the authors. . . . Well-conceived characters, along with intense battle-oriented space content, will keep even new readers glued to the page."-- RT Book Reviews