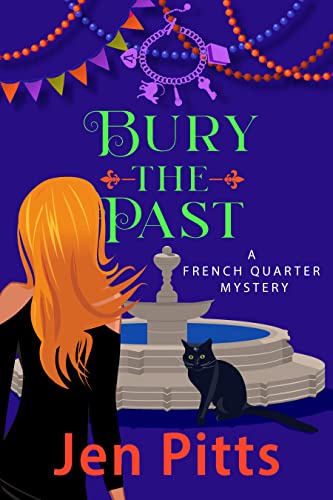 Sammy is surprised her prickly neighbor wants her help after a skeleton is discovered in a French Quarter courtyard. But she’s even more surprised when the decades-old bones lead her to a murder that’s closer to her home and heart. Can Sammy find the truth before the past is buried again?

When the detectives show up in Thibodeaux Mansion’s courtyard, Sammy is relieved they’re not there for her. But to her surprise, they need to see Ruby, her next-door neighbor. Even more shocking, Ruby asks Sammy to come with her to learn if the skeleton unearthed at the Delmar Apartments is Ruby’s missing daughter. As Ruby’s past comes to light, so does Sammy’s with a letter from her brother.

After the identity of the body is revealed, Sammy needs to find out what really happened twenty-six years ago when two teenagers disappeared without a trace. As if investigating a cold case isn’t hard enough, Sammy also has to face the real possibility that her brother is back in town. If he is, what does he want? Or worse, will he try to kill her again?

A twenty-six year old mystery collides with a modern day one that shakes Sammy to her core. To solve one mystery, she must solve the other. Can she find the evidence she needs to find closure for everyone before the killer buries the past?

Bury the Past, the fourth book in The French Quarter Mystery Series, features newcomer Samantha Richardson. Join Sammy as she explores the Big Easy by solving mysteries of the past and present in this cozy mystery series.

“Samantha, the spirits are restless. I must clear away all the negativity.” Ruby stood in the  middle of the courtyard, waving a bundle of sage. “And that includes you.” I rolled my eyes as I called for my black cat, Nubi. Ruby Virtue had been my next-door  neighbor for four months, but we still weren’t what I considered friends. Our cats, however, were  buddies with their daily jaunts around the neighborhood and sun-basking sessions in our  apartment building’s courtyard.

This morning Ruby and I looked like we belonged to the same coven, with our fluttering  bathrobes and black cats racing toward us. Ruby’s lilac chiffon robe with a matching headscarf  was more theatrical than my utilitarian white cotton robe, although my cat-shaped slippers added  a bit of whimsy, but not witch chic, to my ensemble. They also protected my feet as Nubi  pounced and attacked my slippers. Ruby’s cats, Cleopatra and Nefertiti, sat calmly by their  human but watched Nubi’s every move. I bet they wanted to join in on his fun.

I picked up Nubi after he nicked my ankle. “It’s also too hot. I can’t believe it’s this warm  already.”

“Heat and evil spirits are just part of New Orleans.” Ruby grasped the purple crystal around  her neck. “You should know that by now.”

Yes, I knew that. At least about the heat. It was early summer and the humidity permeated  the air at 7 a.m. I would need to crank up the air conditioning when I got to work. Lagniappe  Books would fill with heat and customers as soon as I opened the store. As the new co-owner of  the shop, I was managing alone today. My best friend and business partner, Andrew Ballard,  taught a class at Tulane University every Friday.

“But why are you out here?” I asked. “I don’t think I’ve ever seen you up this early.” “True, I’m not a morning person, but the Goddess of Good called to me. I picked up my sage  and headed right out here to find the negativity.” She adjusted her headscarf with her ring-laden  fingers. “And you.”

My spiritualist neighbor was not my favorite person with her constant admonishments about  the trouble that followed me or that I supposedly invited in. While I found myself in sticky  situations on occasion — OK, on a lot of occasions — I still didn’t know why I irritated her so  much.

“Then I’ll head back inside with Nubi and my newspaper before you stink up the whole  French Quarter with your herbs.” Before I took a step, the sound of the front gate startled me. It  must have done the same to Ruby as she dropped her sage and stared at the two people entering  our courtyard.

Although I considered them friends, by their solemn faces and brisk walk, I could tell Rob  and Christine were here on business. As homicide detectives for the New Orleans Police  Department, Rob Armstrong and Christine Gammon handled many of the murder cases in the  French Quarter. I squeezed Nubi tighter as I prayed they weren’t here to see me.

Ruby was praying too, although I could never make out the words when she chanted to her  Goddess of Good. Her prayers went unanswered this time.

“Miss Ruby, I’m glad you’re already awake this morning,” Rob said. He lived above our  apartments with his fiancée and my best friend, Sissy Covington, so he was aware of Ruby’s  habits. After a few run-ins with her, Rob now crept down the stairs when he left at odd hours,  which wasn’t easy with his body-building physique and size fourteen shoes. “We need you to  look at something.”

Christine took out a small plastic bag from the pocket of her gray blazer. “Miss Virtue, do  you recognize this bracelet?” She showed Ruby a tarnished silver bracelet with specks of dirt  encrusted on the five charms dangling from it.

Ruby was so entranced looking at the jewelry while Rob and Christine stared at her, so I put  Nubi on the ground and stepped closer. It was a chunky bracelet, and the charms were a  microphone, a key, a book, a cat, and a heart with a V engraved on both sides. “Miss Ruby, do you recognize this?” Rob asked.

“Of course I do. I bought it for my daughter, Verity.” She reached out for it, but Rob gently  clasped her hand in midair and held it. “Miss Ruby, I’m sorry, but we found it with human  remains here in the French Quarter.”

“Where is she?” Ruby’s voice cracked. “When did she get here?”

“Ma’am, why do you ask when she got here?” Christine put the bracelet away and took out  her notepad and pen.

“She left twenty-six years ago when she was seventeen years old.” Ruby closed her eyes and  wrapped her thin arms tightly around her body.

“You have a daughter?” I gasped. She had never mentioned a child, or any family, to me or  anyone else in our bu ilding. “Where has she been?”

Ruby’s eyes flew open. “I have no idea where my daughter has been. Did she come back to  New Orleans just to die?”