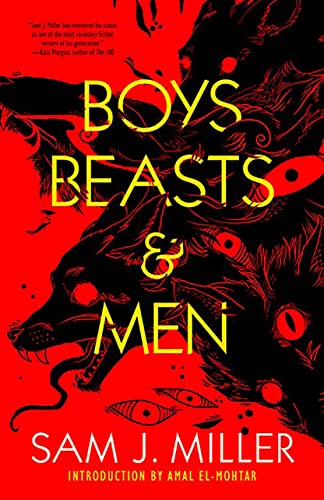 “Miller’s sheer talent shines through in abundance . . . Boys, Beasts & Men is an outrageous journey which skillfully blends genres and will haunt you with its original, poetic voices as much as its victims, villains, and treasure trove of leading actors.”
—Grimdark Magazine

Despite his ability to control the ambient digital cloud, a foster teen falls for a clever con-man. Luring bullies to a quarry, a boy takes clearly enumerated revenge through unnatural powers of suggestion. In the aftermath of a shapeshifting alien invasion, a survivor fears that he brought something out of the Arctic to infect the rest of the world. A rebellious group of queer artists create a new identity that transcends even the anonymity of death. 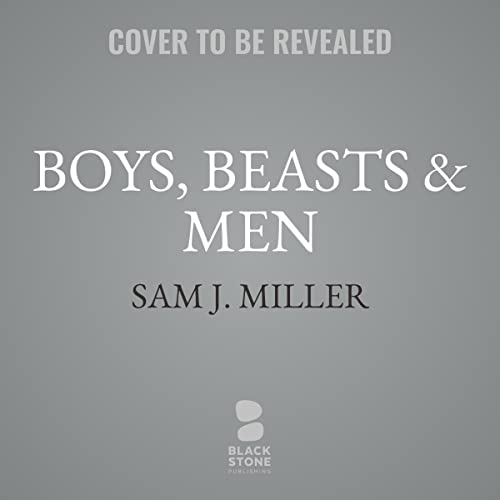 He locks his gaze to mine, this man three bar stools down, and even though it’s what I came here hunting for I can feel my insides quiver with the existential terror of any prey animal.

Worse: he grins. His smile holds so many scenarios: sex, murder, a back room or a dark alley or decades of marital bliss. Stories inside of stories.

Our teacher Mrs. Strunt said the allosaurus coming to Hudson Falls was the best thing that ever happened to Hudson Falls, but the worst thing that ever happened to the allosaurus. She herded us onto the bus looking mad about it, trying to keep us from seeing she was just as excited as we were. The bus was freezing and we had all the windows fogged up in five minutes. Other boys drew curse words. I wrote F-U-C and then flinched, imagining my mother finding out, so I wiped it away and drew an allosaurus.

“The poor thing,” Mrs. Strunt said. “Wherever it came from, it’s got to feel terribly lonely and lost and scared.”

The roads were all madness on the way to the farm. Barely a day since Mr. Blecher made his big announcement, and everyone in the world was coming to Hudson Falls. Scientists and men with giant cameras, and lots of soldiers with lots of guns, but not the mean soldiers and scientists from movies. Everyone I saw had a smile so big it could have been their birthday. Everyone is coming to Hudson Falls, I thought.

And then: a treacherous, wicked, horrible thought.

Maybe my dad will come.

Where had it come from—dad—that foul, forbidden word? I sucked in my cheeks like making a fish face and closed my teeth on as much flesh as I could, and bit down hard. And then harder. Punishing myself. Until I felt the same hot smothering rage that rises up in my mother every time I say that word.

I thought my mother was God, then. Six-foot-something, all flesh and freckles, she towered over our neighbors in church and at the supermarket. She came home from the slaughterhouse smelling like blood. I was nine then, and she could still pick me up, hoist me into the air. Not even the fathers of the other boys my age could do that. She wasn’t afraid of anything.

At breakfast that morning my mother had said, “Day after tomorrow, the army’s going to take it away, and I personally think it can’t happen soon enough.”

I finished my milk and Mom poured me more, which I did not want, which I drank. Mom is certain that the government wants to take our stuff. Mostly our guns. She has a lot of guns and a lot of stickers on her car about them and her cold dead hands. So now I wondered why she wanted them to take the allosaurus.

“Woulda taken it right away, only it’ll take ’em forty-eight hours to scrounge up the right equipment.”

I nodded. Mom drank from the jug and put it back in the fridge.

“Blecher’s going to make out okay, though. Heard he’s got a million in TV deals lined up.” She likes Mr. Blecher because he’s an old, old man, but he can still get over on her once in a while in arm wrestling. “And he’s hidden away some of its droppings to sell to the companies.”

“What kind of companies?”

Mom frowned. “How the hell would I know something like that?”

I wondered what they would do with dinosaur poop. Could you clone something from its poop? Could something so gone forever come back so easily? And if poop worked, what else would? I thought of my father’s baseball cap, the one Mom didn’t know I had, the one that still smelled of his sweat when I crawled to the back of my closet late at night and in total darkness buried my nose in it.

Mom never sits at mealtimes. She made anxious circles through the tiny kitchen, moving refrigerator magnets and removing expired coupons and straightening the cat and dog figurines I could never stop forcing to fight each other. It was a Tuesday morning, which is when my sister Sue calls from college. Waiting for the call always made Mom a little tense.

“What?” she said, kicking me lightly. “Why the face, like I just killed a puppy?”

“You want me to be excited about it. But that thing ain’t right. They got scientists out combing that corner of Blecher’s farm, but mark my words they won’t find nothing. This is something bigger than science.”

“At church yesterday, Pastor said it’s a creature of God,” I spoke carefully, not contradicting, just seeking clarity. I could no longer swing my legs when I sat at the kitchen table. This was a recent development, one I’d been looking forward to that had turned out to be pretty crummy. My feet rested resentfully on the cold tiles. A draft came from under the door.

“Pastor’ll say what needs to be said to help Mr. Blecher out and to get people to come and spend their money in town. Creature of God, my foot.”

Church was the most important thing in my mother’s life, but I don’t think she believed in God. The Hudson Falls Evangelical Lutheran Church gave her lots of things, like friends and a full social calendar and a reason not to go to the liquor store. God didn’t offer her anything extra. Mostly she just liked what Pastor said: the sermons full of blood, fire, and the devil and impending doom, about a world gone haywire and full of sinners and about to be punished.

She heaped bacon on my plate, five then six then seven slices. “‘Fore you know it, there’ll be bunches of them things, running riot over all the world. Eating us all up.”

“I know you saw King Kong, because I saw you crying at the end of it—” and she thumped me on the arm, not hard, because I saw her cry too when the big ape fell— “so I know you know they had Kong tied up good and proper, and he still got loose.”

My sister Sue called then. Mom talked to her for a little while, not sounding super-excited. Mom handed me the phone while Sue was in a sentence.

“Hi,” I said, interrupting her.

“I wish I could come see it, but it’ll be gone soon, right? Did you read the dinosaur books I sent you?”

“Did you just shrug? You can’t shrug over the phone.”

I shrugged again. Then I remembered about shrugging. “I don’t know.”

But I did know. Starting around the time I turned seven, Mom frowned when I talked about dinosaurs. “You get too excited about those things,” she’d say. “Loving something too much is dangerous.” So whenever I got the urge to pick up a dinosaur book or toy, I bit down hard on the inside of my cheek.

The allosaurus was different, of course. It was something you couldn’t ignore or pray away.

“I talked to Dad,” Sue said. Mom was making a lot of noise putting the dishes in the sink. “He’s coming to town to see the allosaurus. He begged his editor to give him the assignment.”

“Do you remember your dad?”

“No.” There was nothing to remember. Some phone calls, sometimes, some letters, and once a box with a birthday present. Mom set it on fire without opening it. Sadness-anger tightened my stomach. I bit my lip to banish it.

“Mom’s . . .” Sue spent a while figuring out where to go with that one. “Mom’s not always thinking straight, when it comes to him.” She knew she had to be careful. After she screamed bad things at Mom, I refused to speak to her for the whole week before she went to college. “I know it seems like Mom’s the toughest chick on two legs, but she’s afraid of lots of things.”

The being-mad-at-Sue didn’t really go away until we clambered down from the bus at Blecher’s Farm. I had been a million times, for church picnics and farm field trips, but had never seen it so full of strangers, people on cell phones, slinging weird devices. The inside of the barn was full of new gates and doors and walls, built quick by the army while they waited for the elephant cage to come from San Diego.

The allosaurus was as tall as two of my mother when it reared up to its full height, but it rarely did. Its usual leaning-forward walk placed it at just the right level to look Mom in the eye. It looked the way it did in books and movies, a tyrannosaurus but smaller, only it had something the movies don’t: a personality. Curious and mistrustful, not particularly smart, a little like a seagull that wants to steal your food.

“The poor thing,” Mrs. Strunt said, looking up at it. It bobbed its head as it walked.

I was glad Mom wasn’t there. I could stand there staring at the thing with what Mom calls my “gape-mouthed imbecile look.”

The allosaurus was anti-camouflaged, wine-colored with long, wide, yellow streaks down the flank. It didn’t need to hide from anyone. The claws were a weird marbled grey I hadn’t imagined. Blood and hay covered the floor. It had been eating; its arms and face were messy from it. It didn’t look lonely or lost or scared. It looked proud of itself, like it had lucked into a lot of food and was waiting to see how things played out.

Mr. Blecher took us on a personal tour, his hands heavy on the heads of the kids he knew from church.

We stood at the edge of the barn, beside the steep railing that penned it in. The allosaurus came closer and someone screamed. Its nostrils snorted smoke into the chilly air. The barn had been there since forever, but the sawdust-and-cement smell of the air gave the place a freshly-built feel that was not reassuring. Only raw wood and new nails kept it away from us. It nudged a bar with its head, its claws a yard from my face, and a whole bunch of someones screamed. Maybe including me. The arms are what make an allosaurus so much better than a tyrannosaurus. Tyrannosaurus is way bigger, but they have stupid stumpy little arms with two claws. Allosauruses have long, ...