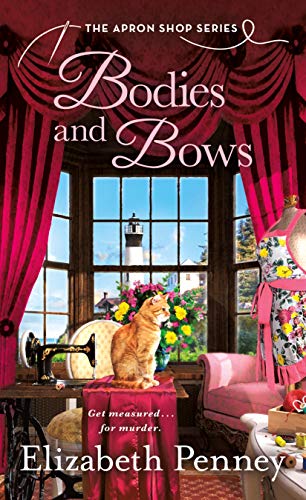 Bodies & Bows is the third in the charming cozy Iris Buckley mystery series set in an apron shop in Maine—Elizabeth Penney will have you on pins and needles...

Iris Buckley is hoping for a bit of rest and relaxation now that the summertime rush is winding down in Blueberry Cove, Maine. Her apron shop Ruffles & Bows has been a huge success, her friendships are stronger than ever, and now she's ready for all of the end of summer cookouts on the beach that she can handle.

But before Iris can even turn on the grill, Bella's latest fling, former Olympian sailor and gorgeous bad boy Lance Pederson is killed in a hit and run while jogging at dawn—and all the evidence points to Bella herself.

Suddenly the month of August isn't looking so restful, since now Iris has been roped into the Lighthouse Rehabilitation Committee, helping her friend Sophie plan a wedding, and—most importantly of all—tracking down a killer and clearing Bella's good name before everything unravels. 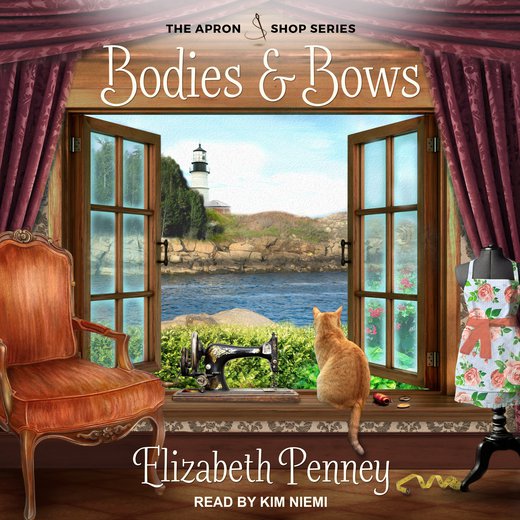 
A loud bloop bloop from the fish tank made me jump, the three-year-old Reader’s Digest almost slipping from my grip. But the pretty angelfish still swam serenely in their underwater lair, showing no concern for any humans waiting to be tortured.

I was at the dentist’s office, alone in the waiting room except for the fish, on a gorgeous morning made for anything but this. Through the big window facing downtown, I could see a deep blue bay dotted with islands. Sailboats and lobster boats tracked across the water, leaving creamy froth in their wake. Summer was almost over, I realized wistfully, and I’d barely had a chance to enjoy it. For good reasons, but still.

A child screamed in a back room, followed by pleading reassurances from his mother and the lower, calmer tones of Dr. Pedersen. “This won’t hurt a bit, Timmy. I’m just going to take a peek. Open wide … that’s a good boy.”

“You’ll get a lollipop if you listen to the dentist,” his mother said.

Twenty years ago that would have been me, cowering in the big chair and staring wide-eyed at the tray of scary-sharp implements. Dr. Oslo Pedersen had been taking care of my teeth since I moved to Blueberry Cove at age eight to live with my grandparents after my parents tragically died in a car accident. I put a hand to my cheek, wondering if the filling that had landed like a chunk of tinfoil on my breakfast plate was one of Dr. Pedersen’s. I don’t have many fillings, fortunately, mainly because my grandmother had limited sweets and stood over me until she could trust me to brush and floss.

Instead of turning back to the magazine, I thought about my to-do list. At nine, Grammie would open Ruffles & Bows, the vintage apron and linens shop we owned together on Main Street. We had fall inventory to unpack, and then, after the shop closed, volunteer duties at the lighthouse.

Tonight, a group of us planned to go through old trunks left behind by the last keepers, who left in the early 1950s when the light was automated. The new lighthouse museum was scheduled to open on Labor Day weekend, thanks to various local fundraisers. Our committee was in charge of creating exhibits depicting life as a lighthouse keeper, and it was shaping up to be a really fun project.

“Iris?” a voice inquired from the doorway.

I looked over to see Gretchen Stolte, dressed in a smock-and-pants uniform. “Hi, Gretchen. I didn’t know you worked here.” Not that I knew her well. She was a recent transplant to the area, an attractive woman with tawny hair and green eyes. Today she wore her hair up, held in place by an antique dragonfly clip.

She gave a soft snort as we started walking down the hallway to the examination rooms. “I’m a licensed dental hygienist,” she said. “Over ten years of experience.”

“Wonderful,” I said, feeling scolded for my innocuous remark. She was one of those prickly people who took offense easily, I remembered.

My glance fell on a photograph depicting a small sailboat heeling over in tumultuous seas, one of many lining the hallway.

“Dr. Pedersen must be so glad to have Lance back in town,” I said, attempting another pleasantry. His son, a world-class sailor and Olympian, had recently retired from the pro circuit with a great deal of fanfare. With his good looks, bad-boy reputation, and outstanding performance, Lance was a media—and local—darling. My friend Bella Ricci had gone on a few dates with him this summer, and the rest of our posse was vicariously enjoying the situation.

Her shoulders stiffened and she sped up, forcing me to racewalk down the carpet. Oops. I’d done it again. Too late I recalled that Gretchen didn’t like Bella, so any mention of Lance would salt the wound. She had gone out with Bella’s ex-husband, Alan, for a while, and when they broke up, she blamed my friend, which was totally unfair. But I had learned that people were rarely rational in matters of the heart.

“Have a seat,” Gretchen ordered when we entered the tiny treatment room. She sat at a narrow desk that held a computer while I set down my handbag and climbed into the big chair. “What brings you here today?”

Why do we always have to repeat medical information despite relaying the problem while making an appointment? With a sigh, I leaned back in the chair and studied the ceiling panels, which displayed an aerial map of the Maine coast. “I lost part of a filling from a right bottom molar this morning. While I was eating breakfast.”

Gretchen clicked keys, bringing up my chart and studying it. “You have one restoration in that quadrant.”

“That’s it.” I obediently opened my mouth when she came to take a peek. I also closed my eyes against the bright light she pulled down to shine right into my face.

She studied my tooth for a long moment and then I felt the heat of the lamp move away. “Dr. Pedersen will be with you shortly. Dr. Peter Pedersen.”

“Oh. I usually have Dr. Oslo,” I said, disconcerted by this news.

“Dr. Peter is taking over the practice due to Dr. Oslo’s pending retirement,” she said, that snippy tone back in her voice. “We’re gradually transferring all the patients over.” That made sense, since Dr. Oslo was well into his seventies. He’d already seemed ancient to me when I’d started coming here.

She bustled out and I was left to wait, my anxiety building with every moment. Even staring at the map on the ceiling trying to find landmarks didn’t calm me. I wanted the procedure to be over so I could get out of here. Lollipop or not.

Hope soared when I heard footsteps, but it was only Mrs. Oslo, clasping a sheaf of files in one arm. “Gretchen—” she began, but seeing the hygienist wasn’t there, she huffed and withdrew before I could ask where her son was.

Finally a tall man with cropped dirty blond hair and a goatee, dressed in a white coat, strode in, Gretchen right behind him. Dr. Pedersen, I presume. He resembled his famous brother in height and facial structure, but while Lance dazzled the eye, the same features were merely ordinary on Peter. Until today I hadn’t really clued in to the fact that Dr. and Mrs. Oslo had another son. Every family picture in the office featured Lance.

He peered at my chart then at me. “Iris? I’m Dr. Pedersen.” Without waiting for an answer, he handed the chart to Gretchen then reached for the lamp. “Open wide for me.”

I closed my eyes again, and so it began. After examining me with hums and muttered exclamations, he injected my gum with something that numbed the whole right side of my mouth. Saliva pooled immediately, and I prayed I wouldn’t choke on my own spit. How often did that happen? I wondered.

“So, Iris, where do you work?” He asked this and a variety of other questions I couldn’t answer while he fiddled about, drilling and packing and probing.

When I finally dared to open my eyes, they were both staring down at me with serious expressions. Why do dentists do that? “Am I okay?” I asked, trying to push myself upright.

Dr. Pedersen patted my shoulder. “You’re fine. Lovely set of teeth.” He handed me a piece of articulating paper. “Bite for me, please.”

Soon after, I staggered out into the sunshine, blinking, my mouth still numb and my bank account quite a bit lighter. Halfway across the parking lot to my car, I noticed Lance, shirtless and in shorts, rinsing down his Porsche with a hose. The Pedersens lived on the property, with the dentist’s office in one wing of a huge Colonial house. At the back of the paved area used for parking stood a former carriage house, now a four-car garage.

I mumbled something, my lips still not working right. But between my mouth gaping open and the drool, I probably looked like ninety-five percent of the women he encountered. Trying to smile, I fumbled for the keys to Beverly, the white ’63 Ford Falcon my late grandfather had restored for me.

Lance whistled. “Nice car. Maybe you can take me for a spin some time.”

My face flamed with heat, despite knowing that he was only being friendly. It wasn’t his fault that he was sex on a stick, as my bestie Madison called him. Besides the fact that he was dating another friend, Bella, I was also very happily seeing someone, a great-looking carpenter named Ian Stewart. Rather than respond, I settled for a wave and climbed into my car. By the time I was backing out of my space, he had the hose spray on again and was intent on washing down the headlights.