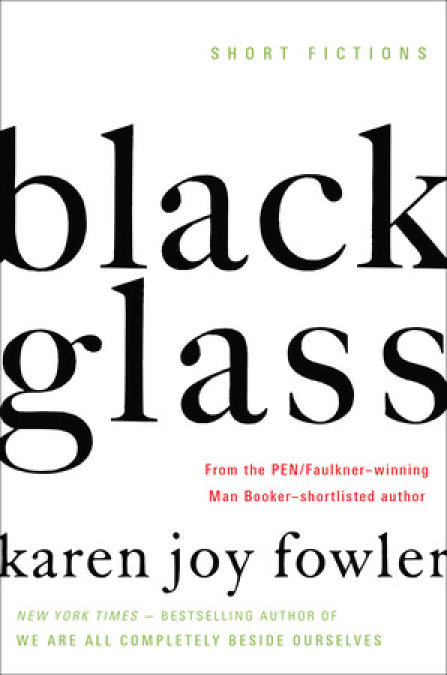 First published in 1998 to high praise, and now reissued with the addition of a prefatory essay, Black Glass showcases the extraordinary talents of this prizewinning author. In fifteen gemlike tales, Fowler lets her wit and vision roam freely, turning accepted norms inside out and fairy tales upside down—pushing us to reconsider our unquestioned verities and proving once again that she is among our most subversive writers.

So, then: Here is Carry Nation loose again, breaking up discos, smashing topless bars, radicalizing women as she preaches clean living to men more intent on babes and booze. And here is Mrs. Gulliver, her patience with her long-voyaging Lemuel worn thin: Money is short and the kids can’t even remember what their dad looks like. And what of Tonto, the ever-faithful companion, turning forty without so much as a birthday phone call from that masked man?

It is a book full of great themes and terrific stories—but it is the way in which Fowler tells the tale, develops plot and character, plays with time, chance, and reality that makes these pieces so original. 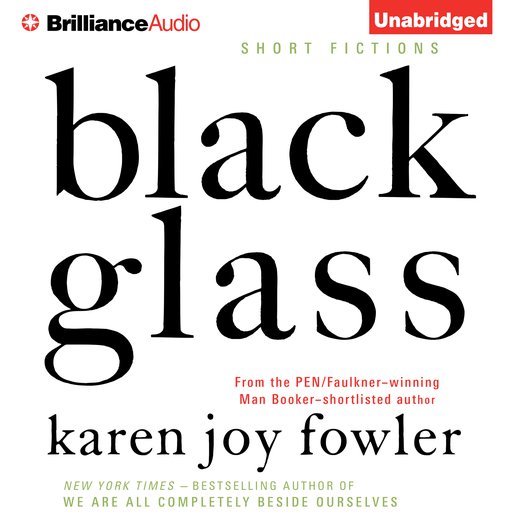 It was a Wednesday afternoon in the Senate Bar.  Schilling, the proprietor, stood behind the curved counter, stroking the shot glasses with a towel.  Every part of the bar was reflected in the mirror wall behind him: the marble and black onyx floor, the oiled cherry-wood counter, the brass bar rail.  A chandelier hung in the center of the ceiling.  Rows of cut-glass decanters filled the shelves.  Schilling ran his towel over their glass stoppers.  In the corner, on the big screen, Cher danced and sang a song for the U.S. Navy.  Schilling had the sound off.

There were three customers.  Two sat together at a table near the door.  They were businessmen.  One of them smoked.  Both of them drank.

Every time either of them picked up his glass and set it down again, he made a new wet ring on the table between them.  They were careful to keep the spreadsheet out of the water.

The third customer, a college student, sat at the bar, drinking his way through an unexpected romance with a  woman old enough to be his mother.  He'd asked Schilling to bring him three drinks at once, three different drinks--a Bloody Mary, a Sex on the Beach, a Velvet Hammer.  As a compromise, Schilling had brought him the Bloody Mary and put in a MTV tape, picture only, out of deference to the businessmen and as a matter of personal preference.

A fourth man came into the Senate Bar from the street.  A shaft of sunlight sprang into the room when the door opened and vanished when it closed.  "Give me a drink," the man said to Schilling.

Schilling glanced at the man briefly as he polished the wood bar with his sleeve.  "Get out of here."

The man was dirty and dressed in several tattered layers, which still left a bare hole the size of a tennis ball above one knee.  He was smoking the stubby end of a cigarette.  It was not his cigarette; there was lipstick on the filter.  He had retrieved this cigarette from the sidewalk outside the bar.  "You pay your tab first," said Schilling.

"I don't have any money," said the man.  Cher closed her eyes and opened her mouth.

"Where's my Sex on the Beach?" asked the boy.

"You're disturbing my customers," Schilling told the man at the door.  "You're stinking up my bar." He reached under the counter for a bottle of gin.

"He gave me my first drink," the man at the door said to the boy at the bar.  "I used to be just like you." He took two steps into the room, leaving two gritty footprints on the black onyx.  "Finish what you started," he told Schilling.

"Get out," Schilling said.

A second shaft of sunlight appeared in the room, collided with the mirrored wall.  Inside the sunlight, barely visible, Cher danced.

She turned her back.  Schilling heard a woman scream, and then the Cher in the mirror broke into five pieces and fell behind the counter.  The sunlight disappeared.  "Madam," said Schilling, hardly breathing, in shock.  A nightmare dressed in black stood at the door of his bar, a nightmare in the shape of an enormous postmenopausal woman.  In one hand she held a hatchet.  She reached into the bodice of her dress with the other and pulled out a large stone.  She wore a bonnet with black ribbons.

"Glory be to God!" shouted the woman.  "Peace on Earth! Goodwill to men!" She hit the big screen dead center with the rock.  The screen cracked and smoked, made spitting noises, blackened.  She took a step, swept the cigarette from the shabby man's mouth with one hand.  "Don't poison the air with your filthy gases!" she said.  Then she held her hatchet at the vertical.  She charged into the bar, clearing the counter.  Maraschino cherries and stuffed olives flew.  "Madam!" said Schilling.  He ducked.

"You purveyor and protector of obscenity!" the woman shouted.  "Has your mother ever been to this place?" The boy at the bar slipped from his stool and ran for the rear door.  In three steps the woman caught him.  She picked him up by the neck of his sweater as if he were a kitten, throwing him to his knees.  She knelt over him, singing.  "Touch not, taste not, handle not. Drink will make the dark, dark blot." He struggled, and she let him go, calling after him, "Your mother did not raise you for this!" The back door slammed.

The businessmen had taken cover under their table.  Schilling remained out of sight.  The shabby man was gone.  The woman began, methodically, with her hatchet to destroy the bar.  She punctured the decorative keg behind the counter and then, apparently disappointed to find it empty, she brought her hatchet down on the counter, severing a spigot from one of the hoses.  A fountain of soda exploded into the air.  She broke the decanters.  Pools of liquor flowed over the marble and onyx floor.  The woman's bonnet slipped to the side of her head.