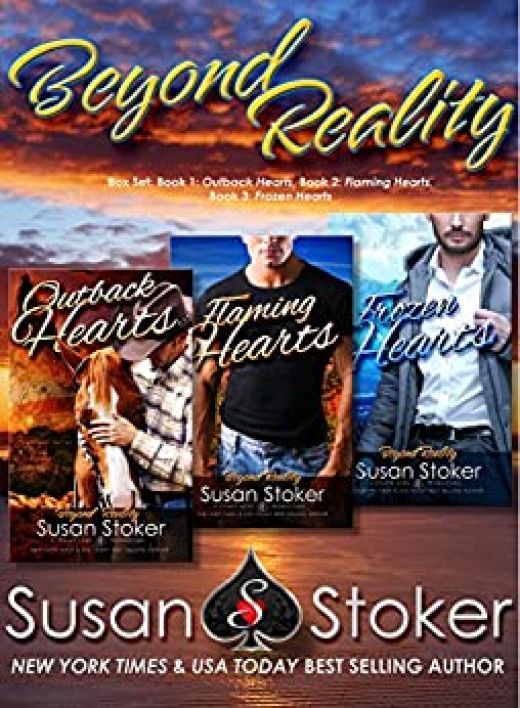 Collect the entire Beyond Reality series in a complete box set. 600+ pages of exciting reading all in one convenient low-priced. package.

OUTBACK HEARTS (#1)
Sam never thought she'd actually be chosen for a reality show--but the next thing she knew, she was whisked away to Australia. Dealing with a producer willing to do whatever he had to do make the show a hit, other women ready to cheat and lie to gain the attention of the bachelor, and a camera operator ready to catch her at her worst every time she turned around, absolutely nothing was as simple as it seemed on TV. Sam wasn't sure she was going to make it through filming most days--never mind find true love.

Alex never thought he'd be on a reality show, but how hard could being surrounded by beautiful women be? A lot harder than he'd thought. The producer changed the rules of the show behind his back, the women were nearly clawing at each other for this attention--and then there was that one contestant he couldn't get off his mind.

Can two people who are meant to be together manage to fight catty contestants, a crazy producer and find true love on a reality show in the Australian Outback?

FLAMING HEARTS (#2)
Becky is on a reality show in Arizona, but instead of having the single men compete with each other for her affections, she has to compete with another woman for theirs. While on a disastrous double date for the show, Becky meets a wonder man, too bad she's not allowed to talk to him.

Dean finds the one woman he knows is meant to be his, but there's a problem, she's a contestant on a reality show. Working with his brother, who just happens to be a cameraman on the show, they put together a scheme to get Dean access to the set. Now all he has to do is convince Becky to choose him.

Their relationship blossoms, but when trouble arises, Becky has to decide if she can trust Dean enough to help her, or if she's better off alone. Dean would do anything for the woman he loves, but first he has to find her.

FROZEN HEARTS (#3)
Working as a camper operator for a hard-nosed producer isn't all fun and games. Kina is seriously thinking about making this reality show her last. She's known as being 'cold-as-ice' when it comes to men, which is appropriate since they're filming in Alaska. Before she can figure out what she wants to do with her life she had to make it through this show.

The Alaskan reality show is Jonathan's last gig before he goes to work in security with his brother. The shoot would be completely miserable except for the fact that the one woman in the world who is meant to be his is also a camera operator on the show.

Fighting boredom and drama within the crew, hiking across glaciers, and camping in the Alaskan wilderness isn't as safe as it seems on television. An injury on the set will either bring Jonathan and Kina together, or tear them apart for good.