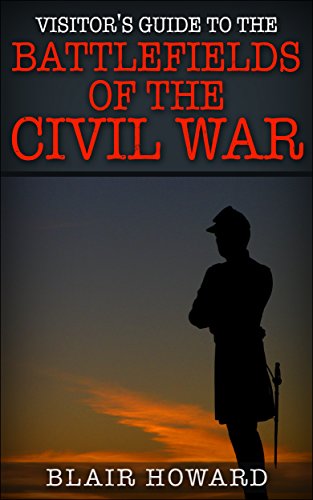 Battlefields of the Civil War Vol 1

"A practical guide to what took place at the great battlefields of the Civil War and how to tour them now, either on foot or by car, with details on the museums, nearby attractions and activities. Each battle is brought to life, along with the personalities of the men who fought and died there. Covers the battles of Manassas, Shiloh, Antietam, Fredericksburg, Gettysburg, Vicksburg and more. About as good as battlefield guidebooks get, which is very good indeed." (The Bergen Record)

From 1st Manassas on the Bull Run river to Appomattox Court House, from Shiloh to Chancellorsville, and from Gettysburg to Antietam, Chickamauga, Vicksburg, and Fredericksburg, the great battles of the Civil War have all become household names, names that stir the blood and conjure a thousand images of heroism and despair.

But while almost every American is familiar with the most famous of our great fields of war, it should be remembered that the conflict was fought over many such battlefields, some only a shade less well known than their much-publicized counterparts, and many more now long forgotten but nonetheless important to the fate of the nation.

The American Civil War has, over a century and a half, taken on a new appeal. The stories of individual heroism, desperate battles, and great men have passed into legend. Today, all that remains to remind us of those dreadful days so long ago are a few acres carefully set aside and dedicated to the memory of those who died there – quiet places where one can be alone, close to the men whose names ring out as clearly today as they did in the throes of fearful conflict: Lee, Jackson, Sherman, Grant and a hundred more.

The battles that helped to shape the nation continue to hold our attention. Every year thousands of people flock to the one-time killing fields to watch as the generals and their armies meet again in realistic re-enactments of those terrible contests.

The Eastern United States, from Washington to Key West, from Savannah to Kansas City, contains a wealth of Civil War sites and military parks. They are all pleasant spots where one can go to spend an hour or two away from the hustle and bustle of city life or a quiet afternoon out with the kids.

Unfortunately, very few of the people who do take the time to visit these magical places have any real idea of their significance and they know even less of the monumental events that took place there. It is hoped that this book will help to change all that.

Within these pages you will find the stories behind some of our nation's battlefield parks and historic sites, many well-known, others less familiar, and some that are well off the beaten path.

By telling the story of the action as it took place, by bringing back to life many of the principle characters, and by the telling of the deeds they performed while under the greatest stress imaginable, I hope to make your visits to these special places much more enjoyable and rewarding. You will, I hope, leave them with the feeling that your afternoon in the sunshine was much more than a simple picnic and that you are a little richer for the experience.

The book is designed as a guide to your chosen “Field of Glory.” Read it as you tour the battlefield. Ponder the great events that took place there – events that surely changed the face of our nation.