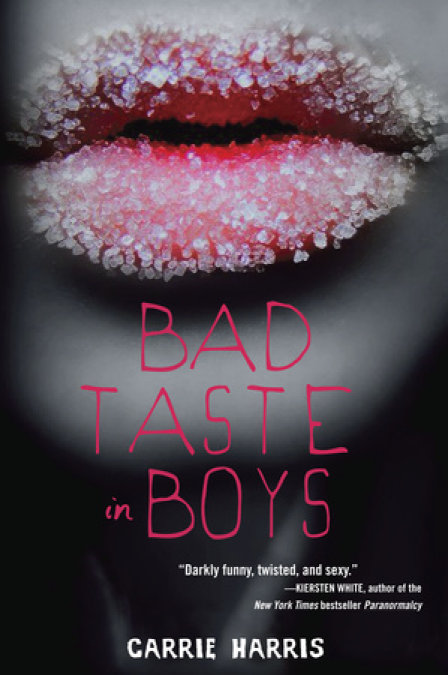 For fans of Buffy the Vampire Slayer comes a teenage zombie assasin who is taking on the humor and horror of high school one monster at a time.

Kate Grable is horrified to find out that the football coach is giving the team steroids. Worse yet, the steriods are having an unexpected effect, turning hot gridiron hunks into mindless flesh-eating zombies. No one is safe--not her cute crush Aaron, not her dorky brother, Jonah . . . not even Kate! She's got to find an antidote--before her entire high school ends up eating each other. So Kate, her best friend, Rocky, and Aaron stage a frantic battle to save their town  . . . and stay human.

“You’re one of those genius types,” said Coach, nudging me with a beefy elbow. “Make yourself useful for once. Say something inspirational.”

Morning football practice had just ended and I was standing in a hallway that stank of sweat and industrial cleaner, holding the door while the varsity team hauled their pitiful butts into the locker room. As the student trainer, I handled random sprains and strains, and in my spare time I pushed Gatorade like it was the nectar of the gods. But motivating the worst football team in existence? Couldn’t do it.

The only thing I could think of was “Look! Naked cheerleaders!” Not exactly appropriate.

“What do you want me to say?” I asked, shifting away from him. “They don’t suck?”

I wasn’t trying to be insulting, just honest. Earlier one of our linebackers had given himself a bloody nose by falling on his own fist, and it had gotten worse from there. Now our players looked so depressed that I thought they might commit hara-kiri.

Aaron Kingsman, the starting quarterback, trudged past. He usually nodded at me, and once he even smiled. Sad but true: that smile was the highlight of my junior year. Today he didn’t even look up. He had a little cut above his right eyebrow, a bead of blood poised at one end. I wanted to give him first aid but couldn’t find a way to make the offer sound reasonable. I had to say something, though.

“Nice hustle out there!” I bleated, blinking behind my glasses. They were a holdover from my formerly one-hundred-percent geeky self. Now, thanks to my friends and some expensive antifrizz conditioner, I was only fifty percent.

Aaron hunched over farther and pushed through the door.

“Way to step up, Grable.” Coach made his best attempt at sarcasm. It wasn’t one of his strong points. “Put this stuff away, at least, will ya?”

He handed me the keys to his office. They were on a ring the size of my steering wheel. I had no idea why one man needed so many keys. I’d counted them once: ninety-one and a half--one was broken. That key ring was heavier than I was.

Coach launched into his usual load-of-rubbish postpractice speech before the locker room door closed, leaving me in the hallway with an entirely different load of rubbish: the Gatorade cart, clipboard, keys, and the first-aid kit. I performed my usual juggling act down the hall: push the cart two feet, drop the key ring, pick it up, lose the clipboard in the struggle, retrieve the scattered paper, push the cart another two feet, reassemble the clipboard, nearly knock the Gatorade over, and so on. On days like this, I had to chant “Kate Grable, MD” to keep from quitting. All the annoyance would be worth it when I got into a pre-med program next year.

“Kate Grable, MD. Kate Grable, MD.” Coach’s office had one of those perennially malfunctioning fluorescent bulbs that infested our school. I didn’t risk turning it on, because I was an epileptic. I hadn’t had a seizure in almost a year, but before that I’d had them practically every week. It was a force of habit to avoid things that might trigger them. Flashing bulbs had always been a guaranteed ticket to seizuretown.

I propped open the door, put the clipboard on Coach’s desk, and flipped through a million keys before I found the right one for the med cabinet. I had to put away Mike Luzier’s EpiPen. Mike had a bee allergy and the mental capacity of a newt. We weren’t supposed to leave the Epi out at night; Coach seemed to think there was a serious black-market epinephrine trade.

When I was putting the Epi in the cabinet, I noticed an unfamiliar rack of medication vials on the top shelf. The labels were blank, which instantly set off my med-geek alarm. I labeled all our drugs, and I was quite proud of my cataloging system. Even Coach could find his way around the cabinet, and he had problems following directions. Heck, he had problems reading words of more than one syllable.

I picked up the rack and a used syringe tumbled out. I yelped as the needle landed in the toe of my shoe. Carefully I extracted the needle and wrapped it in a big wad of paper towels. Coach had an ancient dispenser in his office; it squealed loud enough to raise the dead.

I wasn’t sure what to make of this. Our trainer, Dr. Ho, was in charge of delivering and dispensing team meds. Everyone forgets things once in a while, but there was no way he’d leave a syringe uncapped. And Coach was the only other person with access to the med cabinet.

“Holy crap, are these steroids?” I whispered, staring down at the lump of towel in my hand. If the meds were legit, the Ho would have given me the rack for check-in. Legal drugs don’t require secrecy and unmarked vials. I was pondering this when I heard the boom of the locker room door as it flew open and hit the wall.

I knew what that sound meant: Coach was coming. I slammed the office door to buy some time, vaulted the desk with more physical prowess than I knew I had, and shoved the rack back into the cabinet.

Duh. The door had one of those automatic locks, which meant the desk vault had been completely unnecessary. I took a deep breath and turned the handle.

“Hey, Coach!” My voice was so perky that I wanted to punch myself.

“Grable.” His eyes flicked over to the cabinet on his way in. It happened so fast I almost thought I’d imagined it.

“Clean up your crap, will ya?” he said, sitting down at his desk and scowling at the wad of paper towels. He picked it up, and I half expected him to stick himself with the needle, but apparently he was a lot luckier than I was.

He gave me an odd look before dropping it into the wastebasket at his feet. There went my evidence. I wasn’t going to go Dumpster diving for it, though. Reforming geeks like me avoided Dumpsters at all costs.