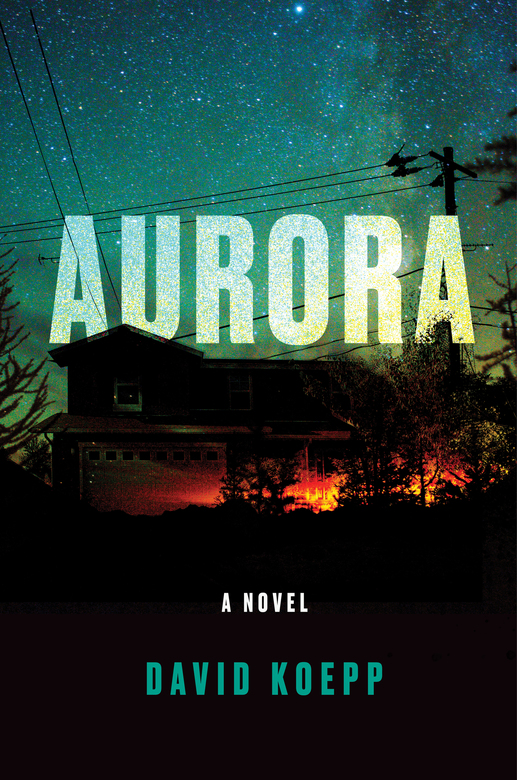 From the author of Cold Storage comes a riveting, eerily plausible thriller, told with the menace and flair of Under the Dome or Project Hail Mary, in which a worldwide cataclysm plays out in the lives of one complicated Midwestern family.

In Aurora, Illinois, Aubrey Wheeler is just trying to get by after her semi-criminal ex-husband split, leaving behind his unruly teenage son.

Then the lights go out—not just in Aurora but across the globe. A solar storm has knocked out power almost everywhere. Suddenly, all problems are local, very local, and Aubrey must assume the mantle of fierce protector of her suburban neighborhood.

Across the country lives Aubrey’s estranged brother, Thom. A fantastically wealthy, neurotically over-prepared Silicon Valley CEO, he plans to ride out the crisis in a gilded desert bunker he built for maximum comfort and security.

But the complicated history between the siblings is far from over, and what feels like the end of the world is just the beginning of several long-overdue reckonings—which not everyone will survive . . .

Aurora is suspenseful storytelling—both large scale and small—at its finest. 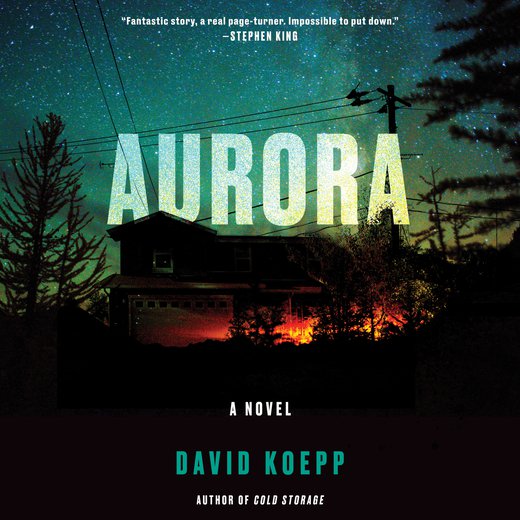 Aubrey Wheeler looked down at the chipped paint on her fingernails and wondered when the last time was that she considered a man attractive. It certainly wasn’t now, and it definitely wasn’t either of these two guys.

The conference had been in Kansas City, but not even the good Kansas City, whichever one that was supposed to be. Whichever-the-hell Kansas City she’d had to go to was five hundred inconvenient miles from Aurora, a distance that translated into either an eight-hour drive for a six-hour conference or an overcrowded flight on a shit airline. She’d chosen the flight, on a no-frills carrier that didn’t assign seats, and after a free-for-all at boarding, she’d ended up in a middle spot between two ex-high-school-football types whose concept of personal space was that her space was for their person. Having no intention of staying stressed and angry for the whole ninety-minute flight, Aubrey had popped a Xanax far too early in the day and was now driving home from O’Hare foggy, crabby, and vaguely depressed.

Actually, her depression wasn’t as vague as all that; it was quite focused and specific, because she was headed back into the lion’s den. She remembered, barely, the days when business travel used to leave her somewhat invigorated and refreshed—days when it had been a chance to get away from Scott and Rusty for a decent stretch, to sleep better and longer and read and eat whatever she wanted, without worrying about whether anybody else would want to eat it too. But those days were long gone. Gone in the dust of COVID, gone along with her peace of mind, the better part of her thirties, and her marriage.

Before the pandemic, the conference business she’d started and run had done fairly well. But overnight, the number of people who were willing to sit in a windowless air-conditioned room with five hundred strangers dropped to nothing, and Aubrey was forced to contemplate bankruptcy within months. She’d furloughed the entire staff. But three nights later she awoke in the night with a Genius Idea, a revelation that was not-so-slowly dawning on the rest of the business community at the same time. Namely, why do I ever have to leave my house again? She’d pivoted the company to an all-Zoom platform in seventy-two hours and hired back half the staff within a week. By the end of the first year in their new configuration, they had nearly as many employees as in their heady pre-plague days. And more clients than ever, who were willing to pay as much or more for the convenience of attending a conference from the comfort of home. Sure, some morons had eventually insisted on holding in-person conferences again, hence her deeply resented trip to Missouri-or-Kansas, but ninety percent of their work was now online, and profitable. She’d even managed to resume pulling a decent salary, which was an enormous relief to Rusty, as he was a shit and a vampire.

Were those words cheap slurs? You bet! But they were also accurate descriptors that summed up the two dominant aspects of her ex-husband’s personality. Rusty was a “shit,” used in the classical sense of “waste matter expelled from the body,” because he had been an enormous misuse of her time, resources, and love. And as of two years ago, she had most definitely expelled him from her body. He could also be accurately described as a “vampire,” if one took the word to mean “a person who preys ruthlessly on others.” You could even go so far as to call its primary definition—“a monstrous bloodsucker”—appropriate, because Rusty had drained the spirit and energy out of Aubrey ’til she felt hollow, like an empty suit coat splayed open on the floor.

She knew it wasn’t all his fault. She remembered vividly what he’d been like when they’d first met. He was strong and he knew it, in all the ways that confidence is attractive and none of the ones in which it’s ugly. He radiated strength and authority, not with gross bravado but in a quiet I-am-possessed-of-a-power-that-I-need-not-use kind of way. Rusty was a general contractor, a good and honest and successful one. Aubrey had always used her mind for work, and she liked the idea of somebody who used their hands for theirs. Best of all, her husband had been the polar opposite of her older brother—Rusty was unserious, physical, and grounded. She’d loved him until he became unlovable.

The last few years Rusty’s drinking reached blackout level—which had apparently been the issue in his first marriage, and thanks so much for telling me, Cheryl Anne—and in the end that made it easy for Aubrey. Or easier, anyway. The guy she’d loved wasn’t there anymore, and this new guy wasn’t welcome. Slowly at first, and then seemingly all at once, the guy she thought she knew was into booze, drugs, rages, long hours lost playing poker, and she was fairly certain he was getting involved in some sort of minor crime; odd sorties at all hours to do God-knows-what with some sketchy buddy of his. No, Rusty had to go, so out he went, out of the house they’d bought together and out of the life they’d planned in such careful detail.

But the twist in the story, the kicker, the sting in the tail, as they say, was that Rusty didn’t take all his stuff with him when he went. He left Scott behind.

He didn’t actually leave Scott; it was more that Scott stayed. Rusty’s son from his first marriage was fourteen at the time, old enough to get into trouble, which he did, old enough to know that his mother lived too far away and didn’t care enough to take care of him, which she didn’t, and young enough to think that if he could just make a few smart choices about his life, he could free himself from the shit cycle of neglect and substance abuse that had consumed both his parents. Outcome pending on that third one.

Because they were both men, and Midwestern ones at that, Scott and Rusty didn’t sit down and actually discuss a new living arrangement. It was more that they came to realize it in each other’s presence at about the same time one morning. Specifically, that moment was fifteen minutes after Rusty had told Scott, “Get your shit and be downstairs. We’re leaving.” Scott did not get his shit or go downstairs.

Rusty looked up the ancient, rickety staircase that had been first on his punch list for four years—he was for suregonna get to that one—and shouted. “You coming or what?”

Scott shouted back, through his closed bedroom door. “Fuck off.”

Rusty turned and looked at Aubrey, who was slouched sideways in the kitchen door, half in and half out, as if there were no room she wanted to be in right now.

Aubrey just glared at him. Give me a break.

Rusty turned back to the stairs and yelled up to Scott again. “You stay now, you’re staying for good.”

At this point, some teenagers would have shouted something incoherent and slammed the door. Others might have cranked up the volume on something by Death Grips, a rap group rivaled in their abrasiveness only by the sound of someone chewing aluminum foil in your ear. But Scott Wheeler just opened his door, walked to the top of the stairs, looked down at his father, and touched his forehead with two fingers of his right hand in an insouciant goodbye salute.

Rusty picked up his bag and left.

At 10:47 that morning, Aubrey had been thirty-six, childless, newly single, and ready to accept whatever exciting adventure life held in store for her.

Hey, life, that wasn’t what I fucking meant.

It was home to Scott that Aubrey now raced. It was just after one in the afternoon, which meant if she hurried and traffic didn’t conspire against her, she’d be at the house by two, plenty of time to toss Scott’s room before he got home from school. She’d arranged for him to stay at a friend’s for the two nights she was gone, but she’d had no illusions about his true intentions, which had almost certainly been to spend the night with Caprice in the Aubrey-less house on Cayuga Lane. Scott had turned fifteen six months ago, too young to give up one’s virginity, in Aubrey’s opinion, but that was between him and his consenting partners. It was the substances she was concerned about.

Both of Scott’s parents were drunks. Genetics were squarely lined up against the young man, and Aubrey had no intention of letting him fall down that dark hole on her watch. A week before the trip, she’d set up three Zmodo surveillance cameras throughout the house, connected by Wi-Fi to an app on her phone she could access with any decent signal. One camera had gone in the kitchen, hidden in a stack of cookbooks, one in the living room, stashed among a tower of neglected board games, and the third hidden among the dozens of unread books on Scott’s bedroom shelves.

Aubrey had quickly shut that one down, after a test run a few days before leaving nearly seared her eyeballs with the image of a perfectly normal adolescent function that she had somehow failed to consider. Look, it hadn’t occurred to her, OK? She’d never been a teenage boy. In the end, the video system had proved worthless, unless she was actually in the house and on Wi-Fi. As soon as she was in the car and on her way to the airport, ...