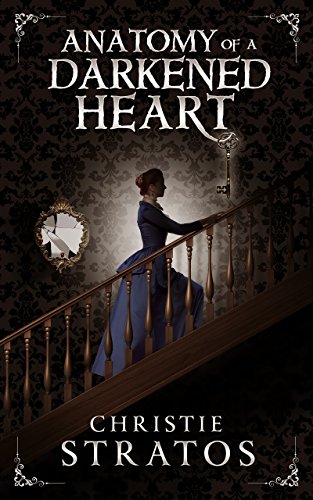 The only way to survive the Whitestone family is to escape them.

Abigail Whitestone is the eldest of the three Whitestone children—and the most tormented. The room darkens and time seems to stop when she is born, but is it really her fault? Is she as evil as Mother insists, or does it forebode a life of abuse and cruelty?

With only one positive influence in her life—that of her nanny—Abigail tries her best to stay out of Mother's way. But Mother always seems to be present when there's a chance to hurt. And Father is no use at all.

If she could just keep the attentions of the wealthy and handsome Conrad Scott until he proposes, he could be her lifeline.

But after a violent accident and a disturbing series of events that permanently warp Abigail's mental state, she finds herself drawn to stay in the very home of her abuse, and she'll do anything to force her siblings to stay too—anything.

Anatomy of a Darkened Heart is the first psychological suspense novel in the dark and twisted, fast-paced Dark Victoriana Collection.

In the Dark Victoriana Collection, no one goes unscathed.

Anatomy of a Darkened Heart (Book1)

Thou feedest them with the bread of tears; and givest them tears to drink in great measure.

It was in the very moment of her birth that the ambiance changed. Everyone felt it. The room darkened, blackened to the point that the midwife paused, the baby still half inside her mother, to look around, frowning deeply. Elizabeth's heartbeat quickened.

"The clocks…" the midwife muttered. They had stopped. There were two in the room, and they'd both stopped ticking simultaneously. The midwife looked right into Elizabeth's eyes with an expression that was half apologetic and half frightened. Clocks were only physically stopped—not supernaturally—when someone died or while mourning the deceased. But now the clocks had stopped by themselves, and nobody had died. Unless…

"Is the baby all right?" Elizabeth shrieked, leaning forward as much as possible. She was covered in cold sweat and exhausted and scared.

The midwife suddenly remembered to continue with the birth and gently helped the baby out the rest of the way. It made no sound.

"Is it alive?" Elizabeth was frantic now. This was her first child and if it was stillborn… The midwife wasn't answering. She was just staring at the baby. Elizabeth couldn't even see it. "Is it alive!" she yelled.

"It's alive," the midwife said quietly. She wiped blood off of it slowly as if under some sort of spell. "It's not crying yet, though." She rubbed its belly and it made a sound like recognition, like an annoyed grunt. But it didn't cry. And then the clocks started again with a hard tick, but neither woman noticed.

"Is it a girl or a boy?" Elizabeth asked. She was getting irritated now. What was wrong with this midwife?

The midwife looked at her again, that same look on her face, this time with more worry than fear. "A girl," she whispered.

"What's wrong with you? Give her to me!" Elizabeth couldn't take it anymore. This woman wouldn't tell her why she was making that dreadful face and she wasn't giving information freely. They would complain about her. She'd have Richard do it.

"I-I'm sorry. I didn't mean to… It's just that… Well, here." And with that, the midwife stood up, took two long steps around the bed, and harshly held the baby out. Elizabeth took her, not really seeing while she concentrated on taking hold of her properly.

As soon as the little girl was in her arms, against her body, Elizabeth saw it. Tired eyes. Eyes like an adult—an unhappy adult. The blue eyes were like big round teardrops, wide and evaluating, searching for something. Under the bright blue eyes were circles, light gray circles that threatened to darken. Those tired, striking eyes weren't closed or roaming, they were focused on Elizabeth's eyes. It felt as if something was connecting their pupils so that neither of them could look away and neither could blink. Elizabeth felt a sudden strong sadness, loss, disconnect. Something wasn't right with this child. It couldn't be. Children weren't like this. But then again, who's to say they couldn't be? It wasn't squirming either. It just lay there limply and stared into her eyes.

Elizabeth had planned to name the child Mary Judith but couldn't bring herself to do it after the clocks stopped, after she'd seen its eyes. They were so strange, those eyes. She couldn't get over how tired the baby looked. It couldn't be normal…

Richard didn't have any interest in the name, so it was up to Elizabeth. Whatever she wanted, he'd said. Anything was fine, he'd said. She knew he wanted a boy. She asked the midwife what his reaction had been when she'd told him it was a girl. The midwife gave her a small, tight smile, a smile that looked like a stretched-out jumprope in the middle of play, and then looked down. He wasn't pleased.

Elizabeth knew she had plenty of time to name the baby before it was baptized in four weeks. There was something unsettling about having a living being in the house with no name attached to it. Or perhaps it was just this baby that unsettled her. Perhaps the first should be their last… But she already knew Richard wouldn't accept that. He wanted a boy, and if he wanted it, he would have it.

He hadn't seen her since the birth, hadn't come to visit or even sent a note in with the midwife. Nothing. She felt empty, lonesome, with just this odd, tired, quiet child to keep her company. Actually, there was now a nurse milling about to take care of it while she rested, but she didn't see too much of either nurse or baby. She couldn't even accept visitors for two more weeks. That was a long time to sit in bed, alone. It was a long time.

But back to the name. What should she call it? Elizabeth breathed deeply and pulled the covers up further. She was half sitting, half lying slouched in bed, pillows messily spread out behind her. She liked the covers all the way up to her shoulders. It was October and chillier than usual. A weak fire crackled in the fireplace across from her bed. She wanted tea, boiling hot tea to hold in her hands, against her chest so she could feel the steam rise up to her chin.

The name came to her suddenly, just popped into her mind like it was meant to be. Abigail.

Did she know anyone named Abigail? Or was it a name she recalled from her Bible readings? Well…honestly…she didn't read it often, if at all anymore. Her memory was terrible, so whenever anyone quoted from the Bible, she smiled and nodded piously, as if she knew exactly where the quote came from, as if she could remember all those pages word by word. She was supposed to know them. She didn't.

Abigail was a good woman, she thought. A wife, twice. Perhaps if the first name represented someone decent, a woman with morals, the child would follow suit.

But Richard's distance from this child made Elizabeth want to do something to make him sorry he wasn't taking an interest. It would satisfy a loving, warm side of her that was always being pushed down by him. A little secret her daughter may never understand, but Richard certainly would. It could be something Elizabeth could call her when she was frustrated with Richard. Perhaps she could force him to care that way, so she could say, "You should have taken more of an interest in our daughter when she was first born. If you'd only done that…" and she could finish that sentence whatever way suited the situation.

Delilah was a lovely name, a name that carried betrayal of a man. It was perfect. It was Elizabeth's permanent private revenge.