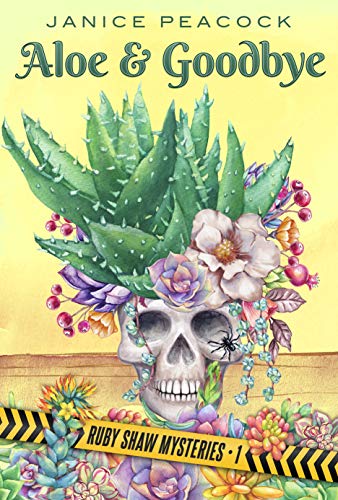 After being placed in witness protection, Ruby Shaw and her daughter move to the former ghost town of Paradise, Arizona, which is nothing like its name implies. The US marshal handling their case has this advice: Fly under the radar—but that's difficult to do after their neighbor is murdered.
====================
New Yorker Ruby Shaw arrives in a hillside town in Arizona with a brand-new name, a duffel bag on her shoulder, and her daughter, Allie, at her side. Before arriving, Ruby witnesses a murder that lands her in the witness protection program. That decision means she's gone from being a successful artist to being a nobody in a postage-stamp-sized town called Paradise—a name that doesn't fit the former ghost town. Even though their new digs are a little shabby, and there may be ghosts haunting the town, they are optimistic about their new lives, that is, until a neighbor turns up dead.

Having just arrived in town, living next door to the victim, and without an alibi, the community members are suspicious of Ruby. A local deputy befriends her, but the deputy still points to her as the culprit each time they find a new clue. If matters weren't bad enough, Allie is having trouble fitting in at her new school, and Ruby can't seem to hold down a job.

As they settle in, they meet the quirky inhabitants of Paradise: Bette—the chatterbox café owner, Flora—Allie's eccentric babysitter, and Derek—who runs local history tours, which he jazzes up with ghost stories of questionable veracity.

Ruby's life improves when she meets a handsome cook at the local café who is passionate about succulents and cacti, and may feel equally passionate about her. Even though Ruby and Allie want to stay in Paradise, a US marshal has other ideas, as he threatens to move them to a new town after Ruby gets mixed up in the murder investigation. Ruby must find the killer before she and Allie lose their new home or even worse—their lives.
====================
Purchase Aloe and Goodbye to find out what happens to Ruby and Allie who must hide their true identities as they face unexpected challenges—the murder of a local real estate maven, fake ghosts, and missing feral cats—in their newly-adopted town of Paradise.