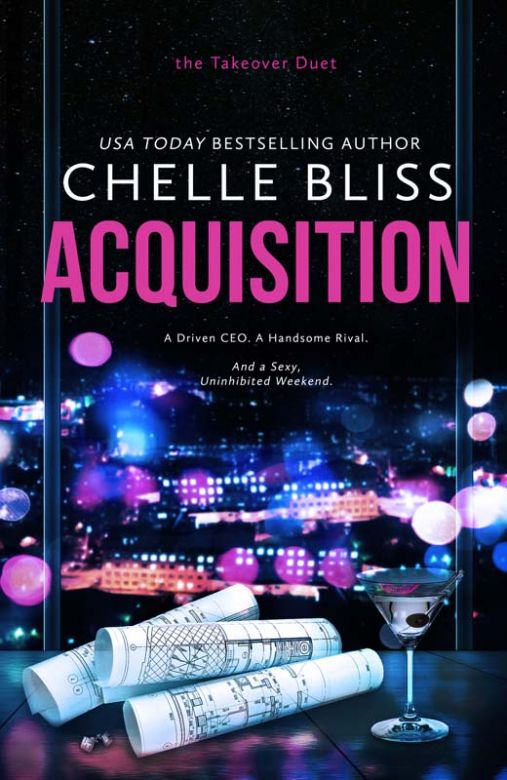 A ONE-NIGHT STAND with a handsome stranger wasn't a problem--until he tries to STEAL her company.

Ambitious, high-powered CEO Lauren Bradley is one press release away from catapulting her company to new heights. Rival CEO, Antonio Forte is arrogant, controlling, and sexy. She should know, since Antonio's a one-night stand she thought she'd never see again.

Antonio wants to take over more than her company, he wants her as part of the Acquisition.

Trent sits down, his straight brown hair wild and messy, fitting his mad scientist persona to a T. He places his hands behind his head and kicks back in the chair. “How much do you love me?”

I take a deep breath and count to three. I’m not in the mood for his flirtatious banter this early in the morning. But then again, I never am. “We’ve been over this before. You need to knock before entering my office. Strolling in like you own the place is not acceptable.”

Trent never did fully grasp the boundaries I’d put in place after we broke up. Being the CEO and his boss hasn’t earned me an ounce of respect in his eyes either. He comes and goes as he pleases, no matter how many times I’ve reminded him he can’t just breeze into my office like we’re still a couple.

“Come on, Lulu.” He gives me the classic Trent “I’m the man” chin lift.

I hate when he calls me Lulu. He gave me the nickname a few months after we started dating, and it always gave me the creeps. For being such a brilliant man, at times, he’s completely clueless.

“What do you want?” I try to keep the anger from my voice, but I fail miserably.

He shows off the dimple that I used to adore but now despise. “You lost your sparkle, sweetheart. What’s wrong?”

I rise from my chair, stroll to the front of my desk, and lean against it. “Skip the bullshit, Trent. It’s not going to work on me anymore.” Crossing my arms, I stare down at the man I once thought I loved. “What’s wrong with the design?”

He smiles smugly. “Nothing. It’s perfect.”

It’s hard to imagine a time when I believed Trent was charming, but I fell for him hook, line, and sinker.

My mouth falls open, and my arms drop. “It’s done?”

“You did it?” I whisper, gripping the edge of my desk, unable to believe what he’s telling me.

I shouldn’t be shocked that he found a way to make the engine work. It’s the reason I never fired him. Trent isn’t just a genius; he has the ability to rank right up there with Albert Einstein if he’s only given a chance.

He squares his shoulders and puffs out his chest, because Trent wouldn’t be Trent without his cockiness. “I did.”

“Do you know what this means?”

The enormity of this moment isn’t lost on me.

My heart beats wildly as my mind reels from the news.

Interstellar pulled off something no one ever thought possible, and Trent made it happen. Suddenly, I’m thankful I never fired him even if he’s a daily pain in my ass. I’m all about taking one for the team, especially when they come through in a big way.

He stands and invades my personal space with his aquamarine eyes gazing into mine. “That I’m a legend.” He moves closer, and I lean backward, trying to put more space between us. “Bound to be remembered for eternity.”

He cages me in, but in this moment, I’m not angry. How can I be after he just delivered the most amazing news? “Yeah, Trent, you will.” It’s true and ridiculous all at once. “But this means that we’re going to crush the bastards at Cozza.”

“It’s what you always wanted.” He starts to stroke the exposed skin on my arm. “We make an amazing team, Lauren.”

Team? We haven’t been a team in years, and even then, we were two entities that spent time together but didn’t gel as one. I was too busy busting my ass to climb the corporate ladder, and Trent, well, his brilliant mind never seemed to stay focused long enough. When we were a couple, he never paid as much attention to me as he does now.

The man doesn’t understand boundaries. Not only does he breeze into my office whenever he feels like it, but he touches me more than I’d like. By that I mean, if he touches me once, it’s too much. But I can’t knee him in the balls in my office. Even if he doesn’t act professionally, I must.

I dig my fingernails into the wood on the underside of my desk, and I narrow my eyes. I grit my teeth, but keep my voice down so the rest of the office doesn’t overhear. “Get your hands off me.”

His thumb brushes against my flesh, too close to my breast as he ignores my request. “The new engine is my gift to you. Someday, you’ll come back to me.”

“Trent.” I finally duck under his arm and move behind my desk again. I grip the back of my chair and raise my chin. “I appreciate the thoughtfulness behind your accomplishment, but there will never be an us again.”

“I’ll wait for you. Bask in the knowledge that it’s ready for the final test phase before we can launch it into production, Lulu.”

I wrinkle my nose and tamp down a growl that’s building in the back of my throat. “Thanks.” My tone is clipped and cold. “I look forward to reading your report and bringing it before the board for final approval. Can you have it on my desk before the end of the day?”

“Already done. Cassie has it.”

I’m at a loss for words.

Trent’s always been thorough but not when it comes to paperwork. The man could build anything with his hands, but ask him to write something down, and he becomes inarticulate and lazy.

I clear my throat. “I’ll call an emergency meeting and get the ball rolling ASAP.”

He turns to face me before he makes it to the door. “Want to have a drink with me after work to celebrate?”

“It’s never going to happen, Trent. We have a business relationship, and that’s it.”

I hold up my hand because I don’t want to waste another minute having this useless, repetitive conversation. “Trent, stop making a fool of yourself.”

I swear I hear him mumble bitch as he walks out, but I don’t say anything because I don’t want to give him a reason to come back.

Before I can sit, Cassie strides into the room holding Trent’s report. “Thank God he’s gone.”

“Tell me about it,” I mumble and hold out my hand, eager to read about the new engine. “Let me see that.”

She places the report in my hands. “I’m sorry he just walked in. I tried to stop him.” Her lips are pursed as she speaks, but I’ve told her a hundred times I never blame her for his intrusion.

She sinks into the chair Trent just occupied and kicks off her high heels. “Is there anything you need me to do right now?”

Cassie’s been my assistant and lifeline for the last five years. She’s always prompt and put together, dedicated to her job and to me, and I don’t know if I could do my job without her by my side.

Typically, she knows what I want and need before I do, but she also knows the report Trent has placed in her hands, ones I trust implicitly, is important to the future of the company and will consume my entire morning.

I open the report and push down on the spine with my index finger as my eyes start sweeping over the first paragraph. “Can you call an emergency board meeting for tomorrow morning at nine?”

“On it,” she says before leaving.

I sit for the next hour, reading word-by-word in complete awe. Most of the information has been so under wraps, even I didn’t know everything until now.

The cocky bastard had figured out a way to make the engine work without using jet or rocket fuel. No longer would we be the second-largest aerospace company in the world, we were going to rule the universe.

Interstellar is about to become the leader in travel. Not just airline travel, but his invention could be used to power ships into outer space and allow humans to travel farther than they’d ever gone before.

This is a game changer.

I’m one step closer to achieving my dream and my father’s.